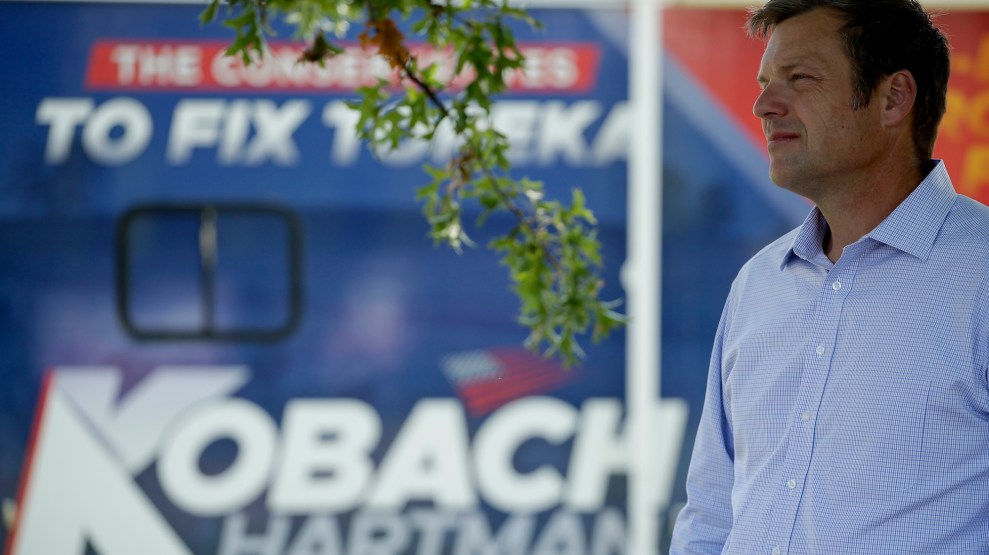 The Capital-Journal reported that the three men working on Kobach’s campaign were allegedly members of American Heritage Initiative, a spin-off of the alt-right college campus-based Identity Evropa, which seeks to rally college-educated white men to serve as the new face of the white supremacy movement.

Kobach spokeswoman Danedri Herbert acknowledged that the three men identified by the Capital-Journal worked for the campaign knocking on doors and delivering yard signs, but she denied that they were members of American Heritage Initiative, which she believes doesn’t exist. She asserted that the allegations were a “baseless” distraction kicked up in the final days of a heated primary battle.

A Trump ally and and extreme anti-immigration crusader, Kobach has a long history of pushing nativist policies and has ties to white nationalists. He is currently the secretary of state in Kansas, where he has sought to impose proof of citizenship requirements for voting, arguing that illegal immigrants were registering to vote in huge numbers and subverting state elections. The Kansas citizenship law he championed disenfranchised thousands of eligible voters between 2013 and 2016.

The ACLU sued to overturn the law, and Kobach represented the state in the lawsuit. In June, a federal judge struck down the law as unconstitutional and ordered Kobach to take a remedial class on the rules of evidence and civil procedure after finding that Kobach’s claims of massive voter fraud by immigrants were bogus. This week, she ordered Kobach’s office to pay the ACLU $26,000 in legal fees.

He now faces a tight race for the GOP nomination for governor; his primary competitor is incumbent Gov. Jeff Colyer. Republicans fear that if Kobach wins the primary this month, Democrats will have a serious shot at beating him in the general election in November because his views are so polarizing.

“Secretary Kobach isn’t a racist, and obviously, the campaign will not tolerate racism,” Herbert told the Capital-Journal. “It is baffling to me, a black woman who serves as Secretary of State Kris Kobach’s spokeswoman, that so many in the media are digging up fake news when they should be investigating real stories.”

Regardless of whether the campaign workers were official members of a white nationalist group, the history of at least one of them doesn’t reflect particularly well on Kobach. The Capital-Journal reports that last year, Kobach campaign worker Collin Gustin posted inflammatory comments on a discussion group for the Kansas Federation of College Republicans:

He posted an image of a student reading “Brown is the New White,” a book by Steve Phillips about a progressive, multiracial majority who could win elections if mobilized. In his comment under the photo, Gustin spells out the N-word in questioning whether someone lied about using it, and complained of people who are “openly anti-white.”

“These people know they’re not oppressed,” he wrote. “They just hate white people and are jealous of us. They know they can bully us with the oppression stuff until they’re granted EXTRA rights, because most have been brainwashed with disingenuous, weaponized, cherry picked history into white guilt. They won’t stop until we grow a spine. The USA is the least racist country in the world. We have so much racial tension because we ALLOW and SUBSIDIZE tens of millions of people from other groups to come here.”

Gustin has not responded to my request for comment. The Kansas GOP primary is Tuesday.