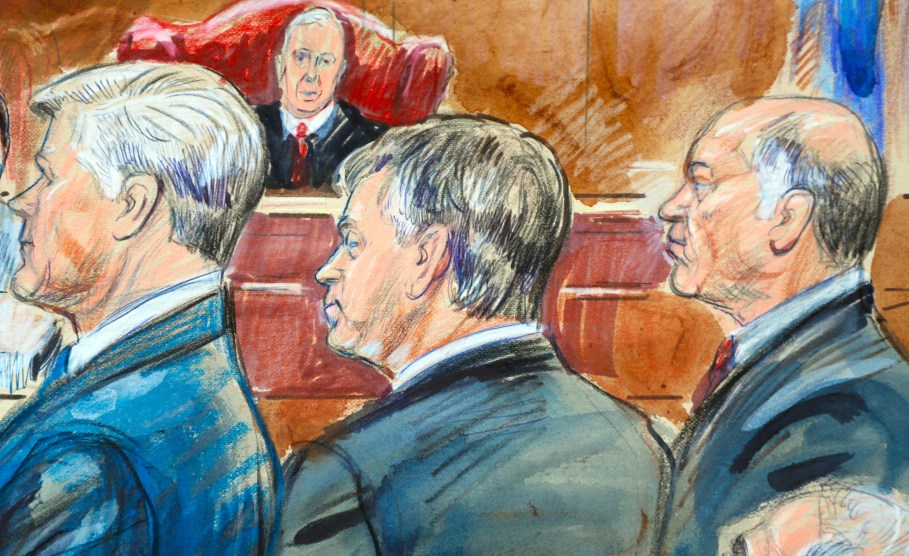 This courtroom sketch shows Paul Manafort, center, and members of his defense team Kevin Downing, left, and Thomas Zehnle, right,standing as they listen verdicts in courtroom in the bank fraud and tax evasion trial, at back center, in the courtroom of U.S. District court Judge T.S. Ellis III at federal court in Alexandria, Va., Tuesday, Aug. 21, 2018. Dana Verkouteren/AP

Paul Manafort has been convicted on eight criminal counts, but the legal saga surrounding President Donald Trump’s former campaign chairman is far from over. He still faces more criminal charges in the District of Columbia, where he is being prosecuted for additional counts of money laundering, failing to register as a foreign agent, and obstruction of justice—charges stemming from his work on behalf of politicians in Ukraine—and a witness tampering charge that was added after prosecutors say he tried to get two witnesses in the case to alter their testimony. That trial is slated to start next month.

And then there’s the big question of whether he could still cooperate with prosecutors to give them evidence implicating Trump himself. To sort all this out, we spoke with Channing D. Phillips, who spent nearly 30 years working in the Justice Department and most recently served as acting US Attorney for the District of Columbia:

Mother Jones: The jury deadlocked on 10 of the 18 charges against Manafort. What will happen to those charges?

Channing Phillips: [Prosecutors] can retry him on those 10 counts. If they do decide to retry him, do they retry him before the second trial? They may decide to go forward with the second trial first and then make a decision about whether it’s worth proceeding on the 10 counts the jury couldn’t decide today. I would want to get some feedback, talk to the jury, get a sense of what was the split was. That would influence my decision or the prosecutor’s decision as to whether to retry him.

They have enough with those eight counts, particularly with two of them being bank fraud, that he’s potentially facing some serious jail time. Especially if they can get a conviction in the second trial.

MJ: When is he likely to be sentenced on the eight counts he was convicted of Tuesday?

CP: The court will order a pre-sentencing report, and that usually takes up to six weeks, so it’s not likely that [sentencing] will happen before the second trial starts.

MJ: Is Manafort likely to appeal the verdict?

CP:  The first thing he might do is file a motion for a new trial. That would stay before [US District Judge T.S Ellis]. And then if Judge Ellis were to deny that motion, then he could appeal his conviction after he’s been sentenced. He can’t appeal the conviction until after he’s been sentenced. But he can file a motion for new trial now and will probably do so.

MJ: Could Manafort get out of jail in the meantime while all of these legal motions move through the system?

CP: Long story short, he’s not going to be released.

MJ: Manafort has thus far refused to cooperate with Special Counsel Robert Mueller, who is looking into Russian involvement in the 2016 presidential campaign, even though the case against him grew out of that investigation. Is it too late for him to change his mind and cut a deal with Mueller to stay out of jail or lessen his sentence?

CP: It all depends on what he has to offer. It’s not too late if his lawyers decided they wanted to work out something. I would imagine that Mr. Mueller and his legal team would be all ears. He would probably have gotten a better deal if he had not gone to trial, but the fact that he has a second trial in DC still gives him the opportunity to do something.

MJ: There’s been lots of speculation that Manafort had chosen not to cooperate with Mueller because he expected Trump to pardon him should he be convicted. Do you think that possibility colored the way he presented his defense in court? His lawyers didn’t call a single witness as part of his defense.

With a second trial looming, perhaps [defense lawyers] didn’t want to put their cards on the table prematurely. They wanted to roll the dice, and they felt comfortable with the cross-examination they engaged in. Some would say it probably backfired on them, but who knows?

MJ: Prosecutors made headlines during the trial when they introduced evidence that Manafort had wired hundreds of thousands of dollars in unreported income held in offshore accounts to make lavish purchases, most notably of expensive menswear that included a $15,000 silk-lined ostrich bomber jacket. What happens to the jacket now that Manafort has been convicted?

CP: Now that he’s been convicted, [the government] could potentially look at seizing those through forfeiture.

This interview has been lightly edited for clarity and length.