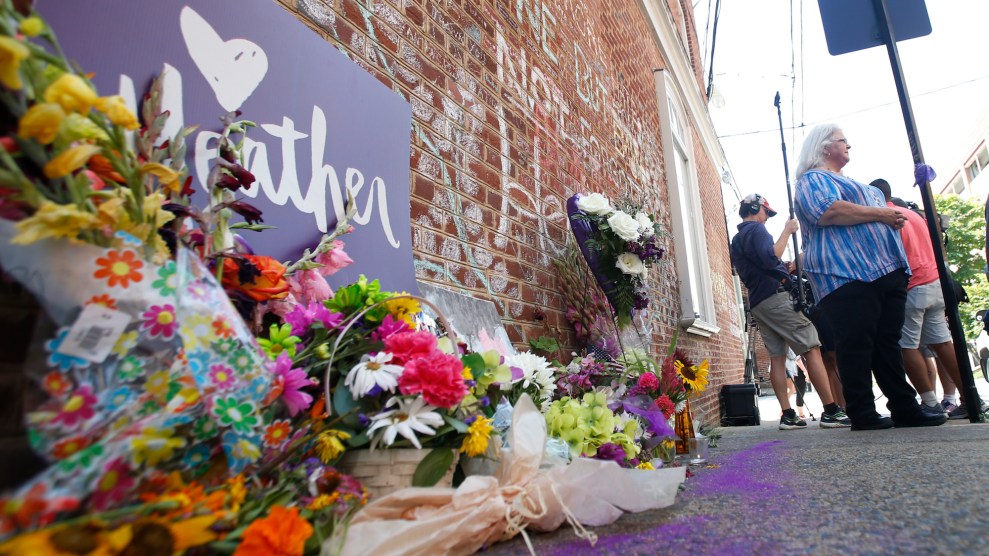 A year ago this weekend, Charlottesville was overrun with Confederate flags, swastikas, and torch-carrying white supremacists.

While much of the anniversary has been overrun with news about Unite the Right’s planned protest on Sunday in Washington, DC, many are using the weekend to honor Heather Heyer, the 32-year-old anti-racist counter-protester who was killed last year in Charlottesville when a suspected white nationalist drove a car into the crowd.

Good morning from #Charlottesville. Heather Heyer’s memorial nearly one year since she was killed pic.twitter.com/EaI7hJJ36K

Chalk messages to Heather Heyer all over the street where she was killed in Charlottesville. pic.twitter.com/PWCqfcQm3m

There is also a heavy police presence in Charlottesville this weekend and small groups of anti-fascist protesters:

#Charlottesville is not having any of it this weekend. pic.twitter.com/690WhaxBP0

After first tweeting a tirade against the FBI Saturday morning, President Donald Trump took note of last year’s violence, stating, “I condemn all types of racism and acts of violence. Peace to ALL Americans!”

The riots in Charlottesville a year ago resulted in senseless death and division. We must come together as a nation. I condemn all types of racism and acts of violence. Peace to ALL Americans!

Writers Jamelle Bouie and Jamil Smith noted that Trump’s continued emphasis on “all types of racism” and “all Americans” echoes his past reluctance to single out his white nationalist supporters for condemnation. Last year, he claimed there were “very fine people on both sides” in Charlottesville and condemned the “egregious display of hatred, bigotry and violence on many sides.”

Trump didn’t “call for peace,” @USATODAY. He used coded language—“all types of racism”—to signal his fellow white supremacists to feel as aggrieved as those whom they terrorize and kill. He sought to dilute the meaning of a word. Please do not do the same. https://t.co/iADeDLR3kO