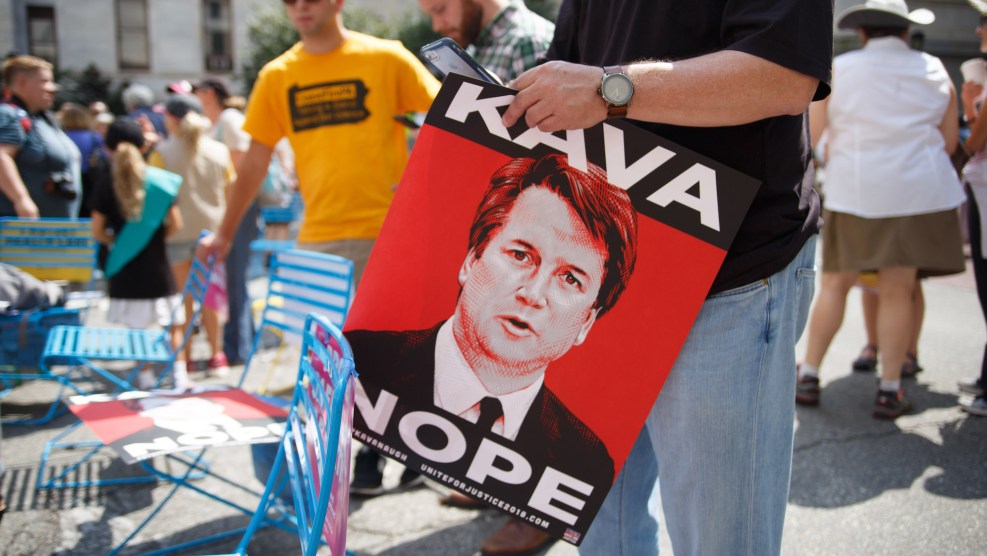 With confirmation hearings for Supreme Court nominee Brett Kavanaugh scheduled for next week, labor groups have been arguing that he would bring dangerously anti-worker attitudes to the court and bolster already growing pro-employer sentiment on the bench.

“Everything we know about Justice Kavanaugh’s record leads us to believe he would operate under a pro-corporation agenda over workers’ rights, over civil rights, and more,” said Lee Saunders, president of the American Federation of State, County and Municipal Employees (AFSCME), on an August press call. Advocates from AFL-CIO, American Federation of Teachers, Service Employees International Union (SEIU), and AFSCME have echoed calls by the Alliance for Justice and other liberal interest groups for the release of Kavanaugh’s records from his time as a lawyer for the George W. Bush administration.

“Kavanaugh’s record leads us to believe he would operate under a pro-corporation agenda over workers’ rights.”

While only around half of those documents have been made public, Kavanaugh’s decisions from his time as a Bush-appointed judge on the powerful US Court of Appeals for the District of Columbia reflect a long history of anti-union and anti-labor sentiment. The court regularly reviews suits challenging the decisions of Washington-based agencies, which has put Kavanaugh in a position to regularly author opinions and dissents assailing the authority of the National Labor Relations Board.

In the 2008 case Agri Processor Co., Inc. v. NLRB, the court’s majority held that undocumented workers’ “fear of detection and termination does not prevent them from sharing a community of interest with their coworkers,” granting them the same bargaining rights as their documented colleagues. But Kavanaugh dissented, arguing that undocumented workers didn’t count as employees under the National Labor Relations Act. While the ruling said the Supreme Court has “never explained how it would resolve” the conflict at the heart of the case, Kavanaugh disagreed, citing a 2002 high court ruling that he said was at odds with the majority’s decision. If confirmed, he could get a chance to weigh in on the Supreme Court’s meaning once again—this time as one of its members.

Kavanaugh joined two other Republican-appointed judges in a unanimous 2012 ruling in favor of the Trump Organization, after company executives asked the NLRB to throw out the results of a union election at Trump Plaza, arguing that support from politicians had introduced bias. As a July Bloomberg article points out, in 2015 Kavanaugh sided with the management of Sheldon Adelson’s Venetian Casino Resort in a similar case, authoring a majority opinion upholding the casino’s First Amendment right to summon police to issue citations to union protesters trespassing on company property.

Kavanaugh wrote a 2016 majority opinion overturning an NLRB ruling that allowed Verizon workers to display pro-union signs on company property despite having given up the right to picket in their collective bargaining agreement. Advocates argue that Kavanaugh’s consistent opposition to NLRB rulings stems from his well-known disagreement with the Chevron Doctrine, a legal principle established by a 1984 Supreme Court decision that stipulates that judges should defer to the expertise of federal agencies when they make reasonable rules or regulations.

One of Kavanaugh’s most high-profile dissents of NLRB authority was in a 2014 case against SeaWorld’s Florida theme park involving events depicted in the documentary Blackfish. When a killer-whale trainer died during a live show in 2010—the second death at the location—the Occupational Safety and Health Administration (OSHA) launched an investigation that found the theme park had willfully endangered its employees. The DC Circuit upheld the decision of a Department of Labor administrative judge, who ruled the theme park had violated OSHA guidelines and imposed a $7,000 fine.

In his dissent, Kavanaugh said OSHA was uncharacteristically trying to “stretch its general authority.” He said the SeaWorld employees’ position was no different than any other occupation where workers consent to put themselves in danger, comparing their work to tiger taming and football.

With only a week left before hearings, unions are putting their final plans into action.

“When should we as a society paternalistically decide that the participants in these sports and entertainment activities must be protected from themselves—that the risk of significant physical injury is simply too great even for eager and willing participants?” he asked, calling the “physical risk…among the greatest forms of personal achievement for many who take part in these activities.”

Earlier this month, union organizers boasted that members had already sent hundreds of thousands of messages to Congress opposing Kavanaugh’s nomination to the Supreme Court. With only a week left before his confirmation hearings, unions are putting their final plans into action. In the remaining days, SEIU plans to push members in swing states to meet with their senators to urge a vote against Kavanaugh and work with other unions to drive phone calls to Capitol Hill as confirmation hearings commence.

“SEIU members know all too well how important the Supreme Court is to upholding our rights to join together in unions, keep our healthcare and cast our ballots. We’ve seen this court attack our rights earlier this summer in the Janus case,” Mary Kay Henry, international president of SEIU, wrote to Mother Jones in a statement. “All Americans need a fair-minded justice who understands that the law should provide everyone with a level playing field and believes that everyone is created equal. Judge Kavanaugh is not that person.”

Kavanaugh’s nomination comes after the Supreme Court handed down a major anti-union decision in June, when a 5-4 majority ruled in Janus v. AFSCME that non-union public sector employees cannot be forced to pay dues to the unions that negotiate for them. Justice Samuel Alito, writing the majority decision, called such dues a violation of “the free speech rights of nonmembers,” overturning a unanimous 1977 Supreme Court decision finding that union dues were not a threat to the First Amendment.

Justice Neil Gorsuch, who was nominated by President Donald Trump, was the deciding vote.

Correction: An earlier version of this article misstated the name of the National Labor Relations Board.