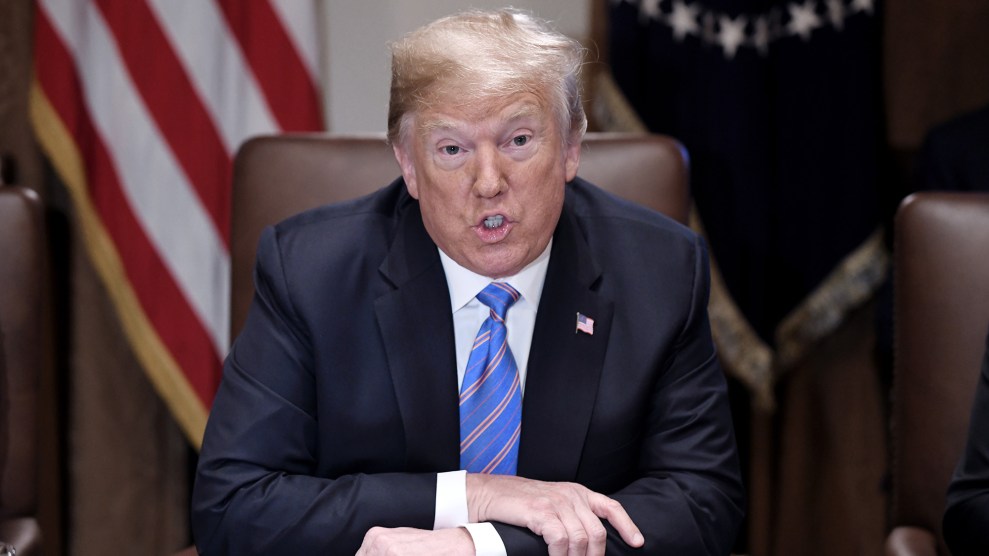 President Trump during a cabinet meeting on July 18, 2018 in Washington, DC.Olivier Douliery/CNP via ZUMA

President Trump lashed out at his longtime attorney and fixer early Saturday morning in response to the news Friday that Michael Cohen had recorded the pair discussing a payment to a playboy model who said she’d had an affair with Trump. Trump’s tweet came from his Bedminster golf club in New Jersey, where he is spending the weekend.

Inconceivable that the government would break into a lawyer’s office (early in the morning) – almost unheard of. Even more inconceivable that a lawyer would tape a client – totally unheard of & perhaps illegal. The good news is that your favorite President did nothing wrong!

The recording took place two months before the 2016 election, but apparently a payment never occurred. The National Enquirer, a publication with close ties to Trump, had already paid the model, Karen McDougal, $150,000 for the rights to her story in order to bury it, a strategy in tabloid journalism known as “catch and kill.” Trump’s attorney, Rudy Giuliani, confirmed the conversation happened but insisted it would exonerate his client. Cohen’s attorney, Lanny Davis, said the recording would “not hurt Mr. Cohen.”

Trump’s tweet initially returns to familiar territory in which the president lashes out at the FBI raid, back in April, when the recording was seized. But then he goes after at Cohen himself, suggesting that recording the conversation may have even been illegal. The spat comes at a time in the investigation when Cohen is reportedly considering cooperating with prosecutors, a move that many believe could prove disastrous for the president.