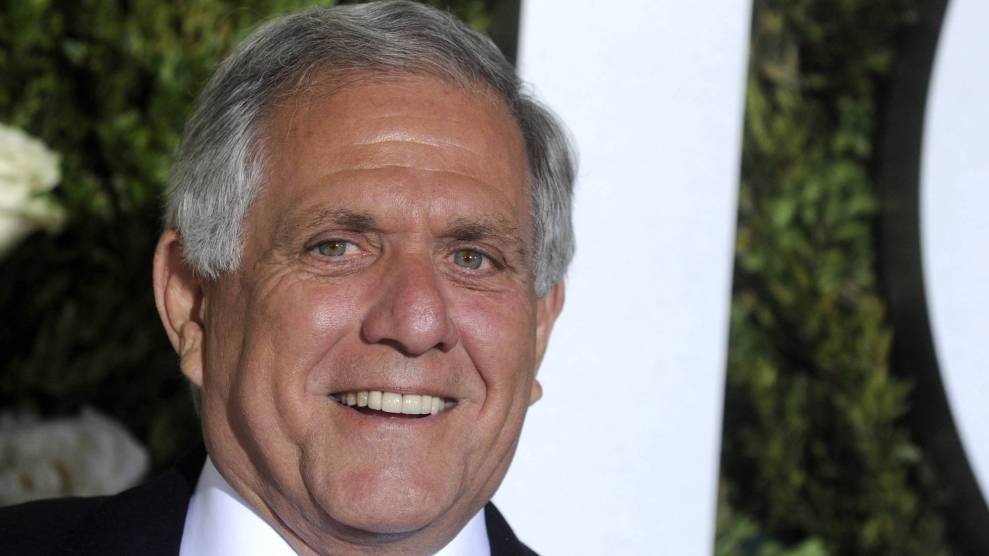 Sexual misconduct allegations against CBS chief executive Les Moonves have rocked the network, which saw its stock fall by more than six percent Friday after it announced an investigation into the charges.

A report by Ronan Farrow in the New Yorker described allegations by at least six women, including actress Illeana Douglas, writer Janet Jones, and producer Christine Peters. The women described Moonves, 68, forcibly kissing or groping them, often during professional meetings, in a series of incidents that occurred between the 1980s and the early 2000’s.

“What happened to me was a sexual assault, and then I was fired for not participating,” Douglas told Farrow. She said that during a pitch meeting at his office at 20th Century Fox in 1985, when he was a TV executive, Moonves pinned her down on his office couch with her arms over her head and “violently” kissed her. When she tried to leave, she said the door was locked, and that Moonves only opened it after she threatened to scream. “You can’t breathe. You can’t move,” Douglass said. “The physicality of it was horrendous.”

“You can’t breathe. You can’t move. The physicality of it was horrendous.”

This is the most recent of several significant stories by Farrow detailing sexual misconduct by powerful men in the media. His article about producer Harvey Weinstein won a Pulitzer Prize in April and helped launch the #MeToo movement. After reporting by Farrow and The New York Times, Manhattan District Attorney Cyrus Vance Jr. indicted Weinstein for two counts of rape and one first-degree charge of a criminal sex act related to alleged incidents in that occurred in 2004 and  2013. He was also indicted on three sexual assault charges related a 2006 incident.

In May, Farrow’s report, with Jane Mayer, on allegations by four women of physical abuse by New York Attorney General Eric Schneiderman resulted in his resignation. Farrow told the Associated Press that all the women he quoted in the story about Moonves overcame “a lot of fear of retaliation to tell very serious stories of sexual misconduct.”

Moonves in statement Friday expressed contrition but also downplayed or denied some of the allegations. He has indicated no plans to resign. “I recognize that there were times decades ago when I may have made some women uncomfortable by making advances,” he said. “Those were mistakes, and I regret them immensely.” Moonves claimed some of the allegations were false and asserted that he did not misuse his or harm or hinder anyone’s career.

Friday’s article described Moonves’ harassment as part of a broader culture at CBS, including its CBS News division. The report said that men in that division were promoted despite allegations of sexual misconduct that resulted in settlements with women who had made complaints. Farrow reports that 19 current and former CBS employees said Jeff Fager, who runs “60 Minutes,” enabled harassment. Some of the current and former employees also said Fager behaved inappropriately with female subordinates while intoxicated at company events. In November, CBS fired longtime host Charlie Rose over sexual harassment allegations.

“I recognize that there were times decades ago when I may have made some women uncomfortable by making advances. Those were mistakes, and I regret them immensely.”

In a separate statement issued to the New Yorker, CBS said it was investigating all the allegations in the article.

“CBS is very mindful of all workplace issues and takes each report of misconduct very seriously. We do not believe, however, that the picture of our company created in The New Yorker represents a larger organization that does its best to treat its tens of thousands of employees with dignity and respect,” the statement said. “We are seeing vigorous discourse in our country about equality, inclusion, and safety in the workplace, and CBS is committed to being part of the solution to those important issues.”

It’s not clear if Moonves can ride out the scandal, which comes amid a public legal battle with Shari Redstone, the majority stockholder of the CBS. Redstone sued the company and Moonves in May as part of complicated fight for control of the corporation. The allegations against Moonves could boost Redstone’s effort.