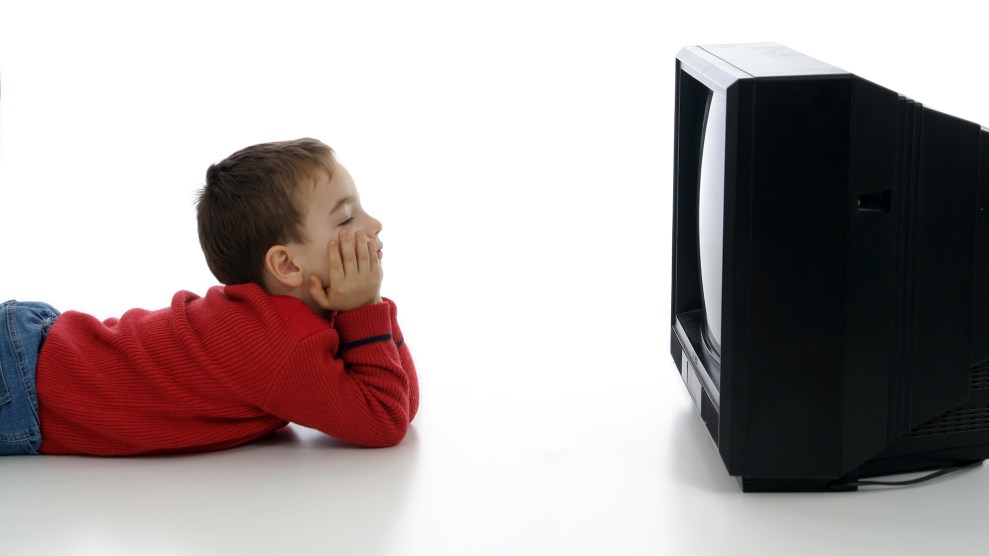 According to its website, the 60 Plus Association is a 26-year-old “nonpartisan organization working for death tax repeal and advocating for seniors” on issues like affordable prescription drugs and saving Social Security all while “adhering to less government, less taxes approach and the Constitution.” Their newest cause célèbre, however is a bit of a head-scratcher for a group advocating for retirees. In June, along with 25 other groups, 60 Plus filed a letter to the Federal Communications Commission in support of the FCC’s efforts to eliminate rules requiring TV stations to broadcast educational shows for kids. “Broadcasters should have more flexibility in organizing their schedules for children’s TV shows,” the letter says.

The other thing, aside from a disdain of state-enforced reruns of Liberty Kids , these groups have in common? Significant amounts of money from Charles and David Koch, two billionaire brothers who have funded an expansive and shadowy network of nonprofit groups that advocate for libertarian and deregulatory politics. 60 Plus Association, Americans for Prosperity, Americans for Tax Reform (and its tech-oriented subgroup Digital Liberty), Citizens Against Government Waste, Independent Women’s Forum (and its sister group Independent Women’s Voice) all have direct or circuitous financial ties to the conservative mega donors and they’re mad as heck about Saturday morning cartoons (at least, the “educational” ones).

Children’s television is just the next deregulation frontier for the small-government groups.

Its difficult to pinpoint exactly how much the groups have raked in from the Koch’s extended network of donors, but 18 of the 25 have public financial ties to the Kochs and their donor network. In an extensive 2014 investigation, Mother Jones found that six of these groups alone had raked in a combined $134 million in Koch funding. (60 Plus Association alone made up $53 million.) In 2016, Freedom Partners, one of the Koch’s main donor groups, gave over $48 million dollars to Americans for Prosperity and $50,000 to American Commitment. In 2015, the group gave $160,000 to the 60 Plus Association and $25,000 to the Hispanic Leadership Fund. (In 2016 the New York Times reported that the Koch brothers had allegedly cut official ties with the 60 Plus Association.)

The rules on children’s programming date back to 1990, when Congress passed the Children’s Television Act, a law which required broadcasters to include educational children’s shows in their programming. While the FCC initially didn’t set a specific mandate on the number of hours, in 1996 the agency wrote what are now know as the “Kid Vid” rules, which required over-the-air broadcasters (such as NBC and ABC affiliates) to run at least three hours of educational children’s programming a week to renew their free broadcast license. Since 2004, the agency has either considered or temporarily implemented other changes to the Kid Vid rule including banning advertising for online tie-in material, limiting pre-exemptions for live sports and news, and mandating an emphasis on “intellectual” over “emotional” programming.  Per the current guidelines, programming must serve the “the educational and informational needs of children as a significant purpose,” be at least 30 minutes long, regularly scheduled, and aired between 7:00 a.m. and 10:00 p.m.

But now critics say the regulations have far outpaced their original intentions, and failed to keep up with the age of online video streaming. Michael O’Rielly, a Republican- commissioner who is proposing new regulations, took to his blog in January to outline the “real world consequences” of continuing with the current rule. Among these costs included detrimental impacts from preempting local news coverage and killing shorter programs like “Schoolhouse Rock” that don’t meet the FCC’s minimum of 30-minutes in length. In June, the FCC announced it would vote during its July meeting to initiate a rule rewrite to modify Kid Vid.

This announcement alone was enough to trigger comments from both those in favor and opposed to the changes. The letter from the Koch-funded groups echoes O’Rielly’s talking points, claiming that the “FCC has broadly interpreted its ability to micromanage broadcaster content for children” and that current rules do “not contemplate the vast amount of children’s programming that is now available.”

“Kid-Vid regulations for broadcast TV may have been well-intentioned when originally passed, but they have not kept pace with the explosion of children’s programming from different sources including cable, streaming, and the internet,” Patrice Onwuka, senior policy analyst at Independent Women’s Forum, a conservative women’s interest nonprofit, wrote to Mother Jones in an email. “From our view, the opportunity to reform outdated rules in light of choice available to families today is a principled position that our supporters appreciate.” Other signatories to the letter did not respond to Mother Jones.

It’s not unusual for this collection of groups to team together when it comes to free speech or loosening carbon taxes, so it’s possible that children’s television is just the next deregulation frontier for the small-government groups. While children’s programming might not seem like the most important issue at Trump’s FCC, it plays into the agency’s larger push to rapidly modernize media regulations to favor broadcasters over consumers. In May of 2017, the agency released its Modernization of Media Regulation Initiative, seeking feedback from broadcasters on which rules to delete. By November, the agency voted to reduce ownership caps for companies like Sinclair Broadcast Group, an initiative that’s expected to come to a final vote in the coming months. O’Rielly has also been an outspoken proponent of reducing ownership caps.

The main problem with current regulations is not that they exist, but that the FCC rarely enforces them.

The FCC has also received comments defending the Kid Vids rules from groups including Campaign for a Commercial Free Childhood, Color of Change, and Center for Digital Democracy. In their letter, cosigned by seven other groups and one pediatric expert, the organizations express concerns that the current proposal does not consider how changing the regulations might decrease educational programming on streaming services that originate from broadcast stations and that the proposal includes a “vast number of unsupported claims and unanswered questions, as well the numerous negative effects on children.”

Critics say that not only will children who only have access to over-the-air programming lose essential educational programming, they fear that broadcasters will reduce production of it all together. Even now, what counts as “educational” is murky at best.  A 2008 study found that nearly 75 percent of stations lump their programming together on Saturday mornings, and many use crutches like wildlife shows instead of investing in programming that develops cognitive or intellectual skills. The Children’s Television Act calls for a diverse range of programming that benefits children up to the age of 16, something that such a limited array of programming is unlikely to achieve.

“I think the best thing we can do right now is to keep the rules as they are,” says Angela Campbell, a member of the board of directors for Campaign for a Commercial-Free Childhood and a professor of law at Georgetown University. She says that while updates are needed, the current push to end all regulation will “make a bad situation worse.”Campbell says the main problem with current regulations is not that they exist, but that the FCC rarely enforces them. While Campaign for a Commercial-Free Childhood would like to see requirements like those for over-air broadcasters extended to players in other mediums, like Amazon and Hulu, the FCC can only regulate broadcast and its unlikely that a grid-locked Congress would pass any new authority for the FCC.

She also doesn’t buy O’Rielly’s arguments that current requirements create problems for local news or live sports since most stations choose to block their education programming on Saturday mornings and often pre-empt the programming anyway. For example, between January and April 2018 WTTG, a D.C. Fox affiliate station, pre-empted one of its educational shows 11 out of 13 airdates. The channel’s quality “educational” offerings include Saved By The Bell, a show that originally aired between 1989-1993, more than a decade before most of the content’s current viewers were born.

As evidence to end the rule, the letter co-signed by the Koch groups points to the fact that Nielsen reports that only 0.5 percent of households with children would only have access to over-the-air television, and even that small group might be “accessing content like the PBS app on their wireless devices.” But that number doesn’t paint a full picture. According to a February 2017 Nielsen report, while nationally 25 percent of broadcast viewers relied on over-the-air, that number reaching up to 50 percent in some communities. Digital antennae use alone grew by one-third in the past four years.

And while, yes, many of those users might also have internet streaming, it’s not a given.  According to Pew Research Center, 12 percent of Americans are “smart-phone dependent,” meaning they rely on phone data for all internet needs—email, social media, job applications, and yes, entertainment. Last year, the FCC proposed initiatives to cut phone assistance to low-income consumers.