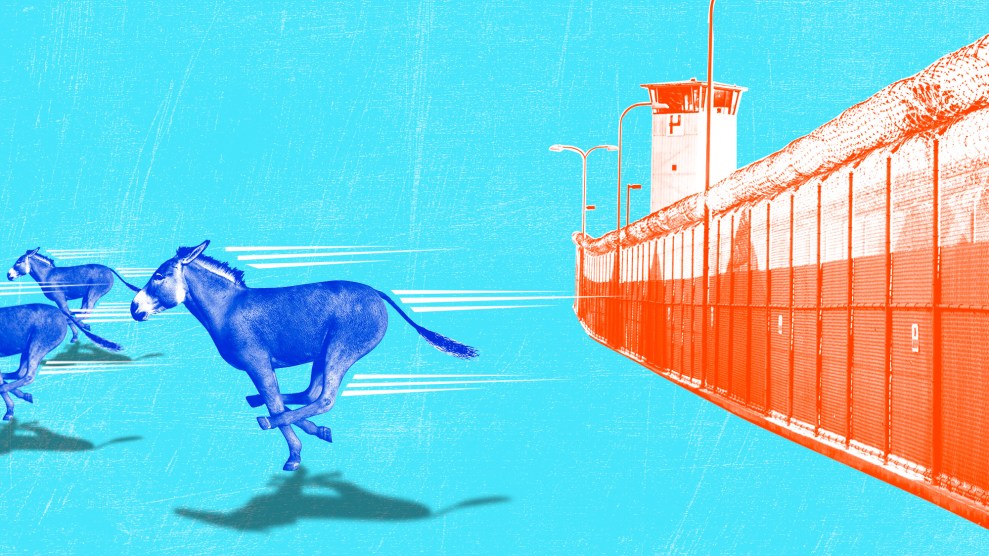 In a theater outside Miami last month, as a debate between four Democratic candidates for Florida governor approached the two-hour mark, 18-year-old activist ErrDaisha Floyd took the mic and turned the conversation toward a topic close to her heart: private prisons. The companies that run them “provide a direct incentive to contract-holders to ensure and keep large prison populations,” said Floyd, whose uncles have been held in for-profit correctional facilities. Addressing all the candidates, she asked, “Will you pledge not to accept contributions from these groups?”

It’s a question more and more Democrats have been confronted with in recent weeks as the Trump administration’s family separation and detention policies draw attention to American prison corporations, which lock up three-quarters of the people detained by Immigration and Customs Enforcement—including both adults and mothers with children—for profit.

“So long as the public is less aware of these issues, they can’t really punish the legislators who are taking money.”

The GEO Group and CoreCivic, America’s two biggest private prison operators, have long been significant political donors. They’ve traditionally and unsurprisingly favored Republicans, who have supported prison privatization as a cost-saving measure since the companies were founded during the Reagan administration. But like most corporations, they’ve hedged their bets—directing roughly 20 percent of their combined political giving over the past two decades to Democratic candidates, state parties, and committees, according to company profiles from the National Institute on Money in Politics.

As a result, contributions from the private prison industry have ended up in the war chests of some surprising names in liberal politics, including retiring California Gov. Jerry Brown, who received $91,200 combined from GEO and CoreCivic (then known as the Corrections Corporation of America) in his final gubernatorial race—the most of any Democratic politician in the past 10 years. The Democratic Congressional Campaign Committee—which accepted a $10,000 gift from the GEO Group last year—has also received $350,000 bundled by current and former private prison lobbyists this election cycle, according to one investigation. (The DCCC did not return a request for comment.)

Public awareness of the role private companies play as ICE jailers-for-hire has generally remained low, even though concerns over family detention and the conditions in for-profit prisons—which are typically less safe and secure than their government-run counterparts—flared up periodically during the Obama years. “So long as the public is less aware of these issues, they can’t really punish the legislators who are taking money,” explains Loren Collingwood, a political scientist at the University of California-Riverside.

But this summer, Trump’s separation of thousands of migrant families and stories of troubling conditions at some of the facilities where they were held put concerns about private companies that detain immigrants squarely in the national spotlight. And as scrutiny grows, Democrats increasingly appear worried that their practice of quietly accepting campaign cash from prison profiteers is evolving into a political liability.

“Some people think it’s OK to speak out against [hard-line immigration policies] while at the same time being deeply in bed with a company that works with politicians to put more people in jail.”

So while a slew of Democratic politicians took to Twitter and cable news to slam the administration’s hardline border policies, some have also been cleaning up their books. At least eight congressional Democrats have refused to accept attempted donations from GEO’s political action committee in recent months, according to the PAC’s July Federal Election Commission filing. That includes prominent party figures like Sens. Amy Klobuchar of Minnesota, Dick Durbin of Illinois, and Chris Coons of Delaware, as well as New York Rep. Hakeem Jeffries. And in late June, a spokeswoman for DCCC chair Rep. Ben Ray Luján of New Mexico confirmed to the Albuquerque Journal that Luján’s reelection campaign had donated $7,000 in GEO contributions to local groups helping immigrant families and victims of violence. At least two other Democratic members of Congress, when questioned by reporters about taking private prison contributions, have said they donated the money to groups like RAICES, which represents separated families. (To be clear, we’re not really talking about a ton of cash—so far this election cycle, CoreCivic and GEO have steered all but 6 percent of their roughly $1 million in spending on congressional midterm races toward Republicans.)

“We decided to make it a policy not to accept private prison donations because studies found for-profit prisons have lower staffing and training and have more violence and are less secure than public-run prisons,” the political director for Rep. Eric Swalwell (D-Calif.) told the Young Turks, explaining why the Swalwell campaign recently returned a GEO contribution. A spokesperson for Rep. David Price (D-N.C.), who returned a $1,000 GEO contribution this year, cited the Trump administration’s “cruel and inhumane family detention and child separation policies.”

Private prison cash has become a particularly fraught issue in Texas—a stronghold of the industry and the site of far more privately run ICE detention centers than any other state, including more than 10 run by GEO or its subsidiaries, as of 2017. Rep. Henry Cuellar (D-Texas), a moderate from a border district, has taken more money from private prison companies than any other congressional Democrat this election cycle and, in contrast to many of his peers, has been a vocal defender of such contributions. He’s gotten $36,400 from the industry so far this cycle, according to the Center for Responsive Politics. “GEO is one of the largest employers in my district and plays an important role in maintaining our public safety,” he said. “Without them, rapists, murderers, and other offenders would not be incarcerated.”

“Accepting donations from companies that profit from the systemic injustices and suffering that results from them is incompatible with the values and platform of our Party.”

Further down the ballot, in the race for Texas’ Senate District 19, state legislator Roland Gutierrez is making hay of a four-year-old $5,000 GEO Group donation to his opponent, former Rep. Pete Gallego. “No candidate should take contributions made possible through tearing apart families,” said Gutierrez, who says he donated a $250 contribution he received from GEO. In response, Gallego has vowed not to take campaign cash from “companies charged with implementing the insanely wrong policy of family separation.” (GEO does not hold separated children, though it does lock up parents whose kids were taken away at the border.)

Beyond Texas, the biggest movement is happening in other centers of the private prison industry: Florida and California. In Florida, home of the Boca Raton-based GEO Group, that’s largely thanks to pressure from a civil rights group known as the Dream Defenders, of which ErrDaisha Floyd is a member. The group has collected pledges from Reps. Debbie Wasserman-Schulz (D) and Charlie Crist (D) to not accept private prison donations, the Miami New Times reported, as well as from all four Democratic candidates at the gubernatorial debate. And in early July, the Florida Democratic Party passed a resolution that prohibited the party from taking money from the industry, as well as its affiliated PACs and lobbyists, over objections from “old-guard party officials,” as the New Times put it. “Some people think it’s OK to speak out against [hardline immigration policies] while at the same time being deeply in bed with a company that works with politicians to put more people in jail,” one Dream Defender activist told the paper.

The California Democratic Party soon followed suit, after a petition criticizing private prison contributions to San Diego Democrats spurred state Senate majority leader Toni Atkins to give away thousands she’d taken from the industry. On July 13, state Democratic Party chair Eric Bauman announced that the party would no longer accept cash from private prison companies, and that it would donate the money it has received since May 21, 2017—including $97,000 from CoreCivic and GEO—to pro-immigrant and prisoner-reentry organizations. California Democrats and the state party accounted for three-quarters of the money private prison companies spent on Democrats across the country between 2016 and 2017.

“Accepting donations from companies that profit from the systemic injustices and suffering that results from them is incompatible with the values and platform of our Party,” Bauman said in a statement.

“When we’re dealing with a mass incarceration crisis, we don’t need private industry incentives that may contribute—or have the appearance of contributing—to over-incarceration.”

The trend, though, isn’t limited to these few states. Some New Mexico legislators are donating or returning CoreCivic and GEO contributions. Even a Chicago alderman, in a state that bans private prisons, faced calls from left-wing activists to give up three years’ worth of donations from the GEO Group, according to the Chicago Tribune. The alderman, Raymond Lopez, said he knew GEO as the parent company of a drug treatment and outpatient facility in the neighborhood he represents, and at first didn’t understand what detention centers were—but this month decided to donate the $2,750 he received from GEO to a charity that supports migrants. “It’s become more widely known what their business model is,” he told the Tribune. “I know what perceptions can be.”

While Dems scramble, Republicans aren’t completely off the hook. New Hampshire Gov. Chris Sununu is facing calls from a Democratic challenger, Molly Kelly, to give up the $23,000 he collected from CoreCivic and GEO during his current and previous gubernatorial campaigns. (In response, New Hampshire Republicans have pointed out that the Democratic Governors Association has accepted $150,000 from prison companies since 2017.) And in Florida, activists have reportedly targeted Miami Rep. Carlos Curbelo, as well as Ashley Moody, a candidate for Florida attorney general who has taken $3,000 from GEO this election cycle.

Asked about the controversy over its campaign cash, CoreCivic spokesperson Amanda Gilchrist said in a statement, “We’ve partnered with the federal government under every administration—Democrat and Republican—for more than 30 years. These decisions appear to be rooted in politics.” GEO did not respond to a request for comment.

As the controversy over family separation fades from the headlines, it’s unclear if the lesson for Democrats will stick. Back in 2015, following revelations that Hillary Clinton’s presidential campaign had accepted thousands in contributions from private prison lobbyists, her campaign promised to donate direct contributions from the industry to charity. “We should not contract out this core responsibility of the federal government,” a Clinton spokesperson told Vice News at the time. “When we’re dealing with a mass incarceration crisis, we don’t need private industry incentives that may contribute—or have the appearance of contributing—to over-incarceration.” Then, in 2016, the Democratic Party platform declared the intention to “close private prisons and detention centers.” But the national party’s policies on accepting prison industry money still remain unchanged.