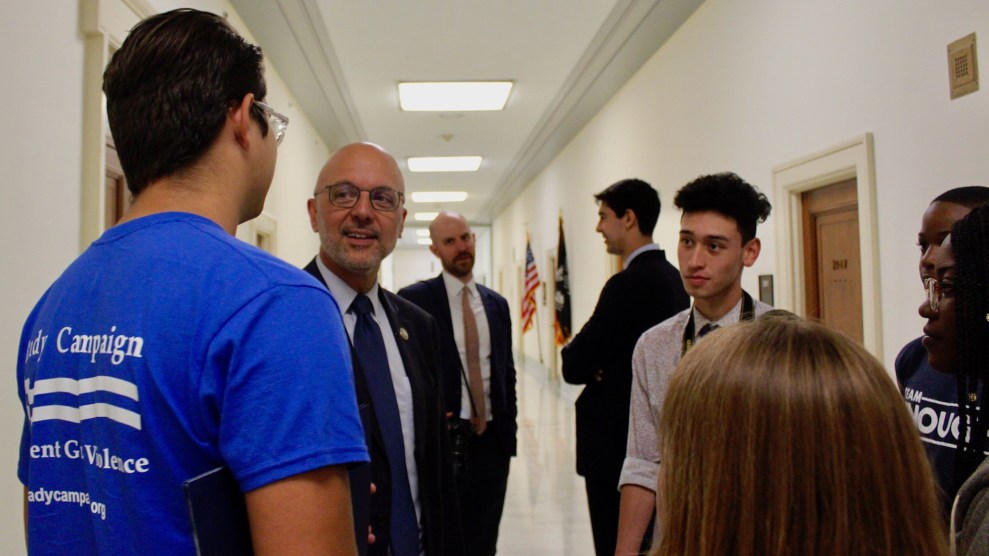 Student activists meet with Rep. Ted Deutch (D-Fla.) during their day of lobbying at the Capitol on June 28, 2018./Brady Campaign to Prevent Gun Violence

Fifteen-year-old Eden Hebron had never lobbied Congress before last Thursday—and before February 14, when three of her classmates were murdered in her classroom at Stoneman Douglas High School in Parkland, Florida, she’d never really shared her political opinions at all. But, like many of her fellow student survivors, Hebron’s first-hand experience with devastating gun violence had finally brought her to Washington, where she spoke with federal lawmakers about sponsoring the gun control legislation that currently lays dormant in Congress.

Hebron knows that none of the bills she asked lawmakers to sign onto will become law anytime soon. The widespread demands for gun control that followed the February school shooting haven’t been matched by legislative action. Republicans, who control Congress, have refused to even hold votes on gun control measures. It’s safe to say that her trip didn’t change any GOP minds.

“The only way to judge people in the absence of votes is co-sponsorship.”

But for Hebron, that wasn’t the point. With no votes to reveal where lawmakers truly stand on the issue, she wanted to know if the ones who had voiced support for gun control would actually be willing to put their names on legislation. And she got the response she’d hoped for: Sen. Ben Cardin (D-Md.), who was meeting with Hebron and other student activists as news broke of a mass shooting in his state capitol at The Capital Gazette newspaper, signed on as a co-sponsor for a so-called “red flag” bill that would take guns out of the hands of people who pose a risk to themselves or others. His office says that the students asking made the difference.

“We told them what we hope to see in terms of outcomes,” Hebron says, recounting her meetings with lawmakers. “It’s nice to know that we can trust those people in office [who say they’ll take action on this issue].”

Hebron is one of a 15 student leaders on Team ENOUGH, a new youth advocacy wing of the Brady Campaign to Prevent Gun Violence, which came up with an innovative approach for putting lawmakers on the record ahead of the midterm elections. With few meaningful votes on gun control to analyze, the group issued report cards last week that graded every member of Congress on their willingness to co-sponsor three “common sense” gun control measures that gained traction with the public following the Parkland shooting: expanded background checks, a ban on assault weapons, and a “red flag” bill. Legislators who co-sponsored all three measures received a “passing” grade, those who co-sponsored some of them received an “incomplete,” and those who co-sponsored none got a “failing” grade.

The purpose of this initiative, says Brady Campaign co-president Kris Brown, was to push members of Congress to measurably demonstrate where they stand on matters of gun control. While some lawmakers, especially Democrats, have touted support for all three measures, co-sponsorship presented a way to put their claims to the test. “The only way to judge people in the absence of votes is co-sponsorship,” Brown says.

After the effort’s announcement on May 22, Brown says, the Brady Campaign reached out to all Senate and congressional offices and asked the bills’ authors to remind their colleagues about their existence. Members of Team ENOUGH also spent two days in Washington asking Democratic lawmakers to sign onto the bills, which culminated on June 28 with the release of the report cards.

The push seems to have revitalized bills that had grown stale. Rep. Salud Carbajal (D-Calif.) introduced a “red flag” bill in May 2017 that saw some Democratic support in the months that followed. Nearly 50 members of Congress added their names to the bill in the weeks following the Parkland shooting, but progress quickly slowed. Then in June, 29 new co-sponsors, including a Republican, signed onto the bill during Team ENOUGH’s push. Carbajal’s office, which has a longstanding relationship with the Brady Campaign, attributed that renewed momentum to the report card initiative.

Nearly every Republican received a failing grade—just 17 GOP members of the House and Senate have co-sponsored legislation on any of these fronts. But many Democrats also fell short of the students’ expectations. Only nine of the 49 Democratic senators have co-sponsored all three bills, reinforcing the disconnect that Team ENOUGH had identified between lawmakers’ actions and their rhetoric. Sen. Mark Warner (D-Va.), for example, told CBS back in March that “militarized weapons need to be off our streets” and that he hoped the “kids continue to press” for restrictions on high-capacity magazines and assault weapons. But he hasn’t yet signed onto the assault weapons or red flag bills. One day before TEAM Enough’s deadline, however, Warner did sign onto the background checks bill—his office says he did so at the students’ urging. According to his office, Warnee is currently looking closely at the other two measures and had always intended to back this bill, but the report cards convinced him to do so more quickly.

The grading could prove uncomfortable for other Democrats, too, especially those facing tough reelection fights in states that Trump won. Sens. Jon Tester (Mont.), Joe Donnelly (Ind.), Heidi Heitkamp (N.D.), and Joe Manchin (W.Va.) received failing grades. None of those senators have ever been staunch gun control advocate, and all have recently received favorable ratings from the National Rifle Association. Sen. Claire McCaskill (Mo.), who also faces a fierce battle, received an “incomplete” for only cosponsoring a “red flag” bill, though she’s voted in favor of an assault weapons ban and expanded background checks during past sessions of Congress. Her office did not say why she wouldn’t co-sponsor the other two measures. Their recalcitrance might help them win over a few gun rights supporters, but it could also complicate their efforts to appeal to voters eager to see signs of movement on gun control.

The student activists say they were caught off-guard by the pushback they received from some Democrats. “We were surprised by some friction in a few of our meetings, but we’re proud of our effort, and we think it’s important to know where people stand.” said Anahi Ballesteros, a Team ENOUGH member from Stockton, California. “We know we’re asking for a lot, but you ask the most from your friends.”

Those difficult conversations had been informative on both sides. Sen. Tammy Baldwin (D-Wisc.), another Democratic senator with an “incomplete” grade, faces reelection in a state where nearly half of the voters own guns. Brown reported that the students activists’ meeting with  her office had been a “good mutual exchange” on the senator’s stance to not co-sponsor the assault weapons ban. “It was a really good discussion with the kids about ‘Here’s why we think you should be on all three, and we hope you’ll consider it,’” Brown says. Baldwin’s office also said she had a good meeting with the group, and noted that the senator had previously voted in favor of the measure.

The report card effort is just the first of many the student activists will pursue to keep gun control on the minds of politicians over the summer. In addition to lobbying Congress, many students plan to get involved in get-out-the-vote efforts—and they’ll be sure to let voters know the grades their representatives received on their report cards. The students “want to be active in their local communities,” says Brown. “You’ll be seeing more from Team ENOUGH.”