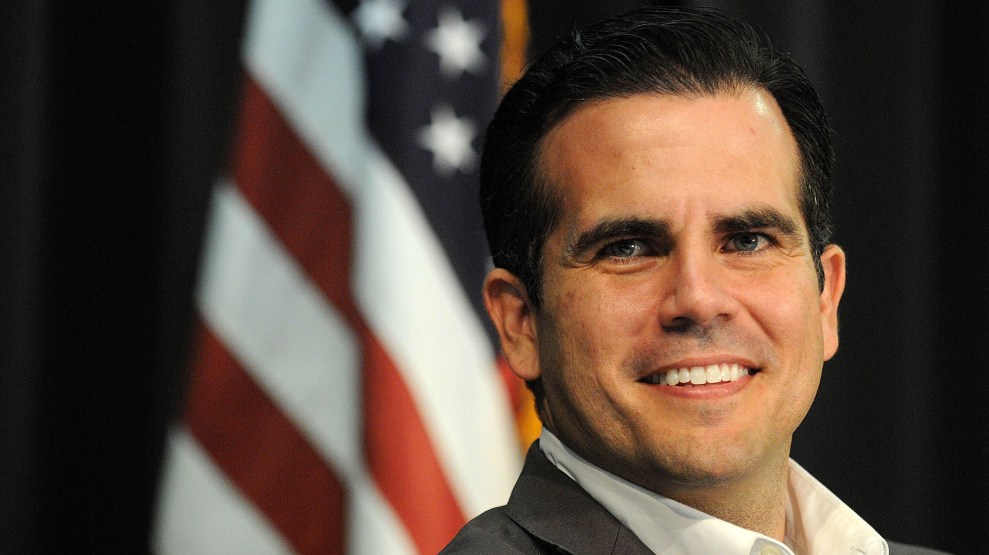 Puerto Rico Gov. Ricardo Rosselló is refusing to attend a Republican-led congressional hearing Wednesday that will focus on management upheaval at the island’s troubled electric power authority. In a letter sent Wednesday morning, Rosselló sharply criticized the House Natural Resources Committee’s actions, telling the panel’s GOP chairman that “my attendance would legitimize a political exercise that was organized for the sole purpose of promoting flawed legislation that would severely hamper” reconstruction efforts following Hurricane Maria. The governor added that he did not “appreciate your committee staff disparaging members of my team or trying to make me or my government look uncooperative or politically motivated” and that Puerto Ricans “face too many challenges to endure baseless, petty sniping from congressional aides.”

The letter, provided to Mother Jones by the Puerto Rican government’s office in Washington, DC, references a July 19 tweet from the committee’s official Twitter account. The tweet included a screenshot of a letter to Rosselló from the committee’s chairman, Rep. Rob Bishop (R-Utah), inviting the governor to Wednesday’s hearing to discuss the “continued disfunction” at the island’s government-run electric utility, known as PREPA. The tweet included the letter but also a message: “Call your office, @RicardoRossello.” The committee subsequently deleted the tweet, telling CBS News’ David Begnaud that the governor had asked them to remove it and that “working in good faith we have chosen to respect his wishes.”

The committee’s invitation came after PREPA CEO Walter Higgins, on the job just four months, resigned on July 14 after politicians on the island criticized his compensation package. Higgins was hired after former PREPA CEO Ricardo Ramos came under fire for awarding a $300 million electric grid repair contract to Whitefish Energy Holdings, a small Montana-based energy company that stood to make a profit of nearly 50 percent off its deal with the bankrupt island. Ramos resigned in November.

Higgins’ salary of $450,000 was coupled with a potential bonus of an additional $450,000 if he met certain benchmarks, according to the Wall Street Journal, which noted that Higgins had also faced criticism for “hiring an associate under a $22,500 monthly consulting contract.” After Higgins resigned, five of seven PREPA board members also resigned, citing political interference. The authority then hired Higgins’ successor, at a $750,000 salary, but that candidate withdrew after just one day on the job because of the outcry over his pay. Rosselló named yet another CEO on July 18, Jose Ortiz, who accepted a salary of $250,000, which he called “adequate.”

The median household income in Puerto Rico is $19,606, and more than 43 percent of the island’s residents live at or below poverty level, according to US Census data. A number of Puerto Ricans remain without power more than 10 months after Maria ripped the island apart and destroyed the electric grid, which was already suffering from years of chronic underfunding and mismanagement and facing billions in outstanding debts.

In January, Rosselló unveiled a plan to privatize PREPA, an idea that has been met with heated opposition from some on the island but supported by a majority of the members on the fiscal control board created by the US Congress in 2016 to take control of the bankrupt territory’s finances and ensure payment to creditors. Rosselló said in his letter to Bishop on Wednesday that he was willing to work with Congress and relevant federal agencies but that it would be “unnecessary and inappropriate for Congress to give the Department of Energy control of PREPA, effectively robbing the island of a critical resource at a perilous time for Puerto Rico.”

A committee staffer told reporters Tuesday that a federal takeover of PREPA was not “in the cards,” according to MarketWatch, though proposals to give Washington more control and oversight of the utility were reportedly on the agenda for Wednesday’s hearing. Earlier this year, Rosselló accused Bishop of working to “usurp” the government of Puerto Rico and of prioritizing the needs of hedge funds and other creditors over the island’s people.

“I am committed to working with Congress in a productive and constructive fashion,” Rosselló wrote in his letter, “but for that to be possible the terms of engagement must be based on respect, decency, and dignity.”

Read the full letter below, along with the written testimony Rosselló submitted to the committee:

<a href=”https://assets.documentcloud.org/documents/4618044/Letter-From-Governor-of-Puerto-Rico-to-Chairman.pdf”>Letter From Governor of Puerto Rico to Chairman Bishop (PDF)</a><br />

<br /> <a href=”https://assets.documentcloud.org/documents/4618044/Letter-From-Governor-of-Puerto-Rico-to-Chairman.txt”>Letter From Governor of Puerto Rico to Chairman Bishop (Text)</a><br />