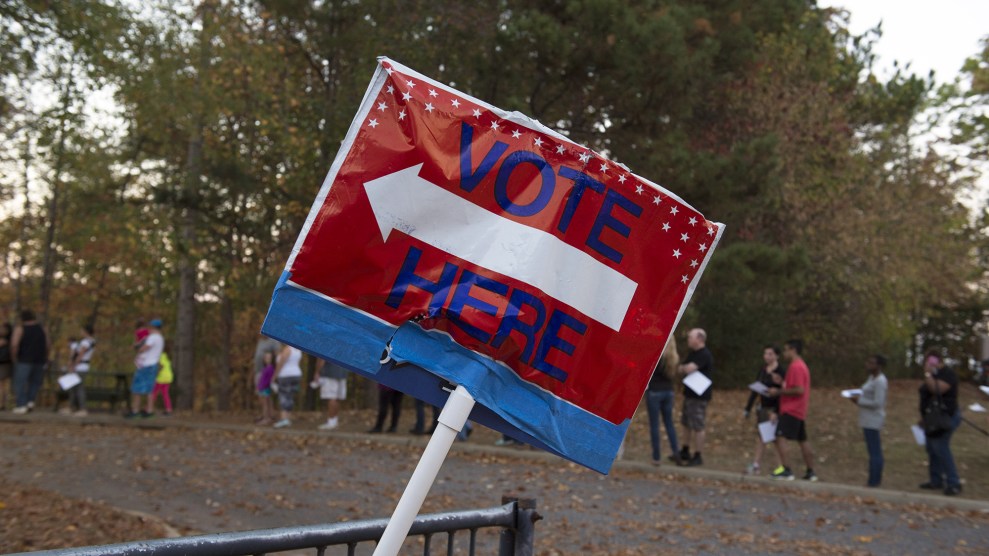 Voters wait in line past the 7 p.m. closing time in a north Atlanta suburb on last day of early voting in Georgia in November 2016.Robin Rayne Nelson via ZUMA

Voters are being deleted from the rolls at a significantly higher rate than they were a decade ago, creating the possibility that an increasing number of citizens will be disenfranchised in the 2018 midterm elections and beyond.

According to a new study from the Brennan Center for Justice, nearly 4 million more names were deleted from the rolls between 2014 and 2016 than in a comparable period between 2006 and 2008—a 33 percent increase that far outpaces the increase in the number of eligible voters. Purging is the process by which election officials keep the rolls up to date by removing people who have moved away or died. While careful purging is a necessary part of election administration, aggressive purges have long been used as a voter suppression tool, and often target poor and minority voters at significantly higher rates.

“This fall, millions of Americans may head to the polls only to find their names aren’t on voter registration lists anymore,” Myrna Pérez , an attorney at the Brennan Center and one of the report’s authors wrote in a New York Times op-ed Friday. “These voters may have to cast provisional ballots. Or worse, they could be turned away.”

“This fall, millions of Americans may head to the polls only to find their names aren’t on voter registration lists anymore.”

The rise in the purge rate is particularly significant in southern states with a history of racial discrimination. Until 2013, these states were unable to make changes to their voting laws or procedures without federal approval, a process under the 1965 Voting Rights Act known as “preclearance.” But five years ago, the Supreme Court gutted the law in Shelby County v. Holder, and states and counties previously under preclearance were free to amend their laws without approval. The result is a long list of new laws and other changes that disproportionately affect minorities, including voter ID laws, precinct closures, and date changes for local elections. According to the Brennan Center’s report, higher purge rates may be another result of the Supreme Court’s action.

The report singles out Texas and Georgia, both conservative states that have begun to trend purple in recent years, and where Democrats have a chance for the first time in years at capturing statewide offices this November. The report finds that in Texas, “approximately 363,000 more voters were erased from the rolls in the first election cycle after Shelby County than in the comparable midterm election cycle immediately preceding it.” Georgia, the study found, “purged twice as many voters—1.5 million—between the 2012 and 2016 elections as it did between 2008 and 2012.”

It’s possible that more aggressive purges are simply removing people who are no longer eligible yet lingering on the rolls. But the study, which used Election Administration Commission data from 2008, 2010, 2012, 2014, and 2016 to calculate removal rates, has found evidence that eligible voters are being kicked off the rolls. In some jurisdictions where the purge rate went up, so too did the number of voters who showed up to vote, but who were told they were not registered.  This fact was captured in a statistically significant rise in provisional ballots cast. In Georgia, for example, “provisional ballot rates in the federal elections of 2010 and 2014 correspondingly increased as the removal rates increased.”

Aggressive voter purges are emerging as a new and critical front in battles over voting rights. For several years now, a small group of conservative activists have used the threat of litigation to scare counties into removing more people from the rolls, even filing lawsuits to force counties to use more aggressive purges. And last month, Ohio won a case before the Supreme Court that made its aggressive purging program legal nationwide.

Under the Trump administration, the problem is likely to get worse. Rather than intervening to stop aggressive purges, the Justice Department under Attorney General Jeff Sessions is taking steps to support the conservative activists urging more aggressive ones. “[The] Justice Department has sent letters to election officials inquiring about their purging practices—a move seen by many as laying the groundwork for claims that some jurisdictions are not sufficiently aggressive in clearing names off the rolls,” the report noted. Indeed, those fears are already playing out. Last month, the administration joined conservative activists in their lawsuit against Kentucky to force the state to ramp up its purge practices.