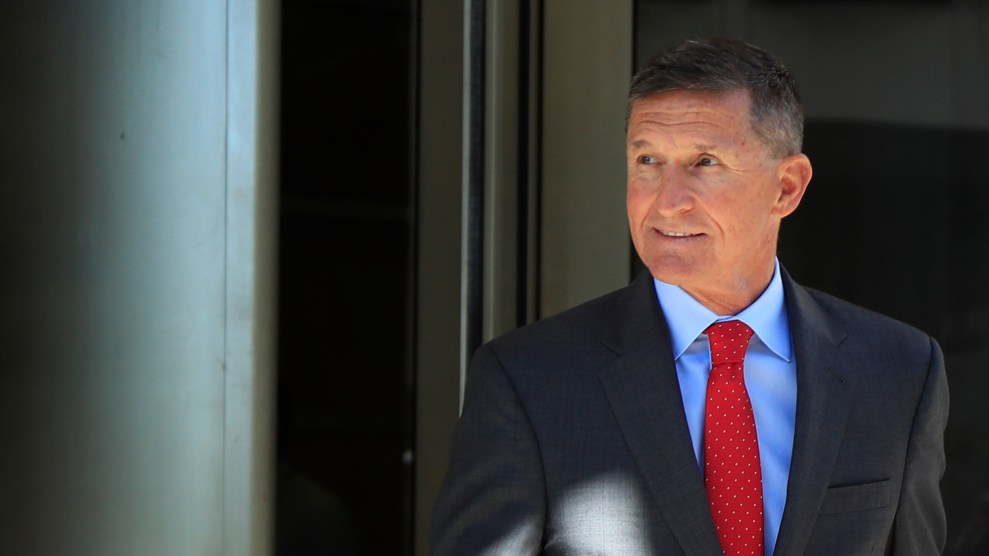 Update: Shortly after Michael Flynn was quoted in a press release announcing that he had joined a new lobbying firm, Stonington Global, his lawyers issued a statement disputing the announcement: “General Flynn has not joined Stonington and did not personally issue any public statement. He was aware that a statement was being drafted, but he did not intend that it be issued at this time. Its issuance now in his name appears to have been the result of a misunderstanding.” Responding to Flynn’s attorneys, Stonington’s principals, Nick Muzin and Joey Allaham, issued a new statement Tuesday night that suggests Flynn will still join them, though perhaps not as quickly as they believed. “We cannot comment on General Flynn’s considerations about the timing of the announcement, but we have faith in his patriotism and long history of service to our country,” they said. “We look forward to working together.”

Michael Flynn is getting back into the lobbying business.

Even as he awaits sentencing, Flynn announced on Tuesday that he is joining a new consulting firm, Stonington Global LLC, launched by two lobbyists known for their work for Qatar: Nick Muzin, a former staffer for Sen. Ted Cruz (R-Texas) who also worked for Trump’s campaign, and Joey Allaham, the ex-owner of several kosher steakhouses in New York who recently took up foreign lobbying.

“I am excited to begin this new phase of my career as Stonington’s Director of Global Strategy,” Flynn said in a statement. “Joey and Nick have a dynamic vision and have demonstrated the ability to deliver transformative positive results in global affairs. The world is changing rapidly, and now is America’s moment to lead.” Flynn’s son, Michael Flynn Jr., is also joining the firm.

The firm did not announce any clients, but Allaham tells Mother Jones he expects to sign up defense contractors. In a video and press release, the firm says it will offer “government consulting, defense procurement, and public affairs” services and “help private investors and sovereign wealth funds develop and execute investment strategies.”

Flynn’s new venture appears to reflect his need for income amid steep legal bills. In March, ABC News reported that he put his Virginia home up for sale to help cover his legal expenses. Flynn has also set up a legal defense fund.

“The man has to work,” Allaham says. “His wife wants him out of the house.”

Muzin is a defendant in a lawsuit filed in federal district court in California by Elliott Broidy, the owner of a defense contracting firm who was forced to step down from a top Republican fundraising post after admitting he agreed to pay $1.6 million to a former Playboy Playmate, Shera Bechard, to cover up an affair. Broidy alleges that Muzin aided a supposed Qatari scheme to disseminate emails hacked from Broidy’s account to new outlets. Muzin denies the allegations. Broidy is among critics who have accused Qatar of funding terrorism. Allaham has been deposed as a witness in that lawsuit. Broidy’s legal team has subpoenaed Allaham and Muzin for communications related to their work for Qatar.

Last month, amid that legal wrangling, both Muzin and Allaham cut ties with Qatar. At the time, Allaham, who had previously been paid $1.45 million by the Qatari government, blasted the nation. “Qatar enjoys portraying themselves as the purveyor of peace in the region, but this could not be further from the truth,” he told Politico.

In a press release issued on Tuesday, however, Allaham and Muzin touted their work for Qatar: “In launching the new firm, founders Muzin and Allaham will build on their success representing the State of Qatar, which in the course of eight months saw the Gulf Emirate go from isolation, blockade, and Presidential criticism, to the strengthening of the US-Qatari security and economic relationship, culminating in the bilateral Strategic Dialogue and subsequent Oval Office meeting between President Donald Trump and the Emir, Sheikh Tamim bin Hamad al Thani.”

Allaham tells Mother Jones that Flynn’s long military record, which culminated with his tenure as the director of the Defense Intelligence Agency, outweighs any worries over his legal status. “He has 30 years of experience, 3 stars. He will get out of it sooner or later, ” Allaham said in a text message, referring to Flynn’s legal issues. “We are lucky to have someone [of] his status.”