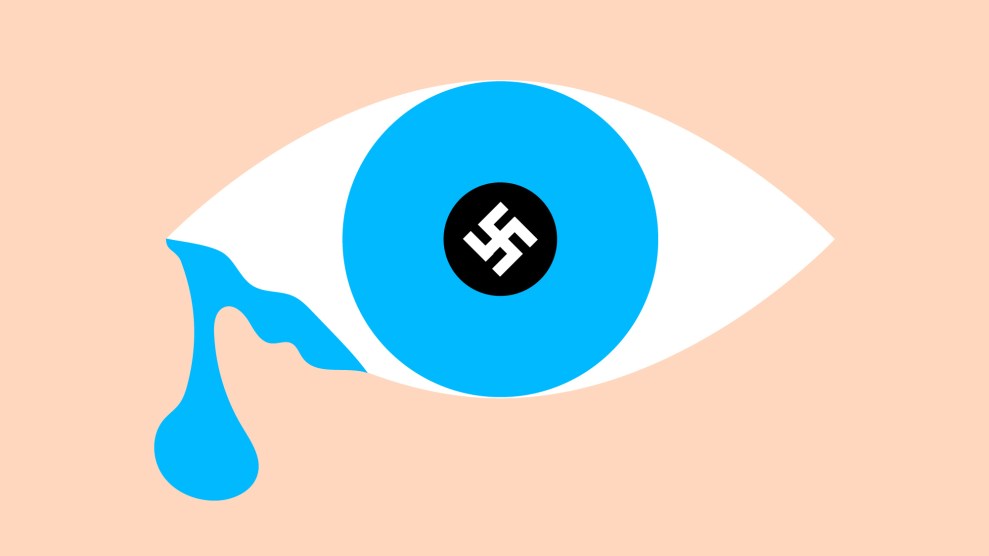 Nearly all right-wing extremists have something in common: They’re men. Without addressing this fact, it is impossible to make sense of hate groups or try to eradicate them, argues Michael Kimmel, a sociologist at Stony Brook University who has written several books about masculinity and gender. For his most recent, Healing From Hate, he interviewed former extremists about the psychological and economic factors that drew them into violent white supremacist groups.

Mother Jones: You write that “American white national­ism offers American men the restoration of their masculinity.” How does it fulfill that promise?

Michael Kimmel: These guys believe something has been taken from them that they were entitled to, that they deserved, and it was given to people who don’t deserve it, like immigrants and gay people and women. Joining up is a way to get it back, to restore your masculinity. The white nationalist organizations are fairly explicit in this: “Join us and you feel like a real man. Join your brothers, your comrades. We have a sacred mission to preserve the white race.” All this stuff is designed to say, “I’m retrieving what’s rightfully mine.” The feeling of being emasculated comes from a feeling of entitlement. Entitlement is what fuels the anger and desire to restore what’s “rightfully ours.”

“In order to get these guys out, you have to understand the emotional and visceral draw that pulls them in the first place. It’s not the ideology.”

MJ: White supremacy in the United States is nothing new. Is the feeling of emasculation and victimhood that drives men into white supremacist groups unique to this moment?

MK: Almost every one of the guys I talked to was downwardly mobile, lower-middle class. They made a bargain, the bargain of the 1950s: “I will work hard, I will pay my taxes, I will be a good citizen, and in return for that, I—the man, the breadwinner—I alone should be able to support my family and buy a house.” There are economic forces that are depriving these guys of the bargain that their fathers and grandfathers made. Global­ization and neoliberal economics have meant that Walmart has moved in, the mom-and-pop place has closed. All those heavy manufacturing jobs have disappeared—no matter what President Trump promises, it’s a done deal. Now at the same moment that these economic changes are happening, you have all these other groups shouting out for their rights, and these guys feel like, “Well, wait. What about us?”

MJ: What makes one white man become a pissed-off Trump voter and another join a hate group?

MK: Two things turn guys to this movement. First, there’s a conscious and deliberate manipulation of the emotions of despair and confusion by those on the right, who basically massage these emotions into a politicized anger. The second thing is, it has to be experienced as something you’re moving toward. You feel isolated and alone and despairing. You feel like you’re failing your family. Then these guys come along and say, “No, you’re great, you’re awesome. You’re one of us. We are your brothers.” You get community, camaraderie; you get people who are validating your masculinity. Then, of course, the sacred mission of preserving the white race.

MJ: You write that it’s this feeling of belonging that’s the primary appeal, not necessarily the racism or the ideology.

“I’m not gonna be able to persuade a guy to leave the movement because I say to him, ‘You know, I think your interpretation of page 156 of Mein Kampf is wrong.’”

MK: The recruitment process is really about emotion. In order to get these guys out, you have to understand the emotional and visceral draw that pulls them in the first place. It’s not the ideology. But I do think one of the big drivers is this economic displacement.

MJ: What do you think about “Nazi punching”? Does that serve a purpose if your ultimate goal is to have fewer people in hate groups?

MK: I don’t think it’s particularly effective as a way to get guys out. Nazi punching is expressive but not instrumental. It’s expressive of your own frustration and anger and rage at these guys, their ideas, their visibility and newfound legitimacy in this administration. But it doesn’t shut them down, and it doesn’t get them out.