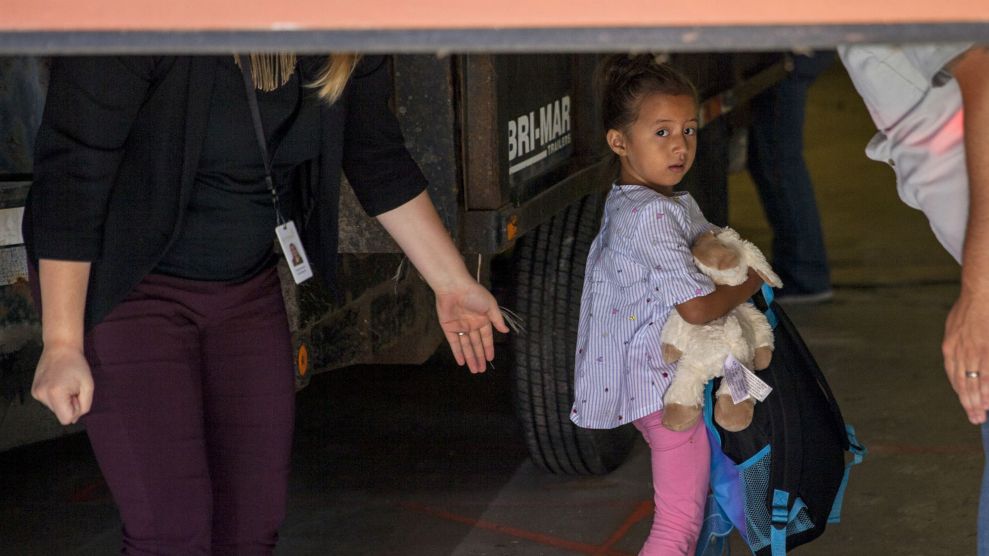 Trump’s nominee to lead the Consumer Financial Protection Bureau has no background in consumer finance or banking.

But in her role at the White House Office of Management and Budget, Kathy Kraninger oversaw the Departments of Homeland Security (DHS) and the Department of Justice—two federal agencies that have recently come under fire for implementing the administration’s policy of separating families at the border. While Kraninger and the White House have declined to discuss the matter ahead of a scheduled Thursday confirmation hearing, according to former federal employees familiar with OMB, White House meeting records, and several Senate offices, it is quite likely she played a significant role in implementing the policy.

According to Kenneth Baer, an associate OMB director under Obama, Kraninger’s role at the office was a “senior” and “key” position, equivalent to an assistant secretary at other federal agencies. “It’s a pretty big job, in that you’re kind of the point person for the executive office of the president to make sure policies are implemented,” he added, explaining that the work includes not just budget preparation, but broader involvement in agency policy.

“For those of us who know how OMB and the federal government function, it stands to reason she was very involved,” says Baer. “She has to answer some questions.”

Seth Grossman, who served as a deputy general counsel at DHS during the Obama Administration, agrees that Kraninger would have helped craft the administration’s actions. “For a policy of this consequence, and also involving two departments—both DHS and Justice—it would be very, very likely that this person would be very involved. Not just informed, but involved, both on appropriations and on the policy implementation,” says Grossman.

Last month, Sens. Elizabeth Warren (D-Mass.) and Sherrod Brown (D-Ohio)—the committee’s ranking Democrat—sent a letter to Kraninger demanding she provide documentation and explain any part she played in the administration’s “cruel” policy of taking children away from their parents following arrival at the border. “The American people deserve to know what role you have played in developing and implementing this appalling process,” the senators wrote. Sen. Warren vowed to hold up Kraninger’s nomination if they didn’t get answers.

Late on Tuesday night, all twelve Democratic members of the Senate Banking Committee sent a letter to chairman Mike Crapo (R-Id.) asking him to push the Trump administration to respond to their outstanding record requests before Thursday’s hearing—and if it doesn’t, to postpone the meeting until the information is provided. Without the documents, the senators wrote, “we will not be able to conduct the kind of oversight and questioning that allows the Senate to perform its constitutional role of providing advice and consent.”

While such meetings would be routine given Kraninger’s job, OMB has kept silent on her role in the family separation program. Sen. Brown told the Cleveland Plain Dealer last week that Kraninger has not responded to his and Sen. Warren’s letter, or to questions he’s personally asked her about her involvement in the border policy. As of Tuesday, that was still the case, a Senate banking committee staffer told Mother Jones: “Neither Kraninger nor anybody else in the Administration have responded,” adding that if “she had no part in arranging family separations, she should say so. If she did, she should say what it was.” OMB did not respond to Mother Jones’ requests for comment.

“A close look at her record shows consistent mismanagement, often with devastating results for poor and vulnerable people.”

Early on Wednesday, Sen. Elizabeth Warren’s office released a staff report underscoring Kraninger’s likely involvement in family separations. “As a top White House budget official with oversight of the two agencies most involved in implementing the Zero-Tolerance Policy, Ms. Kraninger historically would have been responsible for working with senior administration officials to develop the policy,” notes the report.

“The result of this mismanagement was a humanitarian crisis; hundreds of young children have been separated from their parents for weeks or months,” says the report, before concluding that Kraninger’s “record does not justify a massive promotion to lead the federal agency charged with protecting consumers.” Warren’s report suggests that Kraniger’s potential involvement in separations is relevant not only because the policy was “inhumane,” but because its implementation was bungled: “The entire case for her nomination rests on her purported management abilities. Yet a close look at her record shows consistent mismanagement, often with devastating results for poor and vulnerable people,” Warren’s report says.

Earlier this month, the administration missed a court-imposed deadline to reunify children under five with their families. On Monday it announced it could not yet find the parents of up to 71 separated children from 5 to 17 years old.