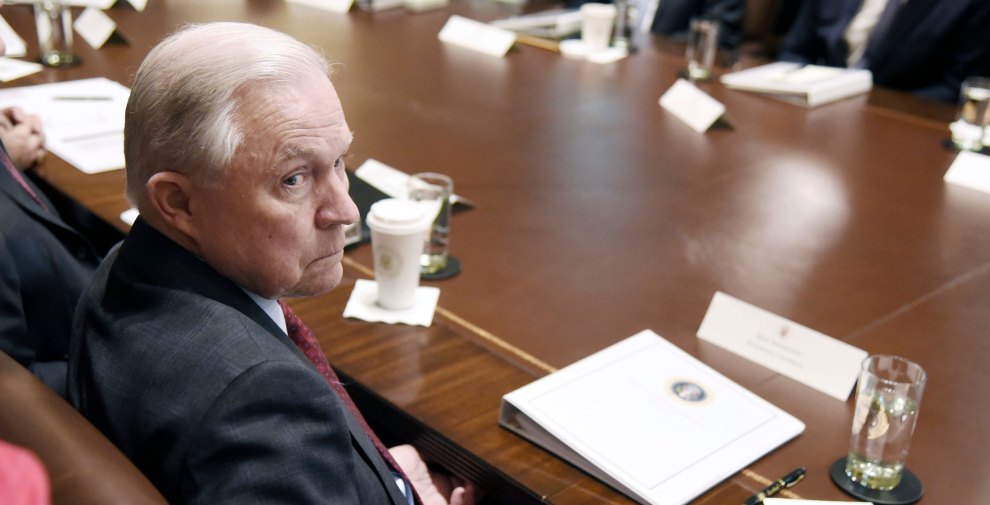 United States Attorney General Jeff Sessions looks on during a cabinet meeting in the Cabinet Room of the White House. Olivier Douliery/picture-alliance/dpa/AP

On Tuesday, Attorney General Jeff Sessions warned that colleges and universities are “coddling” young people instead of encouraging them to engage with different viewpoints. At a high school leadership summit hosted by Turning Point USA, a conservative national student group that promotes free-market principles, Sessions laughed off chants of “lock her up,” and escalated his rhetoric against college free-speech policies, both openly mocking universities and criticizing schools, in stark terms, for creating a “generation of sanctimonious, sensitive, supercilious snowflakes.”

Here are some of Sessions’ prepared remarks:

Through “trigger warnings” about “microaggressions,” cry closets, “safe spaces,” optional exams, therapy goats, and grade inflation, too many schools are coddling our young people and actively preventing them from scrutinizing the validity of their beliefs. That is the exact opposite of what they are supposed to do.

Rather than molding a generation of mature and well-informed adults, some schools are doing everything they can to create a generation of sanctimonious, sensitive, supercilious snowflakes.

If these remarks sound familiar, it’s because Sessions and his Justice Department colleagues have spoken often on how they feel colleges and universities are falling short when it comes to free speech on campuses, including those that protest conservative, and at times far-right, voices. At a speech at Georgetown University last September, Sessions warned that campuses have become “an echo chamber of political correctness and homogeneous thought, a shelter for fragile egos.” In January, his principal deputy attorney general, Jesse Panuccio, suggested that colleges should punish students who protest speakers, telling a crowd at Northwestern University, “If schools would impose serious consequences on those who shut down events and engage in violence, it is likely such tactics would abate.”

Notably, Sessions told the crowd of high school students Tuesday that the Justice Department would continue to intervene in legal challenges against university free-speech policies. Since September, the agency has filed “statements of interest” in four lawsuits against colleges and universities brought by students challenging free speech policies, including a case at the University of California-Berkeley regarding policies adopted after the high-profile protests against conservative speakers that embroiled the campus last year.

Most recently, in June, the department filed a brief in a case against the University of Michigan alleging that the university’s policies governing bias and harassment had a “profound chilling effect on protected expression.” The federal lawsuit, filed in May by the nonprofit Speech First, which advocates free-speech rights on campuses, argued that the definitions for harassment were too broad and that the university’s “bias response team,” a group of officials that investigate reports of bias on campus, posed a “grave threat to free expression.” The group’s complaint claimed the university’s policies had prevented three anonymous students from speaking openly about their views. In their court filing, Justice Department attorneys argued the university “imposes a system of arbitrary censorship of, and punishment for, constitutionally protected speech.”

The same day Justice Department attorneys filed the June brief, Michigan officials announced the university had narrowed the definitions for bullying and harassment. University spokesman Rick Fitzgerald told NBC News that month that the lawsuit “misstated University of Michigan policy and painted a false portrait of speech on our campus.” If Sessions follows through on his remarks today, the department’s intrusion on the free-speech case at the University of Michigan will not be the last.