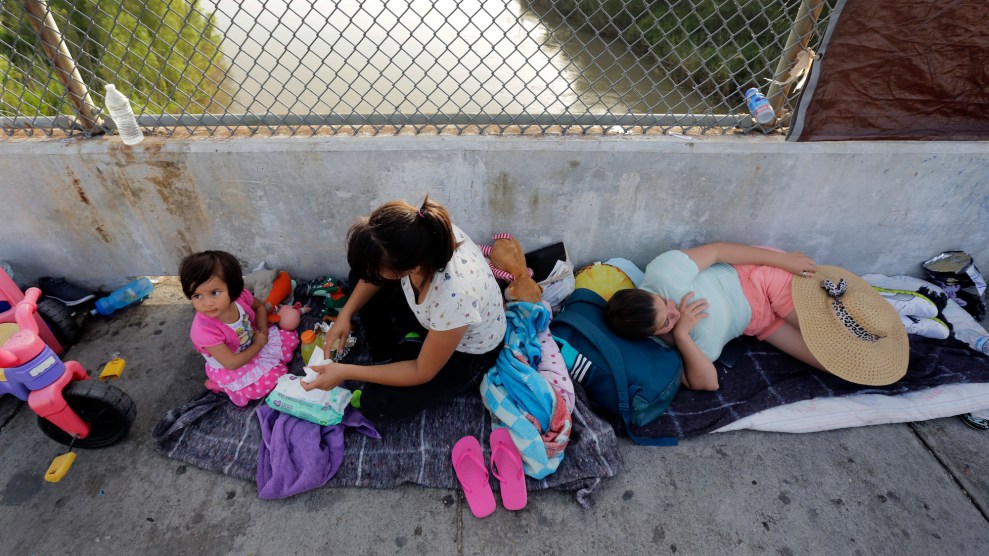 Migrants from Cuba and Guatemala seeking asylum in the United States wait on a bridge in Matamoros, Mexico, in June before being allowed to cross the border by US officials.Eric Gay/AP

On June 26, Texas immigration attorney Ruby L. Powers met with 11 separated parents over the course of an intense day at the Port Isabel detention center in South Texas. Among them was a mother from Central America who recounted how her husband drank heavily, grew violent, and sustained multiple affairs. When she went to court against her husband, a judge said putting up with the abuse was part of her duty as a woman. After fleeing the country and seeking asylum at the border, US officials separated her from her 12-year-old child.

Powers wasn’t sure what would happen next. On June 11, Attorney General Jeff Sessions had used his broad authority over the immigration court system to decide that domestic and gang violence will no longer be grounds for asylum in most cases. One month later, US Citizenship and Immigration Services (USCIS), a division of the Department of Homeland Security, told its asylum officers that, “in general,” domestic abuse and gang violence would not even establish the “credible fear” of persecution that allows asylum-seekers to make their case before a judge.

“This is about individual people and individual families being sent back to face grave dangers without even being given a chance to get a lawyer.”

Government data on the impact of the change is not yet available, but interviews with lawyers across the country suggest that the new standards are leading to more asylum-seekers’ cases being rejected during the credible fear interviews that determine whether someone can move forward with an asylum claim. Carlos García, a South Texas immigration lawyer who has been working with separated parents at Port Isabel, has seen an “overwhelming” number of credible fear denials since Sessions’ decision, known as Matter of A-B-. “It’s devastating,” García says.

Immigrant advocates warn that the denials will lead to countless asylum-seekers being deported and potentially killed in the countries they fled. “Numbers are one thing,” says Eleanor Acer, the director of the refugee protection program at Human Rights First, “but this is about individual people and individual families being sent back to face grave dangers without even being given a chance to get a lawyer.”

But the denials have received less attention than the ongoing family reunifications ordered by federal judge Dana Sabraw. “We wanted to see these good stories of parents getting back together with their kids,” García says. “But the real story, for me, was all of the people that keep getting denied after having their credible fear interview.”

Powers compared her experience with the mother from Central America at Port Isabel to a case where she helped a domestic abuse survivor win asylum before Matter of A-B-. “If you would have been here a few weeks ago, you would have had a strong case,” Powers remembers saying at the detention center. “But now we’re going to have to fight really hard to find a way to meet the requirements for asylum.”

“I just thought, what a horrible thing to say to a person,” Powers says before adding, “She still suffered the same thing my other client suffered, but now it’s not going to be the same. It’s going to be an uphill battle.”

After migrants cross the US-Mexico border or arrive at official ports of entry seeking asylum, they must pass a credible fear interview with a USCIS asylum officer that establishes whether they have a “significant possibility” of being persecuted based on characteristics such as religion or membership in a “particular social group.” (Sessions’ decision overturned a 2014 ruling by the Justice Department’s Board of Immigration Appeals that held that women who were unable to leave relationships could form a social group.) The interviews last about an hour and can be conducted in person or over the phone. Most asylum-seekers go through them without legal counsel and before they’ve had time to gather documents to support their case.

In light of that, Congress intentionally set a low bar for passing the initial interview and about three-quarters of those interviewed are granted a credible fear designation. Those who USCIS says do not possess a credible fear can appeal the ruling to an immigration judge and can be deported within days if that fails. People who pass credible fear interviews may be released from detention and are allowed to present their asylum claim in immigration court, where roughly half are granted protection. That process can take months, or even years, due to a more than 700,000 case backlog in immigration courts.

García says that credible fear denials appeared to shoot “through the roof” at Port Isabel after Sessions issued Matter of A-B-. Among the roughly 75 women housed in one section of the detention center, he said only eight had received positive credible fear decisions by mid-July. “There’s a couple that haven’t gotten their credible fear interview yet,” he adds. “But that’s a huge number of denials.”

“We wanted to see these good stories of parents getting back together with their kids,” García says. “But the real story, for me, was all off the people that keep getting denied after having their credible fear interview.”

There has also been an increase of credible fear denials at the Dilley, Texas, family detention center, the up-to-2,400-person facility that holds the majority of migrant families detained in the United States. Katy Murdza, the advocacy coordinator for the Dilley Pro Bono Project, says only 31 clients received negative credible fear decisions from asylum officers in the first five months of 2018 combined. Thirty-two were denied in the one month after Sessions’ decision—a fivefold increase. The overall denial rate in Dilley went from about 0.5 percent to 2.8 percent.

Shalyn Fluharty, the managing attorney at the Dilley Pro Bono Project, told reporters it is clear that some immigration judges are interpreting Matter of A-B- extremely broadly: “We’ve had immigration judges tell us in court that after Matter of A-B-, no asylum case can be granted using the protected ground of particular social group at all.” That’s impacted women fleeing domestic violence, as well as others with “very different fact patterns of violence.” She said her organization was still waiting to see what the full impact of the changes would be.

Whitney Drake, a staff attorney at the Texas legal aid group American Gateways, says more women are failing to pass credible fear interviews at the T. Don Hutto detention center near Austin. She explains that they’re being denied and that asylum officers are checking a box that reads “No Nexus.” The designation means that they did not establish that they were persecuted based on a protected ground such as membership in a social group.

When people do pass credible fear interviews after fleeing domestic and gang violence, they may now be more likely to be denied bond. Tim Warden-Hertz, a directing attorney at the Northwest Immigrant Rights Project in Washington state, cited the case of Blanca Orantes-Lopez, a mother who fled gang violence in El Salvador before being separated from her eight-year-old-son. After passing her credible fear interview, a judge denied bond on the grounds that Sessions’ decision meant she was no longer eligible for asylum. Warden-Hertz says the judge considered her a flight risk.

As Vox’s Dara Lind has explained, the best news for migrants may be that many asylum officers oppose the Trump administration’s crackdown. Sessions’ decision and the USCIS guidance raise the bar for gaining asylum, but they do not categorically ban people fleeing gang and domestic violence from receiving it. Asylum officers are well aware that denying credible fear can be a death sentence.  “No one,” one asylum officer told Vox, “wants that on their conscience.”

On Wednesday afternoon, the House appropriations committee passed an amendment that would block DHS funding from being used to implement Sessions’ decision. In a rare show of bipartisanship, Rep. Kevin Yoder (R-Kansas) backed the measure. “As the son of a social worker,” he said, “I have great compassion for those victims of domestic violence anywhere, especially as it concerns those nations that turn a blind eye to the crimes of domestic violence.” But to become law, the amendment would still need to pass the full House, as well as the Senate.

Like so many of the Trump administration’s recent immigration policies, Sessions’ decision could end up being blocked or limited by federal courts. Eunice Lee, the co-legal director at the Center for Gender and Refugee Studies at the University of California-Hastings, says Sessions’ decision was filled with legal errors and that her organization is considering all possible legal challenges. But she warns that the USCIS guidance will lead to many asylum-seekers being wrongly deported before judges have weighed in.

That is particularly concerning in the cases of separated parents. Fluharty, at the Dilley Pro Bono Project, said the trauma of family separations “created such a significant duress” that separated parents were “incapacitated and unable to put forth their claims for asylum.” She added, “It really seems like a proper analogy would be running a sprint with a broken leg.” In June, Port Isabel immigration judge Morris Onyewuchi stopped his review of a negative credible fear decision due to the “severe emotional disturbance” caused by the government taking the woman’s nine-year-old-daughter. “Meaningful review is not possible,” he wrote.

Last week, Powers learned that the mother she met with at Port Isabel was being released and would soon reunite with her child. But she had also been denied credible fear and it is unclear how long she may be able to stay in the United States. Powers thinks there’s still a chance of succeeding. “A lot of us are hopeful that Matter of A-B- will be struck down,” she says. “But the issue is that we have to keep fighting and keep cases going before we get that type of result.”

“It could take a while,” Powers continued. “And people can get deported while that’s pending.”