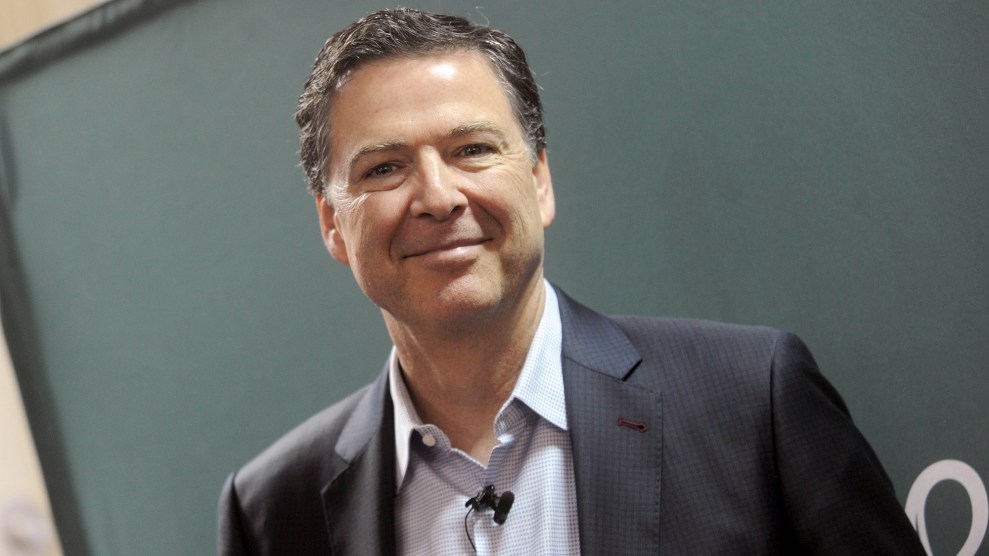 Former FBI Director James Comey made a guest appearance on “Wait Wait… Don’t Tell Me!” Thursday evening at a live taping outside Washington, DC. He took a quiz about loyalty rewards programs on the National Public Radio game show.

The theme of the quiz was derived from Comey’s recent book, A Higher Loyalty, and was peppered with references to Comey’s conduct as FBI director, including his handling of the Hillary Clinton email investigation.

But before the game, Comey shared a story from his law school days. Back then, classmates with whom he played basketball assumed he had also played college basketball because of his 6’8″ height. Tired of correcting them, Comey began to respond to their assumption with an affirmative nod. But after law school, Comey felt guilty about the lie and wrote his friends letters to correct the record. This anecdote gave host Peter Sagal an opening for taking a shot: “I think I might be the first person to ever say this to you, but Jim Comey, couldn’t you have just kept your mouth shut?”

“I might be the first person to ever say this to you, but Jim Comey, couldn’t you have just kept your mouth shut?”

During the quiz portion of the segment, Comey had to answer questions about loyalty rewards programs. He got one out of three correct—only guessing the final question after a hint prompted him to change his answer. “I meant to say I wouldn’t take A,” Comey corrected himself, drawing laughs from the audience. The correction was a jab at President Trump, who recently shocked the world by saying at a press conference with Russian President Vladimir Putin: “I don’t see any reason why it would be [Russia]” that interfered in the 2016 election. Only revising his story after bipartisan attacks, Trump read a statement during an awkward press conference in which he said that he had meant to say, “I don’t see any reason why it wouldn’t be [Russia].”

Sagal continued to tease Comey about his handling of the Clinton investigation in the fall of 2016. After the quiz ended, Sagal made a surprising announcement.

“Wait a minute, we have decided to reopen this game,” he said. “It just so happens that another question has come to light.” Then he added, “So, since we’ve reopened the game at this late date, we’re going to ask you this question, even if it might change the result.”

The joke, of course, is a play on Comey’s own decision to re-open the Clinton investigation in the weeks before the election and share that information with Congress and the public, a controversial decision that may well have changed the outcome of the 2016 election.

“I just want you to know, I feel a little bad about that one,” Sagal added in reference to the touchy subject of whether Comey threw the election to Trump. But Comey was a good sport. “I would have gone there if I were you,” he replied.

Listen to the segment here.