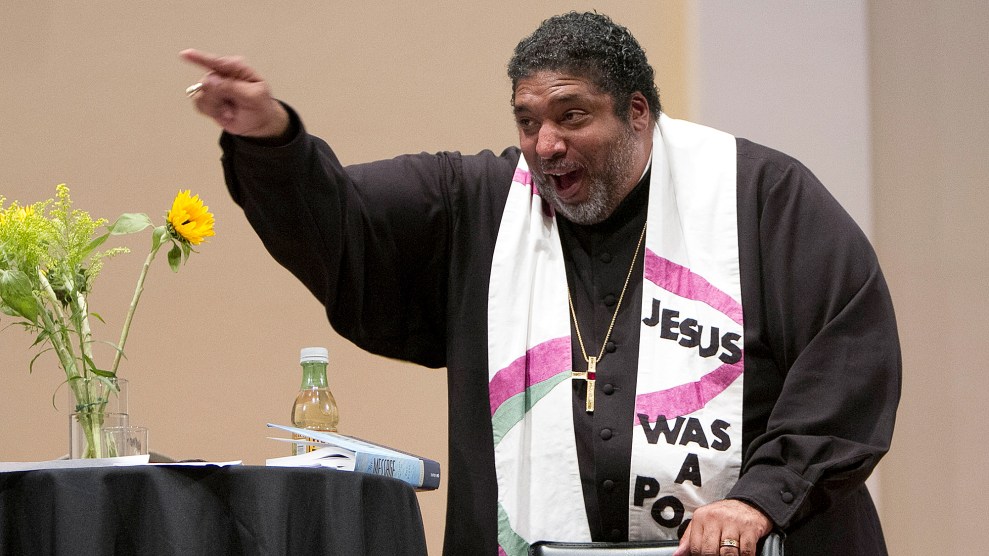 The Rev. William Barber II was born just two days after the historic March on Washington, and he went on to become one of the most prominent civil rights leaders in the South. Now, 50 years after Martin Luther King Jr.’s first Poor People’s Campaign, Barber is reviving the movement for 2018 and calling attention to systemic racism, poverty, and injustice.

“This is not a commemoration,” says Barber. “This is a call to action.”

On the Mother Jones podcast, join us for a fiery conversation with Barber, where we delve into how his movement has built a progressive coalition in the South, how to stand up against inequality and voter suppression, and why the fight isn’t just about President Donald Trump. “There comes a time when you’ve got to stop mourning and pick yourself up,” says Barber. “I’m tired of what I see happening—and I’m rested and ready to fight.” Barber spoke with senior reporter Ari Berman at a live event last week in Berkeley, California.

We also hear from folks in the audience who tell us about the messages they’re taking home with them—and what they’re inspired to do next. Many in the room were energized to take action immediately, and as one 11-year-old says: “When people ask me what am I going to do when I grow up, I say I want to be an activist. Right now, I feel like I don’t have to start when I’m older. I feel like I can start now.”

Finally, listen to DC bureau chief David Corn decode Trump’s highly controversial meeting with Russian President Vladimir Putin—and why “it was the most stunning moment in US foreign policy history that did not involve an actual war or coup or act of violence.”

Note: The audio of the live conversation has been edited for length and clarity.