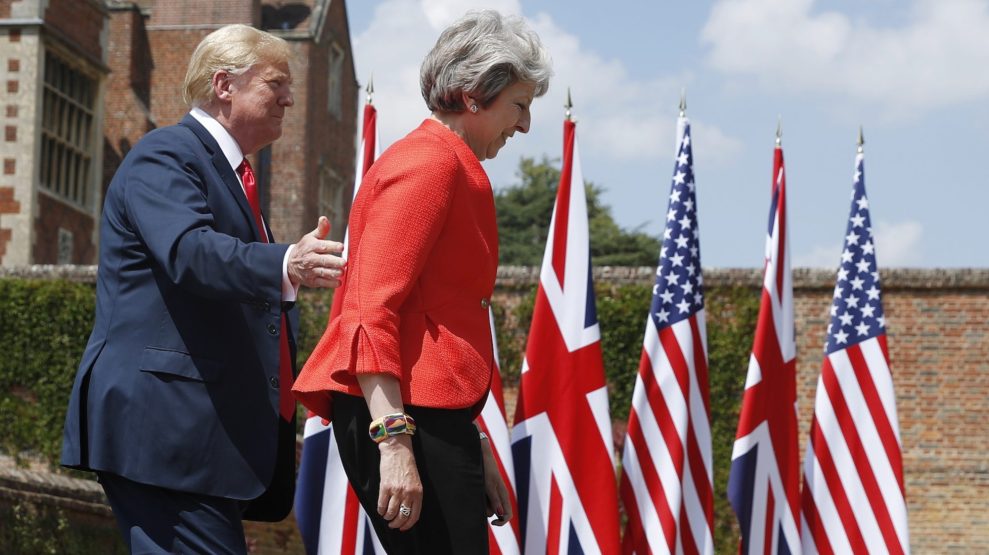 President Donald Trump seems to have spent much of his first official visit to the UK mansplaining to the country’s prime minister, Theresa May.

First came his explosive interview with The Sun, in which he revealed that he’s been helpfully offering May all his business-savvy tips on how she should negotiate with the European Union on the UK’s departure from that international trading body.  Naturally, the woman “didn’t listen to me,” and “she wrecked it,” Trump told The Sun. The interview, in which Trump criticized May’s handling of the delicate Brexit negotiations, prompted a diplomatic crisis which Trump later tried to defuse by dubbing his own interview “fake news.”  (The paper posted the interview audio, rebuking Trump’s claims.)

Later, at a joint press conference Friday, Trump admitted that he’d given May some Brexit negotiating advice that May found too “brutal.” On Sunday, the BBC’s Andrew Marr Show followed up with May, and asked her in an interview for more specifics on the “brutal” advice Trump had given her.

“He told me I should sue the EU. Not go into negotiation, sue them,” May said, looking bemused.

Trump’s negotiating advice to May is in keeping with his own history of suing as a negotiating tactic in his business dealings. His litigation record was detailed extensively in USA Today during the campaign. The paper tallied up more than 3,500 lawsuits Trump or his organizations had been involved in, cases that included everyone from casino patrons to local tax authorities.  The paper writes:

The legal actions provide clues to the leadership style the billionaire businessman would bring to bear as commander in chief. He sometimes responds to even small disputes with overwhelming legal force. He doesn’t hesitate to deploy his wealth and legal firepower against adversaries with limited resources, such as homeowners. He sometimes refuses to pay real estate brokers, lawyers and other vendors.

As he campaigns, Trump often touts his skills as a negotiator. The analysis shows that lawsuits are one of his primary negotiating tools. He turns to litigation to distance himself from failing projects that relied on the Trump brand to secure investments. As USA TODAY previously reported, he also uses the legal system to haggle over his property tax bills. His companies have been involved in more than 100 tax disputes, and the New York State Department of Finance has obtained liens on Trump properties for unpaid tax bills at least three dozen times.

While filing lawsuits against weaker parties might have worked for Trump as a businessman, it’s hard to see how such a strategy might work for May with the powerhouse EU, or even where such a lawsuit might be filed, which might explain the prime minister’s amusement during her TV interview. She told the BBC she would not be taking Trump’s advice for handling the EU. “Actually, no, we’re going into negotiations with them,” she said with a laugh.