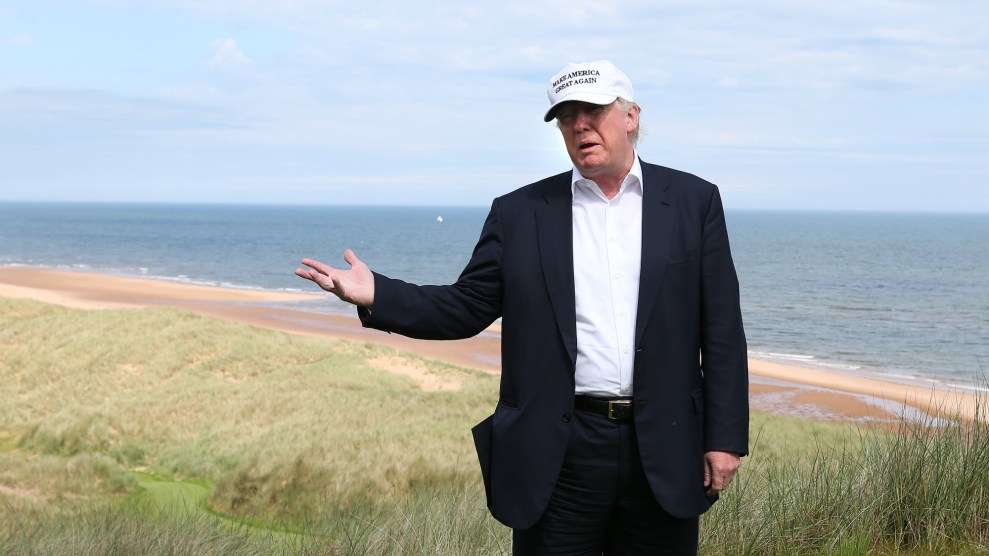 During his trip to the United Kingdom this week, President Donald Trump is expected to squeeze in a golf outing at one of his two Scottish courses, the Trump Turnberry in Ayrshire and Trump International Golf Links in Aberdeenshire. With this side trip, Trump will be promoting his picturesque, seaside properties, which he touted during the 2016 campaign as evidence of his success as an international businessman. And though Trump’s history in Scotland does reveal much about the real estate developer turned commander-in-chief, the story is not a flattering one.

This is a tale marked by acrimonious feuds with locals and repeated run-ins with regulators. Trump even ran afoul of the court that oversees matters related to Scottish heraldry, when he began promoting one of the golf courses using an unregistered Trump family coat of arms. Moreover, his money-losing Scottish ventures have raised questions about his investment acumen and the murkiness of the Trump Organization’s finances.

Trump’s business dealings in Scotland began in 2006, when he paid $16.6 million for a 1,400 acre parcel of land north of Aberdeen, where he completed the first of two proposed golf courses in 2012. In 2014, he bought Turnberry, an existing course located in southwestern Scotland, for $59 million. Trump sank millions more into developing both properties, but according to UK business records, he has consistently lost money on them. As Bloomberg reported, he has poured $200 million into the ventures and has yet to see a dime of profit.

The Aberdeenshire project has been a particular headache for Trump. The local planning board has so far resisted giving him permission to build a large condo and timeshare development on the property because the proposed plan was far more expansive than the one he initially presented. And last year, environmental regulators iced Trump’s plan to build a second golf course at the Aberdeenshire site over potential damage to ecologically sensitive dunes.

During the presidential campaign, Trump cited his business experience in Scotland as evidence that he had what it took to become president. “When I first arrived on the scene in Aberdeen, the people of Scotland were testing me to see just how serious I was—just like the citizens in the United States have done about my race for the White House,” he said. “I had to win them over—I had to convince them that I meant business and that I had their best interests in mind.” What actually transpired has been far different. Trump has skirmished with property owners who have refused to sell their land to his company—he accused one of living “like a pig”—and battled Scottish lawmakers over wind turbines that were erected in view of his coastal property. Meanwhile, the big promises he made when he first pitched his plan for a world-class golf resort in Arberdeenshire have yet to materialize. He initially pledged the development would create as many as 6,000 jobs and spur $1.25 billion in investment; the reality so far has been more like 95 jobs and $50 million.

Far from winning over Scots, Trump has made numerous enemies. His past visits to Scotland have drawn widespread protest. On this trip, Trump again will likely be met with protesters, and UK taxpayers are expected to pay $6.6 million to cover the cost of an additional 5,000 police officers needed to protect him during his weekend jaunt to Scotland, where he has no official events on his schedule. On Friday, ahead of his visit, the Scotsman, the Scottish daily newspaper, ran a full-page editorial denouncing Trump as “an appalling human being.”

Broken promises and headline-grabbing controversies are standard for Trump, but the Scottish deals stand out because of the way he paid for them: all cash.

In the past, Trump has bragged of being the “king of debt” and, like many real estate developers, he usually financed his deals with large bank loans. He entered the Oval Office owing hundreds of millions of dollars to various lenders, including troubled German financial giant Deutsche Bank. But in 2006, with the cash purchase of the Aberdeenshire property, he curiously broke with his debt-heavy pattern. In the years to follow, he made a string of cash purchases that included the acquisition of Turnberry and another golf course he bought in Ireland for $20.2 million in 2014.

These purchases have posed something of a mystery, puzzling even people who have worked closely with Trump over the years and who were aware of his penchant for borrowing heavily to finance his projects. The question: Where was all this cash coming from?

“He had incredible cash flow and built incredible wealth,” Eric Trump told the Washington Post recently when asked about a handful of cash purchases (including the Scottish courses, a Virginia winery, and a pair of Los Angeles mansions) made during the decade before he became president.

But in 2013 Eric Trump reportedly offered a different explanation for the large infusions of cash fueling the Trump Organization’s golf-course-buying spree, telling golf writer James Dodson, when Dodson wondered about the company’s source of funding, that his father had no need to borrow money from banks. “We have pretty much all the money we need from investors in Russia,” Trump’s son said, according to Dodson. (Eric Trump has denied Dodson’s account.) “We’ve got some guys that really, really love golf, and they’re really invested in our programs.”

After playing golf in Scotland this weekend, Trump heads to Helsinki for a controversial summit with Russian President Vladimir Putin, the man who US intelligence agencies have concluded invested in a different Trump venture: helping to put the real estate developer in the White House.