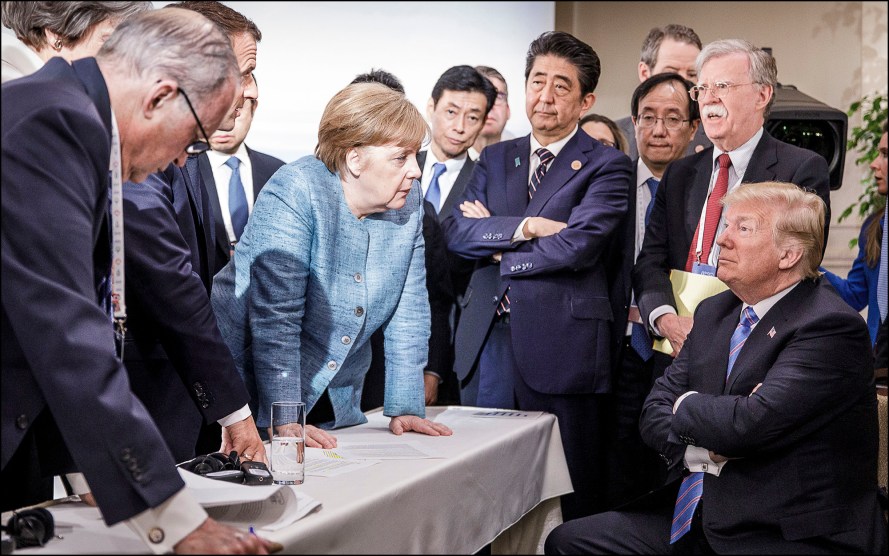 Donald Trump said some stupid things about trade at the G7 today in Quebec City. Dog bites man, am I right? But after this particular dog attack, the man, in the personification of Justin Trudeau, a nice looking fellow from Canada who seems like he’s trying his best, bit ever so gently back.

“Canadians, we’re polite, we’re reasonable, but we also will not be pushed around,” Trudeau said at a news conference.

“I highlighted directly to the president that Canadians did not take it lightly that the United States has moved forward with significant tariffs on our steel and aluminum industry,” Trudeau said at a news conference at the meeting’s end. “Particularly, [they] did not take lightly that it’s for a national security reason that for Canadians . . . who stood shoulder to shoulder with American soldiers in far off lands in conflicts from the First World War onward, it’s kind of insulting.”

Then the dog did what dogs do when their bite victims return the favor: tweet.

Based on Justin’s false statements at his news conference, and the fact that Canada is charging massive Tariffs to our U.S. farmers, workers and companies, I have instructed our U.S. Reps not to endorse the Communique as we look at Tariffs on automobiles flooding the U.S. Market!

PM Justin Trudeau of Canada acted so meek and mild during our @G7 meetings only to give a news conference after I left saying that, “US Tariffs were kind of insulting” and he “will not be pushed around.” Very dishonest & weak. Our Tariffs are in response to his of 270% on dairy!

I don’t know where to go with this dog bites man metaphor but boy isn’t this a crazy world we live in!