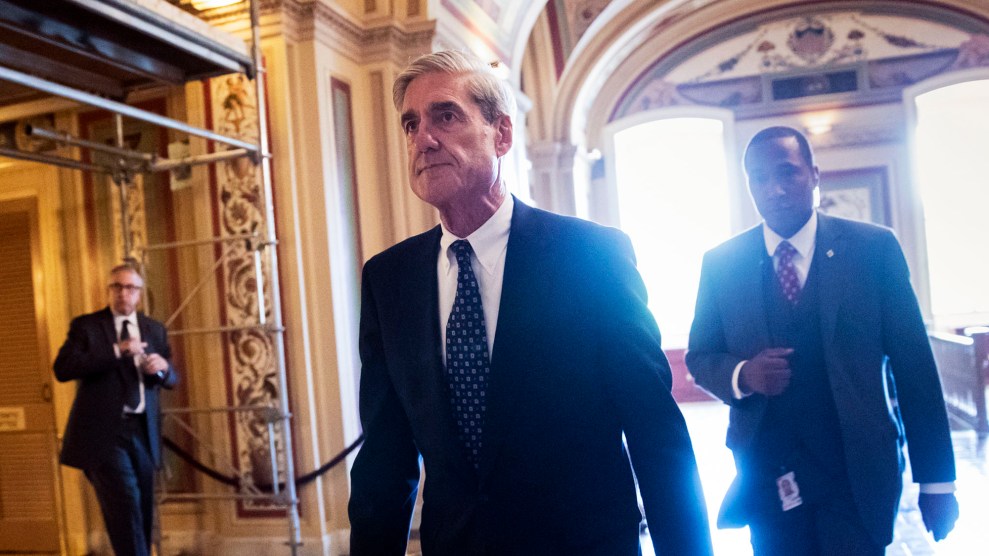 On Thursday afternoon, Rep. Adam Schiff (Calif.), the top Democrat on the House intelligence committee, made a dramatic request: He essentially asked special counsel Robert Mueller to consider whether perjury charges should be brought against witnesses who testified to the committee during its Trump-Russia investigation.

“Mueller should consider whether perjury charges are warranted.”

“These materials may be important to Mr. Mueller’s investigation, and shed additional light on the issues of collusion and obstruction of justice,” Schiff wrote to Nunes. “I also have concerns that certain witnesses may have testified untruthfully before our committee, and believe that Mr. Mueller should consider whether perjury charges are warranted in light of the additional evidence in his possession.”

In the letter, Schiff noted that Rep. Mike Conaway (Texas), who led the Russia investigation for the committee’s Republicans, and other GOPers on the panel had repeatedly promised to make these transcripts public at the end of the inquiry. But, Schiff wrote, they have “abandoned this pledge under the unsupported pretext of protecting the Special Counsel’s investigation.” Schiff reported that he has asked Mueller if he has any objections to the committee releasing the transcripts and that Mueller has none.

“[U]ntil the Majority lives up to its commitment to make the transcripts public,” Schiff wrote, “they must be shared with Special Counsel to assist his investigation and, as appropriate, to allow him to assess whether witnesses violated federal law by providing false testimony.”

Questions have been raised about the accuracy of testimony presented to the committee by such key witnesses as Donald Trump Jr., Erik Prince, and Roger Stone. And Democratic members of the committee have long grumbled that the Republicans in control have declined to follow up on testimony that the Democrats suspect was inaccurate or misleading. They note that the Republicans declined their requests for call-back interviews and for subpoenas of records and documents that could be used to verify or challenge testimony.

In an interview with Mother Jones, Schiff remarked that he had previously asked Nunes to provide specific transcripts to Mueller regarding witnesses who might have testified untruthfully but that Nunes would not commit to sharing this material with Mueller. Schiff also said that Mueller has signaled to the committee an interest in the testimony of particular witnesses. But Schiff noted that he “can’t elaborate” regarding which witnesses and that the committee has not yet received any formal requests from Mueller for transcripts. If Mueller did make such a request, Schiff explained, it would be up to Nunes to decide whether or not to comply.

In the interview, Schiff said that the Democratic members of the committee are conducting legal research to determine whether there are any mechanisms that would allow the Democrats on their own to provide transcripts to Mueller in cases involving possible perjury or obstruction of justice. “If the transcripts contain possible evidence of a crime,” he remarked, “there might be methods to share them with the special counsel.” He criticized the GOP committee majority for reneging on its commitment to make public the transcripts and claimed one reason for this is that the transcripts “reveal how often the majority acted as defense lawyers for the witnesses.”

Schiff pointed to media reports noting that Trump Jr., Prince, and Stone presented testimony that was subsequently undercut by news articles. Asked whether a recent New York Times scoop revealing that Michael Cohen—Donald Trump’s longtime fixer—met in January 2017 with Russian oligarch Viktor Vekselberg called into question the veracity of the private testimony Cohen gave the committee, Schiff said that he cannot discuss specific testimony that has not been made public. But he added, “If the special counsel has evidence that Michael Cohen or other witnesses had meetings with Russians that are inconsistent with their testimony, the special counsel should be made aware of that and consider if perjury charges are in order.”