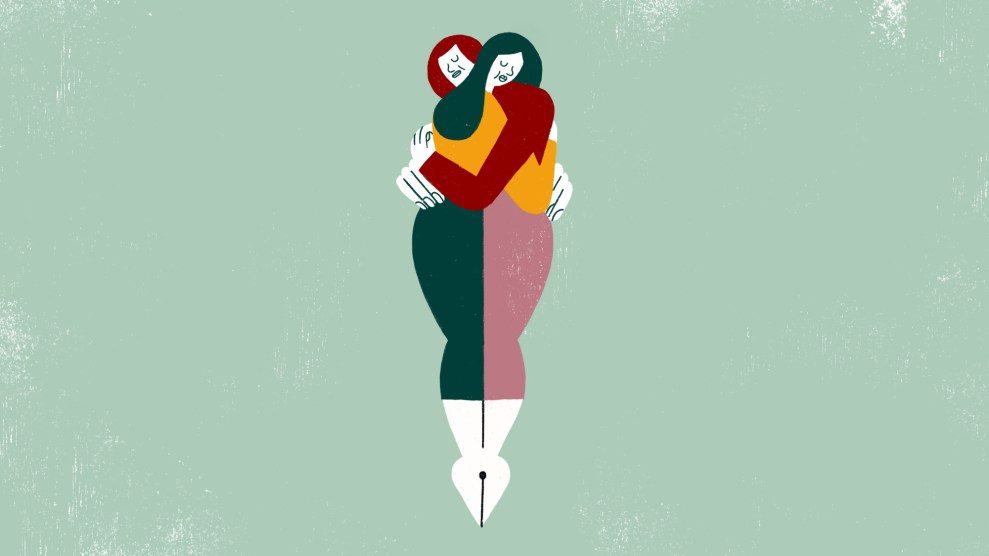 For several years, friends Megan Hessenthaler and Sully Ross lived on a boat in Brooklyn’s Gowanus Canal, played in a punk rock marching band, and joked about having a baby together. They’re queer, so they would crack up thinking about Ross providing the sperm for artificial insemination and taking on the name “Uncle Daddy.”

Then the joke got real. They lost their boat. Hessenthaler got married, and she and her wife, Heather Sommerville, did, in fact, want Ross to help them have a baby. “We had to talk about it like a real thing,” Hessenthaler says.

In recent decades, America has come to look more like Modern Family than Leave It to Beaver. The number of unmarried couples living together increased by 61 percent between 2005 and 2016, and more than half the nation’s kids are no longer raised in households headed by a heterosexual couple in their first marriage. Most of our family law, though, is still written for the Cleavers. The Supreme Court’s 2015 Obergefell decision gave millions of gay couples the right to marry, but it didn’t do much for a single lesbian having kids with her best friend or for sperm donors who want contact with their progeny. The Trump administration’s efforts to undermine Obama-era LGBT protections have put nontraditional families further on alert.

“Default rules can be a lot colder than people realize.”

Which is why Hessenthaler, Sommerville, and Ross decided to sit down and puzzle out the details—visitation, financial responsibilities, what would happen if Hessenthaler miscarried—and codify them in a contract called a “known-donor agreement.”

Martha Ertman, a University of Maryland law professor and the author of Love’s Promises: How Formal and Informal Contracts Shape All Kinds of Families, is the foremost evangelist for setting the terms of less-than-mainstream relationships in writing. A family contract may feel “cold and mean and scary,” she acknowledges, but the “default rules can be a lot colder than people realize.” The legal rights and responsibilities of marriage—spousal inheritance, shared custody of children, etc.—are sufficient for most people, she says, but “Plan B families” need an extra layer of protection. Trump is empowering social conservatives who may be inclined to deny nontraditional families their rights. “If you can whip out a contract that says ‘order of parentage,'” Ertman explains, “that suggests to the person behind the desk, ‘I’m buying myself a huge headache.'”

“Without the contracts, it’s a mess.”

These legal arrangements may turn out to have special currency in the Trump era, but the conversation has been going on for decades. Long before gay marriage became legal, same-sex couples were drafting their own enforceable agreements. In the 1980s, tennis star Martina Navratilova and her girlfriend, Judy Nelson, had a contract that promised Nelson half of the millions that Navratilova earned during their relationship if the couple were to split. In 1992, gay sex was still illegal in Georgia when the state Supreme Court upheld a woman’s written agreement to co-own her home with a female partner.

Sixteen years ago, Ertman decided to have a child with Victor Flatt, a gay male friend. There were details to be worked out before he FedExed his sperm. Ertman borrowed a sample contract from a sociologist and tailored it: She would do most of the parenting, and Flatt would chip in for major expenses like college and spend summers with them. Four years later, Ertman fell in love with Karen Lash. Ertman and Flatt wrote her into their legal agreement, and when the two women tied the knot in 2009, they made their own contract. “Without the contracts, it’s a mess,” Ertman told me.

Some contracts go beyond mere legal provisions to lay out a family’s emotional expectations. Hessenthaler and Sommerville wrote several drafts as they pondered details like how long they would try to get pregnant and what the baby would call Ross. (They settled on “Uncle.”) Ross surprised the women, and himself, when he realized he wanted to be the child’s legal guardian in the case of their deaths.

If you’re going to ask a friend for sperm to make a baby, consider whether he’ll be a donor, or a father figure—and what those two things mean to you.

Unfortunately, these contracts remain a Band-Aid solution. Judges have “a lot of discretion” in deciding what’s in a child’s best interests, New York lawyer Andy Izenson says. There’s a patchwork of laws governing whose name goes on a baby’s birth certificate. In states like Alabama, judges or hospitals could decide that for children of same-sex couples who inseminated at home, the donor is the legal parent. But at least a written document forces people to put their expectations on the table in advance. “It made us think through things,” Hessenthaler told me.

If you’re planning to write a contract with your partner, Ertman recommends pouring a glass of wine and creating a list of what you care about, including columns with what you’re willing to give up and what you want to receive. For instance, how much of your paycheck do you want to deposit into a joint bank account with your partner? If you’re going to ask a friend for sperm to make a baby, consider whether he’ll be a donor, or a father figure—and what those two things mean to you. Then, sit down together and “let the back-and-forth set the stage for this new aspect of your relationship,” Ertman says.

Sure, these contracts can feel clinical—few besides Ertman would call the experience romantic. But romance without the ability to agree on what matters is a lot like living on a boat: awesome when it’s sunny, not so much when the weather gets rough.