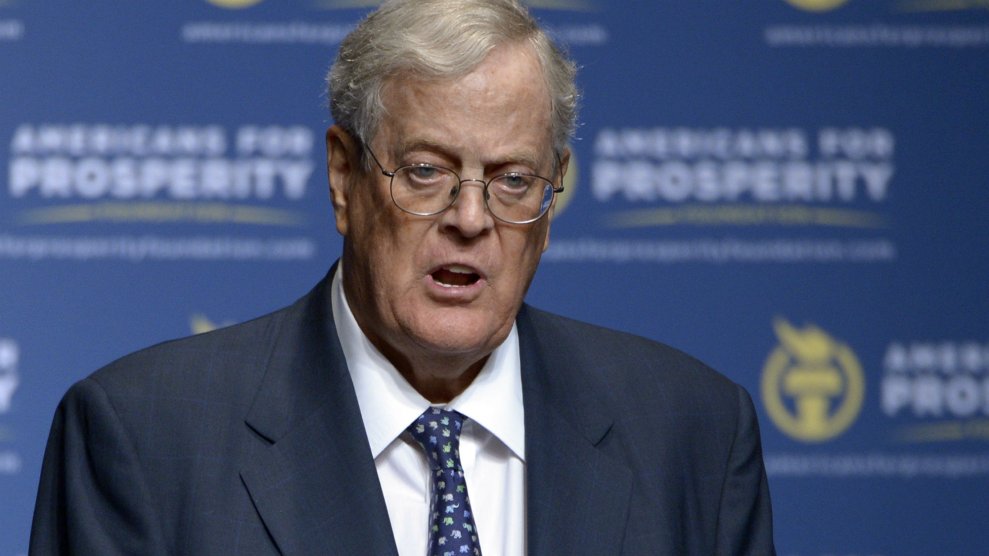 David Koch, one half of the conservative oligarch pair of brothers known for their influential political spending, is apparently retiring from both his businesses and his political organizing. His older brother, Charles Koch, announced the news in a letter to Koch Industries employees on Tuesday, according to several news outlets that obtained copies of the letter. David Koch was diagnosed with prostate cancer in the 1990s and was hospitalized last summer, and his health has continued to deteriorate, Charles Koch wrote to employees.

The brothers each own 42 percent of Koch Industries, one of the nation’s largest industrial conglomerates, which grew out of their father’s oil and gas business to include a sprawling range of businesses, include paper and glass manufacturing. But for all their success as industrialists—and the two men are estimated to be worth as much as $60 billion apiece—they are perhaps best known for their network of conservative political causes. The brothers have given hundreds of millions of dollars—and convinced other wealthy conservatives to contribute even more—to support think tanks, politically active dark money groups, and academic research, all carefully designed to foster ideological support for conservative and libertarian ideas.

During the Obama administration, the Kochs financed groups like Americans for Prosperity, which staunchly opposed nearly all of the president’s efforts. By helping create a widespread grassroots-level anti-Obamacare opposition, and by financing efforts like a GOP-aligned voter database, the Kochs created a virtual shadow party within the Republican Party. That effort seemed to flop as Donald Trump stormed to the helm of the GOP, but the Kochs have gradually developed a rapport with the current president. Just this week, however, the network announced plans to oppose Trump’s planned tarrifs.

David Koch is the most directly political of the pair, having actually run for office himself: In 1980, he ran for vice president on the Libertarian Party ticket, self-financing most of the campaign. The cause of his recent medical issues is not clear, but he didn’t show up at the most recent donor summit the Koch network organized.