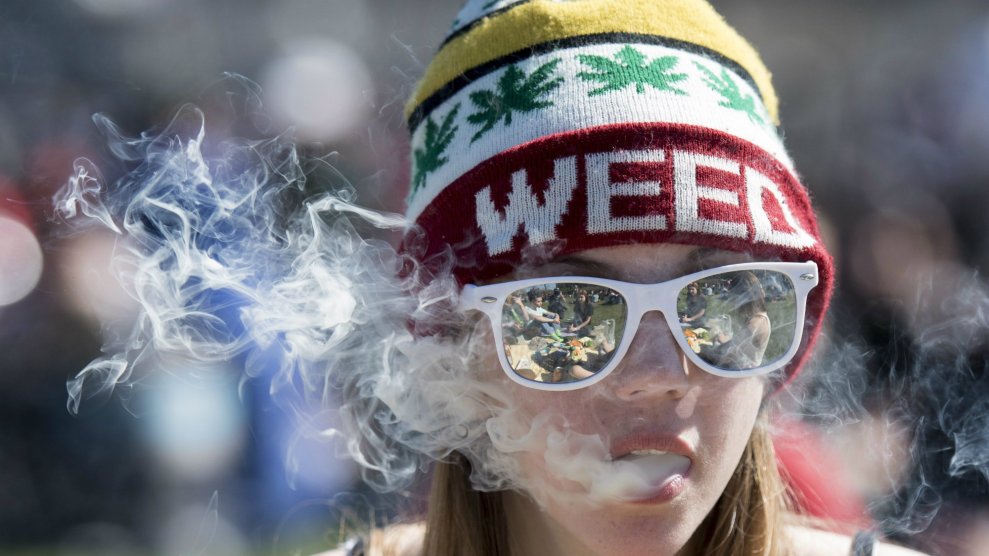 Canada’s senate is set to vote Thursday on a national bill that would legalize the recreational use and sale of marijuana. If the bill passes, it will put our northern neighbor on a path to becoming the first industrialized nation (and first G-7 nation) to regulate pot like alcohol. (Uruguay legalized the recreational use of cannabis in 2013, but has been slow to roll out regulated sales.)

The House of Commons, Canada’s other legislative house, passed a version of the bill in November 2017, and Prime Minister Justin Trudeau, whose administration proposed the legislation last April, has said he will sign it. Even if the vote fails Thursday, the Trudeau administration is aiming to pass a bill in time for legal pot shops to open later this summer. His administration had previously said pot shops would open for business by July, though one of the sponsors of the bill has predicted that it could be more like late August or early September. When they do, this nation of 36 million people will be the world’s second largest legal marijuana market, after California. Canada legalized medical cannabis in 2001.

The bill, called The Cannabis Act, directs Canada’s federal government to license and regulate production, while giving the country’s 10 provinces wide latitude to regulate distribution and sales to adults—sales to minors are banned. Many of the provinces are opting for state-run dispensaries, akin to the way liquor is sold in some US states, such as New Hampshire and Virginia.

I caught up with US Rep. Earl Blumenauer (D-Ore.), co-founder of the Congressional Cannabis Caucus and a leading advocate for federal marijuana reform, to ask what Canadian legalization might mean for cannabis in the states, the prospect of an integrated North American market, and the fate of international agreements that prohibit legalization.

Rep. Earl Blumenauer: It will be an additional incentive to accelerate the conversation here. Canada is sort of like the 51st state. Other than the fact that Donald Trump has declared war on them these days, it’s a neighbor and a huge trading partner. There are tremendous interrelationships socially, economically, and until the Trump administration, globally. So having a huge legal market in a mature, democratic neighbor is going to be a very significant signal to some of the holdouts that we have currently. It’s another step—not toward just legalization but also normalizing it.

MJ: Is this being discussed right now on the Hill?

“If you took a poll now, probably 75 percent of Congress would be unaware of what’s taking place this week in Canada.”

EB: We’re in the time of Trump when there’s a crazy thing happening every day, or two things a day. If you took a poll now, probably 75 percent of Congress would be unaware of what’s taking place this week in Canada. Those of us who are paying attention are looking at it, but we’ve been focusing on what we need to do in the federal appropriations process here to push federal reform in the US. If they, in fact, legalize it, that will raise the profile a little bit. But frankly, what has made the difference to bring some of these people along who have not been with us is what’s been happening at the state level, what’s happened with public attitudes in the United States, what’s happened with the progress we’ve made with veterans having access to medical marijuana. Those are much more meaningful and they have more impact.

MJ: Even if Thursday’s vote fails, the Trudeau administration is aiming to get a bill passed in time for legal pot shops to open later this summer. What will you be watching for as legalization plays out in Canada?

EB: Watching what they do with 36 million people is a lot like watching California. But theirs will be a national program. So, watching how smoothly it takes place. Watching what’s happening with their markets, because there will be clarity under Canadian law that this is a lawful enterprise—[in the States] we still have a cloud of federal uncertainty. There’s also now the prospect, and this is kind of fun, of the western United States and British Columbia, of having a western cannabis market looking towards the potential for interstate commerce and cannabis tourism. There [also] is serious reappraisal of what Mexico’s going to do. Former president [Felipe] Calderon has been very active bringing people together and promoting reform in Canada, and when we get past this presidential election in July in Mexico, if Canada has put its national program into place, the prospect of a North American market is quite exciting.

MJ: That is kind of exciting to consider.

EB: I am absolutely convinced that we’re going to get all of these things aligned here in the next two to four years. Depending on how the midterm elections go, it might be sooner rather than later. I’m working hard to help pro-cannabis candidates in this congressional election. If we get the right lineup, the dominoes will fall very quickly to allow us to make it clear that states are allowed to do what they want, and that the industry will not be discriminated against in terms of financial services or taxation.

MJ: What exactly is happening at the federal level regarding the states?

“What we need is to have the federal government once and for all get out of the way.”

EB: There are over two dozen pieces of legislation being considered. We’re going to be looking through the appropriations process to extend protections [to recreational marijuana businesses in states where it’s legal]. The Rohrabacher-Blumenauer amendment that would prevent the federal government from interfering in state legal medical marijuana—we have amendments dealing with access for veterans to medical marijuana. But what we need is to have the federal government once and for all get out of the way. Do not have artificial constraints on research and on banking, and don’t tax them unfairly. Over 95 percent of the American public already has access to some form of legalized cannabis. Thirty states have legalized medical. We’ve got nine and the District of Columbia that have legalized adult use. We’re going to see votes happening this year in Michigan, Missouri, and Utah. Medical marijuana is no longer an issue—it’s foundational. North of 60 percent of American adults support adult use, and that number continues to grow.

MJ: Would legalization in Canada affect marijuana markets in US states where marijuana is legal?

EB: We’re not even able at this point to sell cannabis across state lines. So legalization in Canada is not going to affect our markets immediately. But it sets up the inevitable development of a North American market.

MJ: Canada’s legalization of marijuana would put it in direct violation of three UN treaties that require signatory nations to suppress drug use within their borders. Do you think Canada will face any consequences?

EB: This stuff dates to an earlier era. There’s not going to be any sanctioning. We’re coming up on a UN global summit on this in 2019 and we’ll be stripping out the weird stuff [in the treaties]. The global prohibition on marijuana is foolish and it is being violated regularly. Harsh, punitive drug policies don’t work. Hence, you’re seeing Portugal going full decriminalization [of all drugs]. Now, there is an institutional bias in favor of global prohibition. The United States has invested billions in this failed war on drugs. I was there in 2016 at the UN special session on drugs and the United States wasn’t among the more-progressive nations who were speaking out in favor of more-enlightened programs. But that’s where the world is going. We’re going to change the policies to make them more realistic.