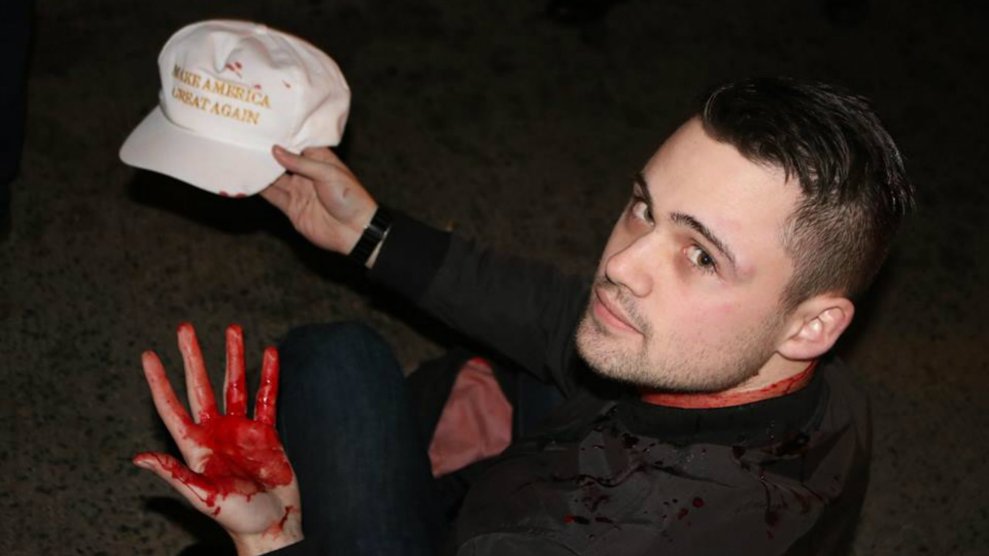 The election of self-described “pro-European nationalist” James Allsup to a Republican Party post in Whitman County, Washington, has sparked local outrage and raised key questions about how party officials can oust troublesome or embarrassing members who legitimately earned their positions.

At issue is whether Allsup can remain a precinct committee officer (PCO), a position weak in power but symbolically important as the first rung on a ladder toward political legitimacy. The job itself is far from glamorous. For just a few hours a week, PCOs assist in handing out flyers, knocking on doors to distribute campaign materials, and voting for local party leaders. But once it became clear that Allsup won the uncontested slot, the local and state Republican brass went out of their way to distance themselves from him.

“His past statements, affiliations and actions are deeply out-of-step with the values of the Republican Party.”

The problem is that few precedents exist for removing PCOs because of their beliefs.

“Historically a lot of weird people have become PCOs,” said Hugh Spitzer, a professor at the University of Washington School of Law, who said he formerly served as a Democratic PCO. “It is hard to dislodge them just for having weird ideas.”

That process may be even harder in an era where conservative ideas such as aggressively deporting migrants—even survivors of domestic abuse—and separating undocumented children from their parents are now policies of the Trump administration.

Allsup is one of those young conservatives eager to leave his mark on a transformed party. During the 2016 election, he built a popular YouTube channel with close to 260,000 subscribers and produced videos with titles like “Triggered Latina DESTROYS Art Project” and “Feminists Are Trying to Ruin Comedy.”

As a recent graduate of Washington State University, where he served as the College Republicans’ chapter president and organized with Students for Trump, Allsup drew national headlines by building a plywood rendition of Trump’s proposed border wall in the center of campus. In his senior year, Allsup resigned as president after footage of him marching at the “Unite the Right” rally in Charlottesville, Virginia, was released. The video depicts Allsup clapping during an appearance by white supremacist Richard Spencer and telling him, “Richard, thank you. Thank you.”

This is James Allsup — speaker at the alt-right rally, Wash State U. College Republicans president, and one of @bakedalaska's racist homies pic.twitter.com/tjDqnHb7YP

Actively participating in a white supremacist rally where a woman was killed might have shattered an ambitious young person’s chances for a political career. But Allsup said he felt vindicated after President Trump’s post-Charlottesville statement in which he tepidly blamed “both sides” for the violence at the “Unite the Right” rally that left one person dead.

“Remember that press conference where he said that there were good people on both sides?” Allsup asked at a conference for Identity Evropa, a group whose former leader believes America is heading toward a “Nazification.” “We were defended by the president of the United States because he knew that our ideas are in fact normal.”

“We were defended by the president of the United States because he knew that our ideas are in fact normal.”

In Whitman County, where Hillary Clinton beat Trump in 2016 by 4.1 percentage points, Republican officials have denounced the ideology Allsup enthusiastically embraces. But it is still unclear how, or even if, they will be able to oust him from a position that carries symbolic power, if not much political authority.

“I have asked the party to not seat him and I understand they are looking into by-laws and legal questions regarding this matter,” Art Swannack, a county commissioner and state Republican committee member, told Mother Jones in an email.

Rep. Cathy McMorris Rodgers, whose district includes Whitman County, said in a statement released on Facebook that she was “disappointed” to hear of Allsup’s election, adding that his “actions and words do not reflect the values of the Republican party or Eastern Washington.”

The state Republican party and Whitman County officials may easily withstand the firestorm created by Allsup’s election once the initial media attention has died down.

Even though Allsup acknowledged in an interview that his new position was “pretty low level,” he has bigger ambitions. As he said in a speech entitled, “Internet to Institutions,” to an audience at the Identity Evropa conference, “We cannot podcast, livestream, or tweet our way to victory. We can only change consciousness so much before we have to start changing the political infrastructure.”

This infiltration begins with filling positions at the lowest level of the political rung, he said, adding, “The Republican Party is comprised largely of white, aging, baby-boomers. And as baby-boomers age out, the positions they hold will become vacant all throughout society and somebody will have to fill them.”