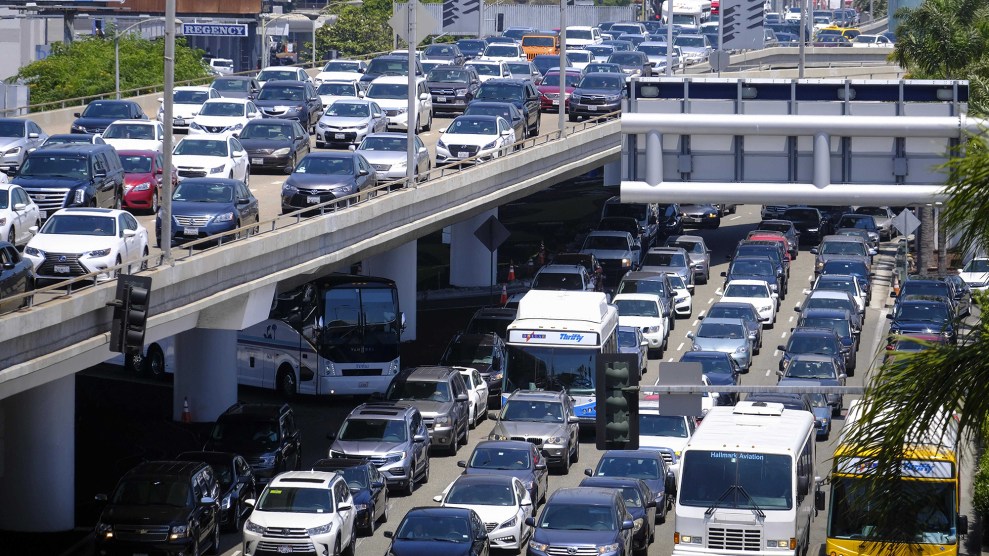 The nearly 40 million drivers who will hit the road this Memorial Day weekend will be paying the highest gas prices since 2014 according to the American Automobile Association. As of April 2018, drivers were paying an average of $2.72 per gallon, up 33 cents from 2017 prices. The reason? A combination of expensive crude oil, record gasoline demand, and a shrinking global supply, the company said.

At least one prominent Democratic senator has blamed President Donald Trump for the price levels. Sen. Ron Wyden (D-Ore.) lays the blame for the increased prices on the president’s tax policies and the decision to unilaterally pull out of the Iran nuclear deal.

“Since Trump has taken the wheel, he’s driven gas prices in one direction—straight up,” Wyden said in a statement issued Thursday before the holiday. “Seven of the largest U.S. oil companies announced $13 billion in stock buybacks after Trump signed his tax bill into law.” He added that Trump’s “reckless decision to break our deal with Iran” has also contributed, by creating “massive uncertainty in oil markets that translates to more pain at the pump for drivers.”

Several others have pointed to Trump’s decision to back out of the Iran deal as at least part of the reason for the higher gas prices, but there are many other factors that Trump has little control over. The Washington Post notes that OPEC, a cartel of middle eastern oil-producing countries, has curtailed oil production for a year ahead of an upcoming initial public offering, a scenario in which higher oil prices mean more valuable stock prices. The Post also notes that Venezuela’s oil production has significantly decreased amidst that country’s political and economic crisis, hitting a three-decade low of 1.6 million barrels per day earlier this year.

Gas prices are largely out of the control of any president even if they serve as a convenient cudgel for political opponents. In 2012, when gas prices climbed under then-President Obama, Trump piled on with the attacks on Obama:

At the time, though, a series of stories assured us that presidents have little to do with gas prices. “Playing The Blame Game On Gas Prices Won’t Solve The Problem,” HuffPost reported. Time explained that in 2012, “gas prices have increased largely because the U.S. economy is doing better, raising demand for gas along with everything else.”

That’s the same argument that some make today.

“A strong economy and growing consumer confidence are giving Americans all the motivation they need to kick off what we expect to be a busy summer travel season with a Memorial Day getaway,” Bill Sutherland, senior vice president, AAA Travel and Publishing, said as the company announced that drivers would be paying the highest prices since 2014.  AAA pointed out that even though gas prices are higher, airfare, rental cars, and hotels will cost less this year than they did last year.

Earlier this week, the Daily Beast reported that Democrats plan to attack Trump on gas prices.

“It’s a summer rite of passage,” a “party operative” told the news outlet. “Only now, for the first time in eight years, we can put it solely on them.”