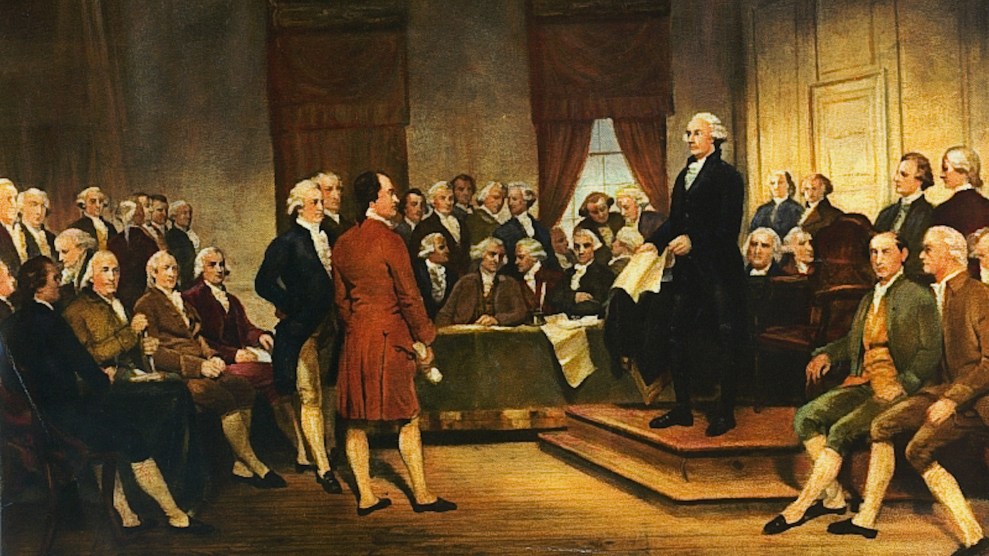 Nature’s rights, universal basic income, keeping money out of politics: These are some of the principles guiding a coalition of left-wing Californians who want to serve as the “progressive voice” at a convention—which they believe is inevitable—to amend the United States Constitution.

Just to refresh your memory, Article V allows for two ways to change the founding document: (1) Congress can propose an amendment with two-thirds approval from both the House and the Senate, or (2) two-thirds of the states—34 of them—can petition Congress to hold a convention at which new constitutional amendments may be proposed and debated. Either way, 38 states have to ratify a proposed amendment before it becomes the real thing.

Clare Hedin, co-founder of the group California Constitutional Convention (a.k.a. Cal Con Con), is confident of a convention in the not-too-distant future. Up to 28 states have already called for one (“up to” because some states’ resolutions are old or disputed), including a dozen states since 2010, according to the Center on Budget and Policy Priorities, a progressive think tank. It’s “well on its way to happening,” Hedin says. A state ballot initiative outlining talking points for a convention, she and her colleagues are convinced, is the most effective way to push their left-wing agenda, which includes:

Cal Con Con has about 5,000 members, Hedin says, but most of its actions only involve the group’s five core leaders, who are scattered around the state from the Bay Area to Santa Barbara and meet weekly via conference call. “That’s modern politics,” she says. Cal Con Con views itself as a coalition, with environmental and progressive groups signed on as “allies.”

To be clear, the state of California has already called for a constitutional convention, back in 2014. Cal Con Con’s goal is to get progressive priorities on the agenda, compelling California delegates at this future convention to take heed of state voters. “It’s going to come down to the legislature hearing the collective call of Californians to protect our values at the highest level,” Hedin says.

As it stands, the initiative, “Cal Con Con 2.0,” is a left-wing fantasy, with guarantees of universal health care, freedom to marry whomever, and the right to be safe from being harmed by people with guns. Corporate free speech and corporate “personhood” would be toast. Industry would be required to adopt “waste free” and “non-polluting” “‘Cradle to Cradle’ design principles.” And patenting living organisms would be outlawed.

Nature comes up often: There’s a full section on “Protecting the Dignity of Life” that, among other things, calls on the federal government to recognize nature as “a freely living being with inalienable rights.” For Hedin, this provision is paramount—and personal. “I really love this planet,” she says. “It’s a feeling of duty and respect to do whatever I can to intelligently bring about a shift in consciousness, a shift in awareness, around our role as humans on this planet.”

Cal Con Con had previously drafted a ballot initiative for this year’s statewide election and was cleared to begin collecting signatures. But the group ended up shelving “Cal Con Con 1.0” in favor of a new version based on input from groups such as the California National Party and Move to Amend. “We realized that the extent of this initiative is in its collaborative nature,” Hedin says. The group plans to file the new version in January so it can start gathering the hundreds of thousands of signatures required to qualify for the November 2020 ballot.

Back in 2014, when California called for a constitutional convention, it became the second state after Vermont to demand that its convention delegates propose an amendment to limit corporate campaign financing—a direct response to the Supreme Court’s 2010 Citizens United ruling, according to SFGate.

But beyond those two states, the convention movement has largely been led by conservative interests. The American Legislative Exchange Council is behind several state resolutions calling for a federal balanced budget amendment. Earlier this year, Missouri and Alabama called for conventions to set term limits in both chambers of Congress.

“Our philosophy was: Teenagers are going to cut loose and throw a house party. We’ll be the responsible adults.”

Convention skeptics like the Center on Budget and Policy Priorities argue that a modern constitutional convention could prove dangerous for citizens’ rights. It “likely would be extremely contentious and highly politicized, and its results impossible to predict,” the think tank warns, and a con con might “set its own agenda,” with no authority governing the delegates. It’s hard to know, given that there hasn’t been a federal constitutional convention since, well, the first one in 1787, which began as a gathering to amend the Articles of Confederation.

Cal Con Con is aware of these arguments, but its leaders figure a convention will probably happen regardless, so progressives had better take it seriously. “The time to stop it was five, 10 years ago,” says Cal Con Con’s Marcus Ruiz Evans, another member of the core leadership team. “The interior 40 states, or the majority controlling the federal government, they’re going to get the votes to make this happen. Our philosophy was: Teenagers are going to cut loose and throw a house party. We’ll be the responsible adults.” (“Some of us might feel that way personally,” Hedin told me, “but I’m not sure it’s the most productive.”)

Evans also happens to be one of the leaders of Yes California, a secessionist organization that recently got the greenlight to collect signatures to put “Calexit” on the ballot. The secession movement, he says, has no bearing on whether the United States should hold a constitutional convention—”even if California does leave America, this is something America needs to do”—although Cal Con Con 2.0 currently calls for the creation of “a clear and reasonable path” for states “to achieve complete independence from the United States.”

As Evans points out, he and his Cal Con Con colleagues are not the only voices on the left calling for a convention. He points to Wolf-PAC, a political organization founded by the Young Turks’ Cenk Uygur, which aims to amend the Constitution to reform campaign finance laws.

Richard Hasen, a professor of law and political science at the University of California-Irvine, has written that “millions of California voters” calling for a constitutional convention could pressure the federal executive and judicial branches to effectively erase the Citizens United ruling. Harvard Law School’s Lawrence Lessig, a prominent con con proponent, made a similar argument in 2014.

Getting power from the collective strength of everyday citizens—beyond moneyed interests, beyond self-interested politicians—is the true dream of Cal Con Con’s organizers, who have grown disillusioned with “a system called voting” and the “thin, old” Constitution of 1787. “It just feels like nothing really changes, and you never get to see if your voice matters, if your voice changes anything,” Hedin says. But with a convention, “people get to design the governing document. That is a sensational experience.”

Our current constitution is 231 years old, however. If the states were to succeed in drafting and ratifying a new document, how long would that one stay relevant?

“If there were a constitutional convention and there were no progressive voices…I think it could be the end of civilization.”

“That’s an interesting question,” Hedin says. “You’ve given me a reason to add something else to the initiative.” She’s referring to potentially encoding future conventions into a new document. In any case, Hedin says she and the others want to get more people involved in submitting ideas and changing the initiative’s language. Clearly, the document is a work in progress: When I ask her whether the term “natural persons” might be used to exclude people born as a result of fertility treatments or those with organs grown from stem cells, she clarifies, “It is meant in contrast to corporations…we simply mean ‘living, breathing, real humans.'”

There are yet other glaring ambiguities to be ironed out: For example, Cal Con Con 2.0 contains a proposal to “render it illegal to terminate life’s ability to renew itself, in perpetuity.” When I point out that this could be interpreted as a ban on abortion, Hedin was aghast. Cal Con Con is pro-choice, she says—so that language will have to change.

But the group persists on this core belief: “You need something radical, the Constitution is the way to do it, and really, the California people should come together to make this happen,” Evans says. “Nobody’s really sure how it’s going to go. Nobody’s really sure what the future holds—but we think we can pull it off. We believe that.”

Hedin and Evans understand their idea is controversial and not everyone will necessarily be on board. But they also believe that when a convention happens, they need to be in a position to secure progressive language in the new document—or else.

“Sort of ‘reasonable-radical’ is how we think of what we’re doing,” Hedin says. “We’re either going to have another civil war—if there were a constitutional convention and there were no progressive voices there and it went the way the Koch brothers want it to, I think that’s the end of freedom. I really do. And because of their thoughts on environmental impact, I think it could be the end of civilization. I really mean that.”