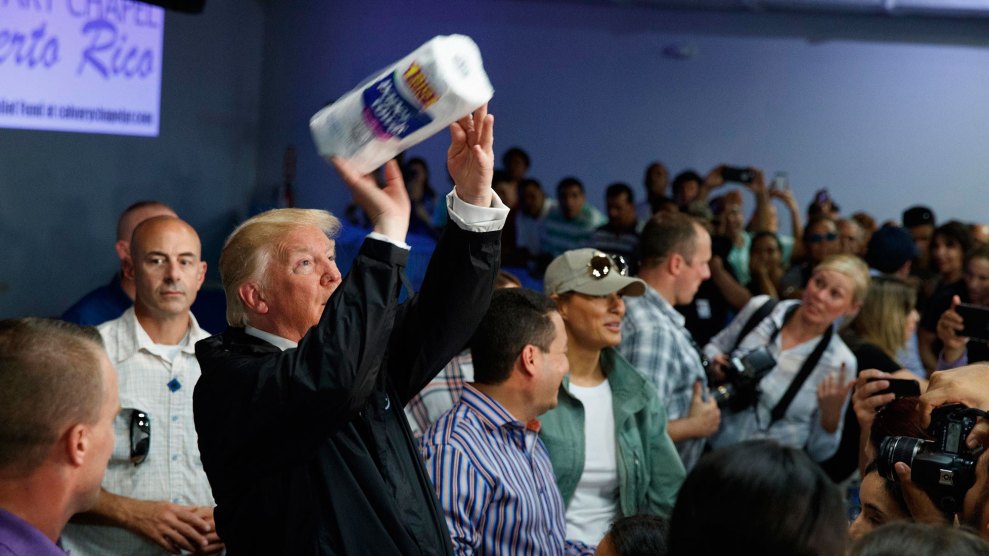 On Tuesday, researchers at Harvard published a new study showing that the death toll from Hurricane Maria was 75 times higher than what the government had previously reported. By that calculation, it was 290 times higher than the 16 fatalities President Donald Trump himself announced during a visit to the island last year, during a bizarre appearance in which he contrasted the devastation in front of him with “a real catastrophe, like Katrina.” (We now know that Maria was more than twice as deadly as Katrina.) With the exception of the 1900 hurricane that wiped out Galveston, Texas, Maria killed more Americans than any other disaster on record, including the Chicago fire and the San Francisco earthquake. It killed more people than the 9/11 terrorist attacks and the attack on Pearl Harbor.

Trump has not commented publicly on the study. In fact, he hasn’t tweeted about Puerto Rico in seven months. But his statements about the island in the immediate aftermath of the storm are worth revisiting in light of the new numbers.

His tweets generally fell into two categories: absolving himself of responsibility for rebuilding, and demanding credit for the response. In the former, Trump frequently referred to the island’s pre-existing economic problems, implying that any complications with the recovery effort wouldn’t be his fault.

…The fact is that Puerto Rico has been destroyed by two hurricanes. Big decisions will have to be made as to the cost of its rebuilding!

The wonderful people of Puerto Rico, with their unmatched spirit, know how bad things were before the H's. I will always be with them!

"Puerto Rico survived the Hurricanes, now a financial crisis looms largely of their own making." says Sharyl Attkisson. A total lack of…..

Texas & Florida are doing great but Puerto Rico, which was already suffering from broken infrastructure & massive debt, is in deep trouble..

“Big decisions will have to made” isn’t exactly subtle, and a subsequent investigation by Politico puts these tweets in a clearer context: In the aftermath of last summer’s storms, the administration treated Texas—which was hammered by Hurricane Harvey—far more favorably than it did Puerto Rico.

But Trump also heaped praise on his own disaster response, even as the death toll in Puerto Rico mounted:

We have done a great job with the almost impossible situation in Puerto Rico. Outside of the Fake News or politically motivated ingrates,…

The Fake News Networks are working overtime in Puerto Rico doing their best to take the spirit away from our soldiers and first R's. Shame!

Despite the Fake News Media in conjunction with the Dems, an amazing job is being done in Puerto Rico. Great people!

To the people of Puerto Rico:
Do not believe the #FakeNews!#PRStrong🇵🇷

Nobody could have done what I’ve done for #PuertoRico with so little appreciation. So much work! pic.twitter.com/k2jAkIpfjI

Thirteen years ago, Hurricane Katrina turned “heckuva job”—a stray comment from President George W. Bush about his FEMA director, Michael Brown—into a generation-defining gaffe. Trump said the same thing about himself, and we’ve hardly talked about it since.