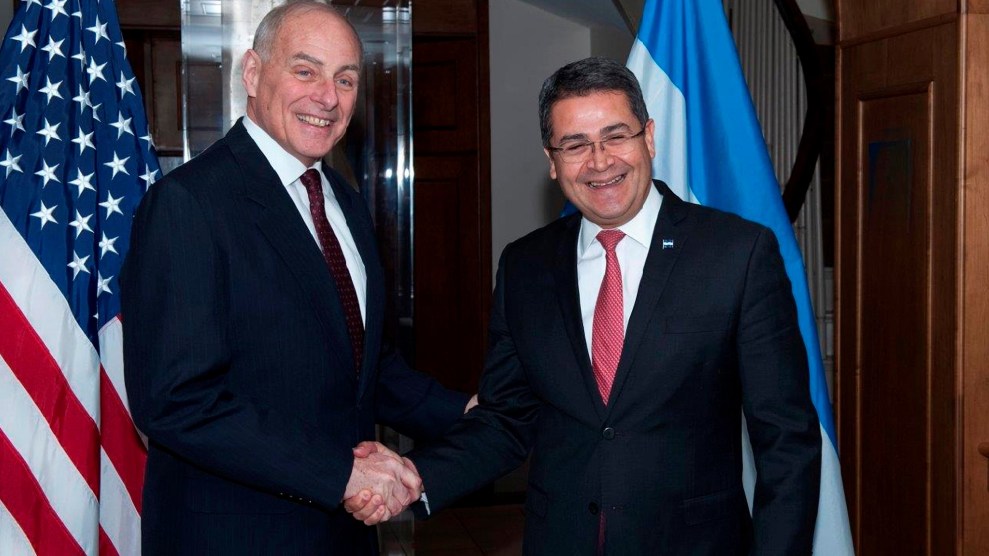 Days after Hondurans arrived at the US-Mexico border as part of a migrant caravan that incurred President Donald Trump’s wrath, the Trump administration is pushing a much larger group of Hondurans toward deportation. Homeland Security Secretary Kirstjen Nielsen announced on Friday that the approximately 57,000 Hondurans who have lived in the United States since at least 1998 will lose their temporary legal residency in January 2020.

Ending Hondurans’ Temporary Protected Status, a reprieve from deportation granted to people whose countries have been devastated by natural and man-made disasters, will cause tens of thousands of Hondurans to face the risk of deportation for the first time in two decades. Those who are deported would return to a country that remains one of the most dangerous in the world.

Honduras received its TPS designation in 1998, in the wake of Hurricane Mitch. That was “no golden age” for Honduras, says Dana Frank, a professor of modern Honduran history at the University of California-Santa Cruz. But “if things were terrible after Mitch…they’re much, much worse now.” Mark Ungar, a professor of political science at Brooklyn College who has advised the Honduran government on security issues, agrees that Hondurans would be returning to a more dangerous country. (Most Honduran TPS holders were already living in the United States illegally or on temporary visas prior to 1998.)

In 2012, amid rampant gang violence, Honduras had the world’s highest murder rate, and Ungar says major cities were like war zones. The country’s official homicide rate has dropped since then, from about 90 to 43 murders per 100,000 people annually. That’s still vastly higher than the rate of 5 per 100,000 in the United States in 2016. And Ungar and Frank say the actual murder rate is likely higher than what the Honduran government is reporting. “You should not believe anything” the government is saying about the decline in the murder rate, says Frank, since there is no independent verification of its claim that the murder rate fell by more than 25 percent last year.

If things were bad when Honduras got its TPS designation, “they’re much, much worse now,” says a professor of Honduran history.

The Trump administration had previously announced that it is ending TPS for more than 250,000 people from El Salvador, Haiti, Nepal, Nicaragua, and Sudan. Honduras and Nicaragua have the oldest existing TPS designations. As of August 2017, nearly two-thirds of Honduran TPS holders had been in the United States for at least 20 years, and they had about 53,000 children who were born in the United States.

Carmen Paz, a Honduran TPS holder, told Mother Jones in January about the chaos that sending people back to Honduras would create. “With all of us there, we’d be eating each other,” Paz said. The next day, her partner, who is Salvadoran, learned that he would lose the TPS he’s had since 2001. The decision gives Salvadorans until September 2019 to leave the United States or find another path to legal residency. Many TPS holders are expected to remain in the United States illegally and risk deportation.

In November, White House chief of staff John Kelly reportedly pressured Elaine Duke, who was then the acting DHS secretary, to end TPS for Honduras. Instead, she declined to make a decision, triggering an automatic six-month extension. DHS stated at the time that the delay was “based on the lack of definitive information regarding conditions on the ground compared with pre-Hurricane Mitch.” Duke also called on Congress to “enact a permanent solution,” but efforts to give TPS holders a path to citizenship have gone nowhere. DHS is now run by Nielsen, Kelly’s intensely loyal former deputy. Nielsen announced last week that DHS is phasing out TPS for about 9,000 Nepalis.

On Friday, Nielsen said in a statement that “the disruption of living conditions in Honduras from Hurricane Mitch that served as the basis for its TPS designation has decreased to a degree that it should no longer be regarded as substantial.” The administration is giving Honduran TPS holders 18 months to prepare to leave the country or seek another path of legal residency before their status terminates on January 5, 2020. Nielsen’s statement made no mention of the violence in Honduras.

Kelly’s support for ending Honduras’ TPS came despite his close relationship with Honduran President Juan Orlando Hernández, who has pushed for TPS to remain in place. Hernández was reelected last year in what was widely believed to be a fraudulent election. Government security forces killed at least 16 people—seven of whom were shot in the head—during protests against Hernández’s reelection, according to the United Nations.

Last month, the Associated Press reported that Kelly, while serving as the head of the US military’s Southern Command, had praised Honduran officials for fighting corruption, despite media and US government reports that linked the country’s security forces to corruption and murder. Ungar says Kelly didn’t seem to absorb what he heard about Honduras in private meetings with human rights groups that they both attended. “He would listen,” Ungar says. “But there was no signal that this would lead to some kind of reassessment. It felt perfunctory.”

Ungar acknowledges that the “original justification” for TPS may be over but stresses that new conditions have replaced it. The most obvious evidence is the fact that the vast majority of people in the migrant caravan are from Honduras. Many are now seeking asylum in the United States, citing domestic abuse and widespread gang violence, as others camp outside the border crossing in San Diego while waiting to do the same.

But extending TPS for Honduras would not have fit with Trump’s broader push to sharply cut the number of immigrants in the United States. Kelly appeared to make that clear to Duke in November, when he argued against kicking the Honduras TPS decision “down the road,” a White House official told the Washington Post. Further delay, Kelly reportedly said, “prevents our wider strategic goal” on immigration.

This story has been updated to reflect the Nielsen’s announcement.