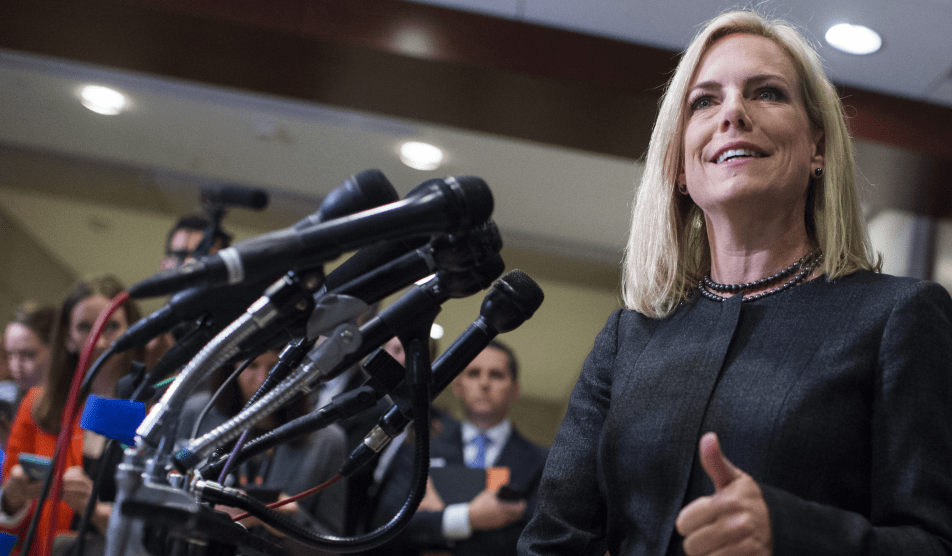 In January 2017, US intelligence officials at the CIA, the FBI, and the National Security Agency definitively concluded that Russian President Vladimir Putin “developed a clear preference” for then-2016 presidential candidate Donald Trump and coordinated a high-level campaign aimed at discrediting his opponent, Hillary Clinton.

The assessment was also backed by the Senate Intelligence Committee and special counsel Robert Mueller.

Despite the well-publicized and unambiguous assessment, Department of Homeland Security Secretary Kirstjen Nielsen on Tuesday told a group of reporters, “I don’t believe I have seen that conclusion.”

“That the specific intent was to help President Trump win—I’m not aware of that,” Nielsen continued. “But I do generally have no reason to doubt any intelligence assessment.” She later attempted to clarify the statement, adding that Russian interference affected “both sides.”

DHS Sec. Nielsen says she's "not aware" of intelligence community assessment that Russia meddled in 2016 election with specific intent to help Donald Trump win, "but I do generally have no reason to doubt any intelligence assessment." https://t.co/uUo98JTEQ8 pic.twitter.com/1xzkjXIfJB

Nielsen’s remarks, which come amid her reported tensions with Trump over immigration, sparked instant condemnation. Shortly after the comment surfaced on social media, vice chair of the Senate Intelligence Committee Sen. Mark Warner (D-Va.) sent an email to reporters with several links to the intelligence community’s findings. The subject line of the email read, “I honestly can’t believe I have to keep doing this.”

In recent days, Trump has taken new steps to undermine the ongoing Russia investigations. His anger with the special counsel’s probe hit a new level on Sunday, when he announced his intention to order the Justice Department to look into his claim that the FBI may have illegally spied on his campaign for political purposes.  (The president’s narrative appears to misrepresent reports that an FBI informant made contact with Trump associates to look into the growing concerns regarding foreign influence in the American election.) Deputy Attorney General Rod Rosenstein announced Tuesday that the Justice Department would investigate Trump’s latest conspiracy theory.