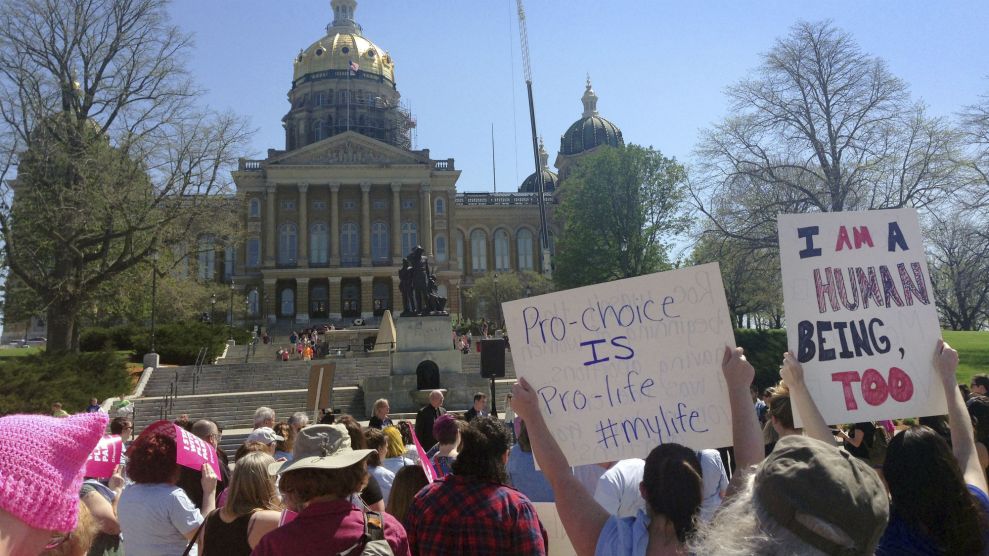 A lawsuit filed Tuesday by Planned Parenthood and the ACLU of Iowa seeks to block Iowa’s recently-passed “heartbeat” abortion law, one of the most restrictive abortion laws in the country.

The law, set to go into effect July 1, bans abortion once a fetal heartbeat is detected, generally about six weeks into a pregnancy—before some women know they’re pregnant. The “heartbeat” bill passed the Iowa House and Senate earlier this month and was signed by Iowa Gov. Kim Reynolds soon after.

In a statement, Planned Parenthood called the law “blatantly unconstitutional” and “extremely harmful to women.” The statement says that the lawsuit, filed in Iowa state court on behalf of plaintiffs Planned Parenthood of the Heartland, Dr. Jill Meadows, and The Emma Goldman Clinic of Iowa City, will invoke the authority of Roe v. Wade, which “guaranteed a woman’s constitutional right to access safe, legal abortion” 45 years ago.

“Today, we’re fighting back in court for every person’s individual rights and freedoms, which go to the heart of who we are as a country,” said Planned Parenthood Vice President Dawn Laguens, in a statement Tuesday. “This dangerous law decimates a woman’s right to control her life at the most basic level, including whether and when to become a parent.”

On the day Reynolds signed the bill, she said she anticipated it would “likely be challenged in court, and that courts may even put a hold on the law until it reaches the Supreme Court.” Despite the legal challenges, she said, “This is about life; I am not going to back down from who I am or what I believe in.” Some Iowa Republicans have gone even further, saying they hoped the law would be challenged as a route toward a Supreme Court case that could overturn Roe v. Wade.

“Today we will begin this journey as Iowa becomes ground zero nationally for the life movement and the starting line back to the Supreme Court,” said Sen. Rick Bertrand (R-Sioux City) during a floor debate over the “heartbeat” bill earlier this month. “I believe this bill will be the vehicle that will ultimately provide change and provide the opportunity to overturn Roe v. Wade.”

Similar lawsuits are underway in Mississippi, which passed a ban on abortion after 15 weeks, and Kentucky, which banned abortions after 11 weeks.