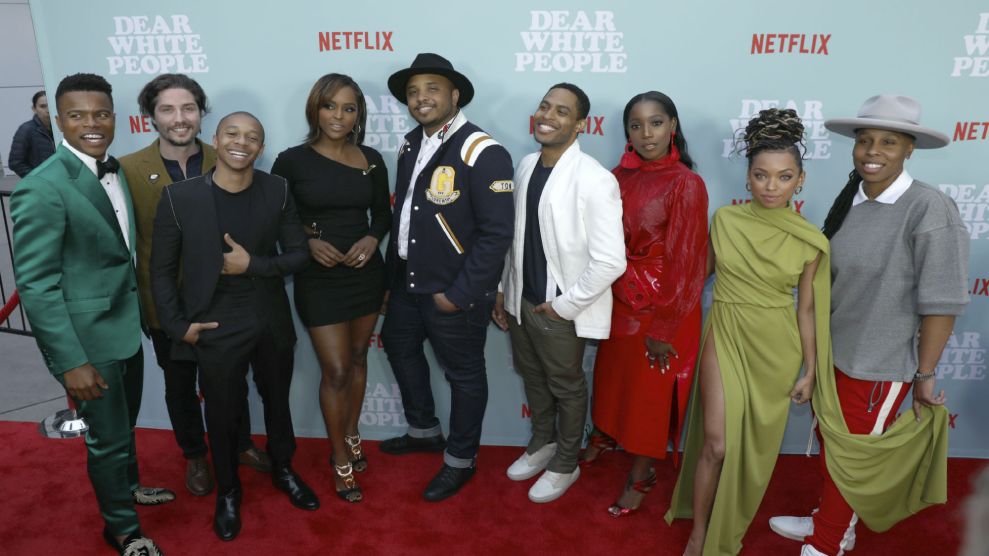 It took me a while to watch Dear White People, mostly because I lived it.

I was a freshman in college in the spring of 2004 when a series of high-profile racially motivated events swept across campus. I went to a small liberal arts school tucked away on a tiny patch of Southern California desert. The beach was an hour’s drive west, the San Gabriel Mountains a half-hour’s drive east, so in even the dead of winter, as snow fell not all that far away, the sunny, 80-degree weather made the whole thing feel more like summer camp than it should have been.

It started in January, when an 11-foot-tall cross that had been part of a student art project was stolen and dragged from one end of campus to another, then burned. In February, a fake fraternity—real ones were officially banned on campus—sent hopefuls on a scavenger hunt to “take a picture with 10 Asians.” Later that month, the word “nigger” was scrawled across a calendar featuring an image of George Washington Carver, the famed African American inventor. A lesbian couple reported being called “some fucking dykes” as they crossed a main campus road.

Then, later in March, a Jewish professor who had been an ally of marginalized students on campus, most of whom had grown more frightened as the semester’s events dragged on, walked out of class one day and found her car vandalized—hateful messages calling her a “nigger lover” and “kike” were scrawled on the side, her windows bashed in, tires slashed, and a partially drawn swastika on the roof.

These racist acts seemed so antiquated that they bordered on absurd. Like they didn’t care enough about us to even try to get creative.

As I stood with a group of hastily gathered students in the parking lot, looking at the battered car shortly after it was discovered, I remember feeling exhausted by the spectacle. There’s a collective weight that students of color carry onto predominately white campuses. It’s profoundly symbolic to gain access to any institution that’s long been out of reach for people like you, to gain a seat at the table. You look around at the incredible feast laid out before you. There are too many forks and more courses than you thought possible, but that’s fine. The conversation taking place at the table takes some getting used to, but you manage. In fact, you feast. And you make sure to stuff whatever you can—rolls, silverware, maybe—into your bag to take home with you. It’s a very delicate thing, and it requires a lot of effort. But staring at the car with my friends, we realized that sitting at the table is useless if the food has gone bad.

The spectacle of it all just reinforced how much we weren’t wanted there in the first place. It seemed to be mocking us. Racism is nothing if not unoriginal, but these acts seemed so antiquated that they bordered on absurd. Like they didn’t care enough about us to even try to get creative. But racism, whether it’s interpersonal or institutional, is always about accessing and maintaining power—and with each new act of on-campus hate marking our difference as a threat, our tiny amount seemed to diminish.

Soon, news trucks began crowding around, with reporters talking to students about the campus climate and leaning on us to unpack what it all meant, to suggest our grand theory on what was driving America’s racism. The FBI opened an investigation into the incident. Suddenly, my tiny liberal arts school had been thrust into a national conversation on the persistence of racism on college campuses. Classes were canceled for a day for teach-ins and rallies. Student activists drafted lists of demands. As often happens when racism becomes spectacle and forces a period of reckoning, for a moment, we could imagine inviting so many people to the table that we didn’t have to squirrel away our rations anymore. There would be professors of color giving toasts in rooms that the colleges would pay for. Those rooms would be cleaned by workers who were paid fair wages and granted paid sick leave. Those wages would come from annual operating budgets that were generous with plentiful scholarships doled out to the most underrepresented students. The food would be locally sourced, organically grown, and devastatingly good. The dinner would become a party and the party would only grow.

But one week later, the party was over before even the guest list could be finalized. The FBI found that the professor had vandalized her own car. She was later convicted of two felony counts of insurance fraud and sentenced to a year in prison. Hate crime hoaxes are exceedingly rare, but that didn’t stop the Washington Post from sensational reporting on a spate of them that had taken place on college campuses that year. Everyone, it turns out, was looking for sympathy.

So Dear White People, the Netflix-original series that follows a group of mostly black students at the fictional Winchester University as they respond to racial hostilities on campus, seemed to hit a little too close to home. I had little desire to relive the traumas of being black and queer on a white college campus, particularly in a political climate that has only grown more hostile in the decade since I graduated.

As often happens when racism forces a period of reckoning, for a moment, we could imagine inviting so many people to the table that we didn’t have to squirrel away our rations anymore.

The series, the second season of which was released on May 4, was created by Justin Simien, a young black and gay director who, along with others like Emmy-winning writers Lena Waithe and Donald Glover, are part of a new era of Hollywood storytellers who are creating narratives from the perspectives we’ve least often heard from in popular culture. (Waithe produces and also guest stars in Dear White People.)

I’d underestimated what could happen when a story of hate is told out of love.

The second season focuses on the rise of alt-right white nationalism on Winchester’s campus. As Sophie Gilbert wrote for The Atlantic, the season “isn’t interested in Trump himself so much as what his presidency has rendered.” Perhaps most importantly, the spectacle of racism—the protests, the outrage—aren’t the bulk of the show. They’re the backdrop. What the season focuses on instead are those crucial and complex relationships that become literal lifelines for students of color. Sam (Logan Browning) and Joelle (Ashley Blaine Featherson), for instance, are two black women navigating life and love on Winchester’s racially polarizing campus. It’s one of the strongest representations of black female friendship on television. Another focal point is Sam’s relationship with Coco (Antionette Robertson), another student whose rough childhood created an assimilationist approach to politics; it is much rockier than her relationship with Joelle, but it’s nonetheless important, as black women are often represented in competition with one another instead of in community.

The show’s focus on the relationships between students of color, and how they in turn fail and succeed, is crucial because so much of the conversation about identity on college campuses focuses on outrage. But what’s missing is an understanding of love. We name ourselves—queer, nonbinary, trans, indigenous, black, mixed—because we love ourselves, or, at least, we’re trying. And when you find a seat at the table of power, no matter how big or small, the only way you can stay there is by finding people like you. The friends I stood with in front of that car my freshman year wound up being the same people who helped carry me through. When the cameras left and the narrative shifted, subtly, against us, we could only rely on each other to say that our pain was not a spectacle. In one pivotal episode, Coco puts her differences with the more radical students on campus aside and joins Joelle and Sam on a somber road trip to Sam’s hometown. It’s a significant act of solidarity, particularly as each character endures what, until then, has been the toughest semester of their lives personally, and politically.

As political movements in the US do the messy and painful work of pushing for systemic change in very public ways, it’s easy to probe for their flaws, to focus on how they do not live up to their stated ideals. In fact, the show’s second season adds a layer of depth to Coco, Joelle, and Sam that peels back the caricatures of college students in a way that few shows today are willing to do. Most importantly, it does away entirely with the idea of a solitary savior, the ultimate leader who carries a movement on his shoulders (and it is always a man) and marches us to a happier ending. Dear White People, whose storylines are ripped from the headlines in places like Berkeley and Missouri, shows very plainly the feminist adage that the personal is political, that even the best and loudest among us are flawed and messy, and the work of cleaning up that collective mess, for better or worse, is a collective act, and we all need to pick up a broom.

The show does away with the idea of a solitary savior, the ultimate leader who carries a movement on his shoulders (and it is always a man) and marches us to a happier ending.

Like its characters, Dear White People is impactful and imperfect. For one, the characters occasionally break into hashtags at the end of statements, ostensibly to emphasize a point. I am either too old or too cynical to believe that people actually talk in hashtags, which are never funny when said in real life. Grown-ish, the ABC spin-off created by show runner Kenya Barris, employs this too, and every time it happens, I feel pulled out of the show’s narrative, like a writer had to throw it in so a middle-aged studio exec would be reassured that the show is reaching its target demo.

But the overall message of Dear White People still gets through: that the showdowns on America’s college campuses are worth paying attention to, because if you look closely, you might learn something.