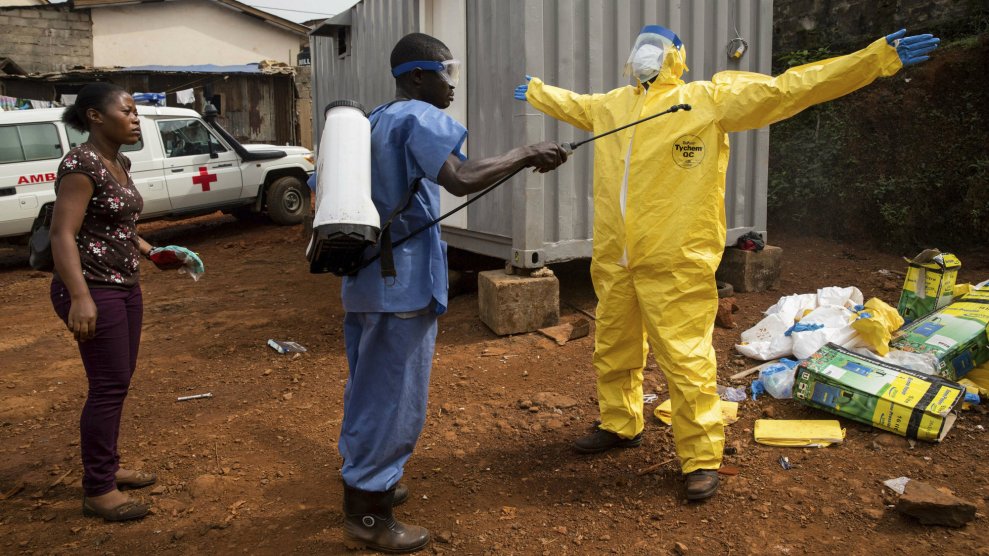 An ambulance driver in protective clothing is disinfected with chlorine after returning from transporting a Ebola victim to a treatment center December 15, 2014 in Freetown, Sierra Leone.Martine Perret/Planet Pix/ZUMA

Ebola has returned just as the Trump administration has undermined the ability of the United States to respond. On Tuesday, the World Health Organization announced an outbreak in the Democratic Republic of the Congo involving two confirmed Ebola cases. (There are 32 more suspected cases, including 18 deaths, as of Wednesday, according to WHO.) Just hours before the declaration of the outbreak, President Trump asked Congress to kill emergency funding to fight the disease.

“Having emergency funds is a vital part of our security,” says Ron Klain, a lawyer who was Obama’s Ebola czar. “The question is: Do we want to be prepared?”

Ebola spreads quickly, and launching a rapid response is crucial to prevent an outbreak from escalating. The outbreak in the northwest city of Bikoro is the ninth in the DRC since 1976, and no where near the scale of the 2014-2015 epidemic, which killed more than 11,300 people. Public health experts worry that travelers could carry the virus from Bikoro along the nearby Congo River and Ubangi rivers, to the capital, Kinshasa, with a population of about 11 million—or the capital cities of the Republic of the Congo to the south and the Central African Republic to the north. “If you can detect Ebola on day one,” Rebecca Katz, an associate professor and co-director of Georgetown University’s Center for Global Health Science and Security, says, “then your outbreak ends after one or two patients.” The DRC’s top virologist told The Atlantic that even after a swift response in the DRC, it could take three to four months to control the outbreak.

“If you can detect Ebola on day one, then your outbreak ends after one or two patients.”

The 2014-2015 Ebola epidemic was the largest on record, with the contagion sweeping swiftly through West Africa. A combination of factors, such as weak health infrastructures and an inadequate response in early stages, allowed the epidemic to spiral out of control. In response, Obama asked Congress to appropriate about $5.4 billion to fight the epidemic in West Africa and reserve the remaining funds to detect and respond to future Ebola outbreaks.

On Tuesday, Trump said he wanted to rescind the remaining $252 million, as part of his plan to cut down on “excessive spending.” The White House announcement described Trump’s action as putting  “American taxpayers first by addressing irresponsible Federal spending.”

Klain described the request as a serious mistake. “It means that when we have a serious problem in the future—it’s just a question of when—we will have to wait for Congress to act,” he says.

Another blow was dealt to public health preparedness this week with the departure of Rear Admiral Tim Ziemer, the head of global health security on the White House National Security Council. Ziemer, the administration’s top biodefense expert, who has been called “one of the most quietly effective leaders in public health,” departed after the recently appointed national security adviser John Bolton eliminated the office he oversaw. His exit follows the April departure of White House homeland security adviser Tom Bossert, who pushed to develop global health security.

Though Trump has so far remained silent on this outbreak, the 2014-2015 Ebola epidemic was a flashpoint in his political career. He blamed Obama for a case of Ebola in New York and suggested shutting down all flights from West Africa.

Ebola has been confirmed in N.Y.C., with officials frantically trying to find all of the people and things he had contact with.Obama’s fault

According to journalist Reid Wilson, in his book Epidemic: Ebola and the global scramble to prevent the next killer outbreak, “An analysis by the White House’s Office of Digital Strategy later found that Trump’s tweets represented a turning point, the moment when fear of the deadly virus began to infect the American public.”
Dr. Steven Hatch, an associate professor of medicine at the University of Massachusetts Medical School, specializing in infectious disease and immunology, worked in Liberia fighting the Ebola epidemic. Last year he wrote for Mother Jones on how Trump used the epidemic to promote his xenophobic agenda. “Ebola care is scary enough on a personal level,” Hatch says, but responding to it under this administration brings an added anxiety that the government might “make you a pariah and reject you. A lot of doctors got scared away, and that was before Trump.”
This is only the most recent example of Trump’s repeated efforts to cut global health security funding from the budget, efforts that Congress has rejected. His actions reveal an isolationist mindset in the administration that Klain says is fundamentally ineffective. “Our best way to keep Americans safe is to find these places overseas so that diseases don’t come here,” he says. “There’s just no wall we can build that’s high enough to keep diseases out.”