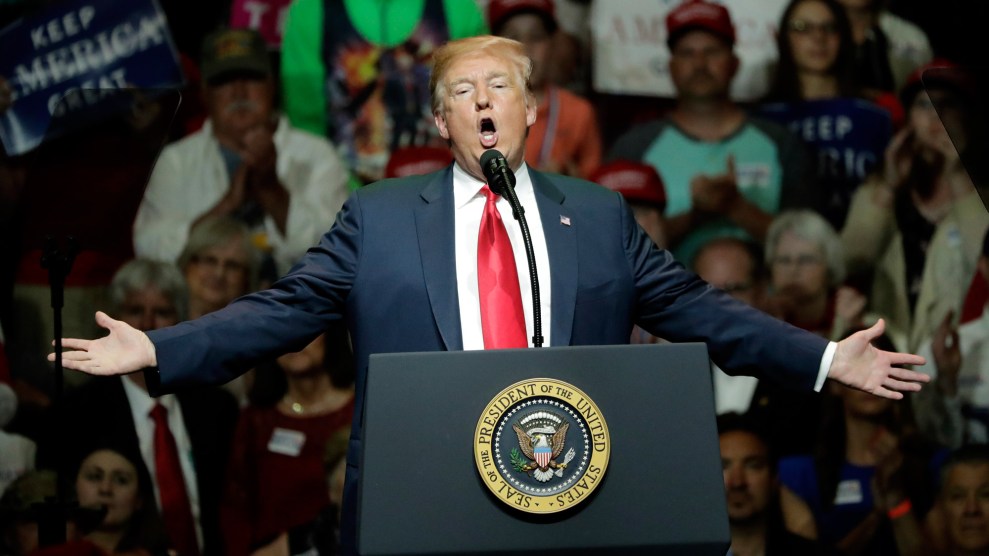 On Monday afternoon, President Donald Trump called the recent leaks at the White House an “over exaggeration” put out by the “fake news” media to make the administration look bad. He then made a familiar call:

The so-called leaks coming out of the White House are a massive over exaggeration put out by the Fake News Media in order to make us look as bad as possible. With that being said, leakers are traitors and cowards, and we will find out who they are!

Trump’s latest threat came amid backlash, after it was reported that White House special assistant Kelly Sadler had mocked Sen. John McCain, who is suffering from brain cancer, in a closed-door meeting last week. After McCain came out in opposition to CIA director nominee Gina Haspel, Sadler said that “it doesn’t matter, he’s dying anyway,” the Hill reported, citing a source familiar with what was said. (The White House has opted not to apologize for Sadler’s comments.)

Over the weekend, Axios reported that White House press secretary Sarah Huckabee Sanders berated her staff for the leaks, telling them: “I am sure this conversation is going to leak, too. And that’s just disgusting.” (Indeed, Sanders’ rant was promptly leaked.) On Sunday, an administration official explained to Axios’ Jonathan Swan why Team Trump is such a sieve: “The first is personal vendettas. And two is to make sure there’s an accurate record of what’s really going on in the White House.”

President Trump has long fumed over White House leaks and has sought to crack down on them. In March, he slammed “leaking, lying and corruption” at the FBI, State Department, and Justice Department. But, as BuzzFeed’s Chris Geidner points out, the president sometimes leaks, too.

3. Trump is a known, and well-established, leaker.