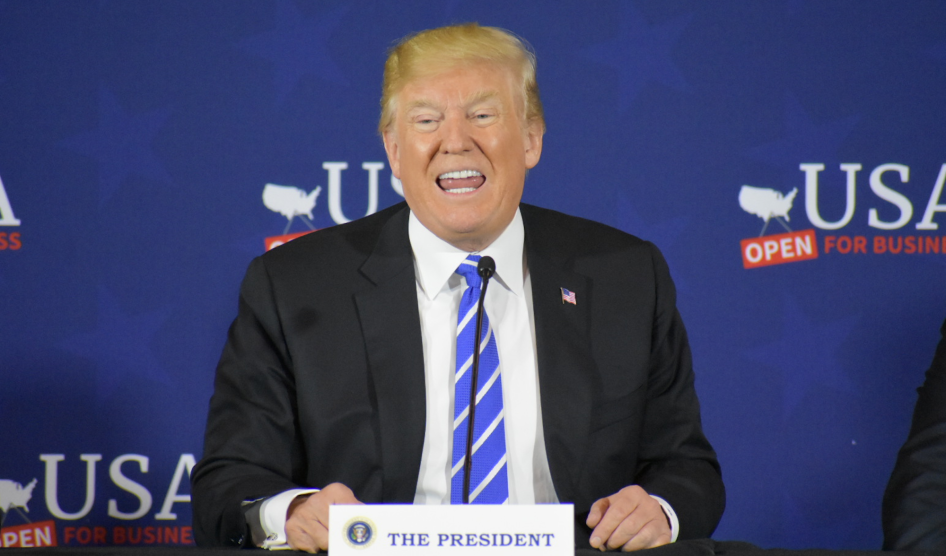 President Donald Trump kicked off a Thursday roundtable discussion on tax reform in West Virginia by targeting Sen. Joe Manchin, the Democratic senator in the deeply conservative state Trump won by a landslide, for voting against a range of his administration’s priorities, including the GOP tax overhaul and the effort to dismantle Obamacare.

“You’re gonna have a chance to get a senator that’s gonna vote for our program,” Trump told the crowd of cheering West Virginians.

That, at least, was an accurate statement.

The truthful portion of the president’s remarks ended soon after, as Trump pivoted to discussing his favorite issue of the week—illegal immigration—and started making a number of false claims. Trump attempted to defend his highly inflammatory remarks from the launch of his presidential campaign branding Mexican immigrants as “rapists” by asserting, with no evidence, that the group of Central Americans who had been marching to the US and Mexico resulted in women being “raped at levels that nobody has ever seen before.”

The reality is that the group of migrants Trump has been obsessively tweeting about this week—a group of roughly 1,200 people traveling north to escape violence in their home countries—had banded together to protect themselves from potential rapists and kidnappers. Trump’s false remarks on Thursday flipped the script to attack the very people vulnerable to such danger as having created it.

Trump then moved onto California, a state his administration is engaged in several high profile lawsuits with, to slam Oakland Mayor Libby Schaaf for what he claimed was “obstruction of justice” for warning residents in February of an impending raid by federal Immigration and Customs Enforcement. Several legal experts have disputed the charge; one called the likelihood of the Department of Justice bringing charges against Schaff “extraordinary.”

With California on his mind, Trump then alleged rampant voter fraud in the Golden State.

“In many places, like California, the same person votes many times. You probably heard about that. They always like to say ‘Oh, that’s a conspiracy theory.’ Not a conspiracy theory, folks. Millions and millions of people. And it’s very hard because the state guards their records.”

Trump’s reoccurring accusations of voter fraud—an apparent excuse for losing the popular vote—have been repeatedly debunked. In January, Trump shut down the commission he formed to investigate his false voter fraud theories, although Thursday’s remarks show he remains committed to the conspiracy theory.

Trump: "In many places, like California, the same person votes many times .. not a conspiracy theory, folks" pic.twitter.com/ttVW45uwWM

The error-ridden opening, which was largely devoid of discussion about tax reform, concluded, allowing Trump to call on West Virginians in the room to lavish praise on his administration’s achievements.

.@realDonaldTrump tosses his "prepared" remarks into the air as talked about a variety of issues as he participated in a roundtable discussion on tax reform in White Sulphur Springs, WV. pic.twitter.com/Tzfd0gqh27