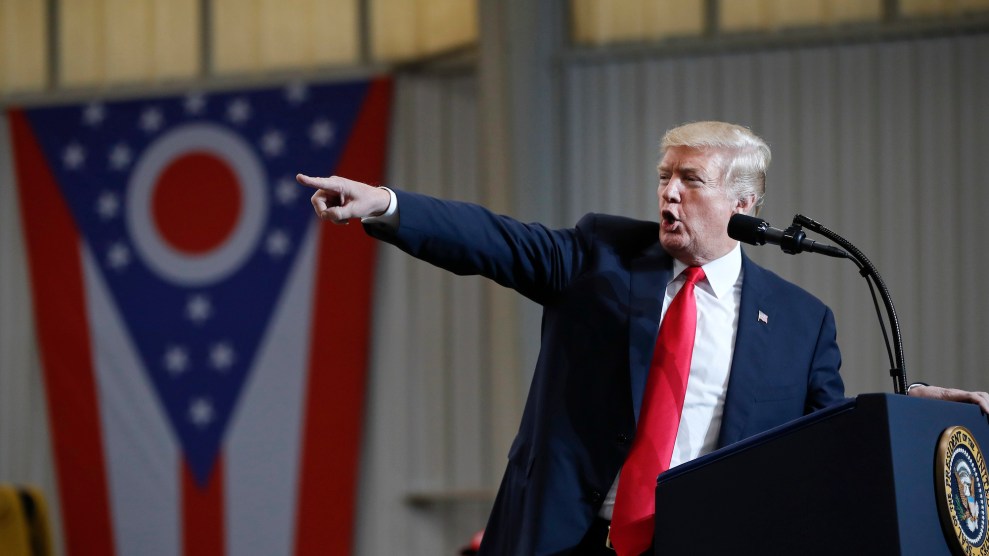 President Donald Trump is doubling down on his Easter Twitter attack on Central Americans seeking asylum in the United States. In a series of tweets on Monday morning, Trump said Mexico must stop caravans of Central Americans fleeing persecution and claimed that “our country is being stolen.”

Mexico has the absolute power not to let these large “Caravans” of people enter their country. They must stop them at their Northern Border, which they can do because their border laws work, not allow them to pass through into our country, which has no effective border laws…..

Trump tweeted similar claims on Sunday after Fox News reported on a caravan of more than 1,000 Central Americans heading through Mexico to claim asylum in the United States. US and international law protect asylum-seekers’ right to apply for protections from persecution. The Trump administration has unsuccessfully pushed Congress to weaken those protections by making it easier to detain asylum-seekers and quickly reject their claims. Rep. Zoe Lofgren (D-Calif.), the top Democrat on a House immigration subcommittee, has said the reforms favored by the Trump administration would “all but destroy the US asylum system.”

Trump is claiming that the caravan members are coming to the United States to obtain work permits under Deferred Action for Childhood Arrivals (DACA), the Obama-era program that protects nearly 700,000 Dreamers who came to the country as children. But that’s not possible. New DACA applications are not being accepted. Even if they were, the caravan members’ application would not be approved. To qualify for DACA, a person has to have lived in the United States since June 2007.

Adolfo Flores, a BuzzFeed reporter who is traveling with the caravan, wrote on Twitter that he has not heard people mention DACA. In September, Trump moved to end DACA, but two court decisions have forced the administration to continue accepting renewal applications.

For whatever reason Trump is conflating two different issues, DACA and reasons these people are on the caravan. I’ve spoken with dozens of people who cite violence, instability, and poverty as reasons for leaving. Not one has mentioned DACA.

Trump also falsely claimed that Democrats want “no borders” and don’t care about the DACA-eligible immigrants known as Dreamers. In February, Democrats overwhelmingly voted to fund Trump’s border wall in exchange for providing a path to citizenship for Dreamers. The deal fell apart when Trump insisted the deal include severe cuts to legal immigration.

Trump is now calling on Congress to invoke the “nuclear option,” which would allow the Senate to pass immigration legislation with 50 votes, instead of the 60 votes that are needed today. The hardline immigration bill favored by the White House would eventually reduce legal immigration by 38 percent, according to the libertarian Cato Institute. In February, moderate Republican senators voted against a similar bill that cuts legal immigration by targeting family-based migration, which Trump derides as “chain migration.”

On Sunday, Mexico’s foreign secretary, Luis Videgaray Caso, appeared to push back against Trump. Videgaray pointed out that Mexico and the United States already work closely on migration issues. “An inaccurate news report should not serve to question this strong cooperation,” he wrote on Twitter, apparently referring to the Fox News story.

“Upholding human dignity and rights is not at odds with the rule of law,” Videgaray stated before adding, “Happy Easter.”