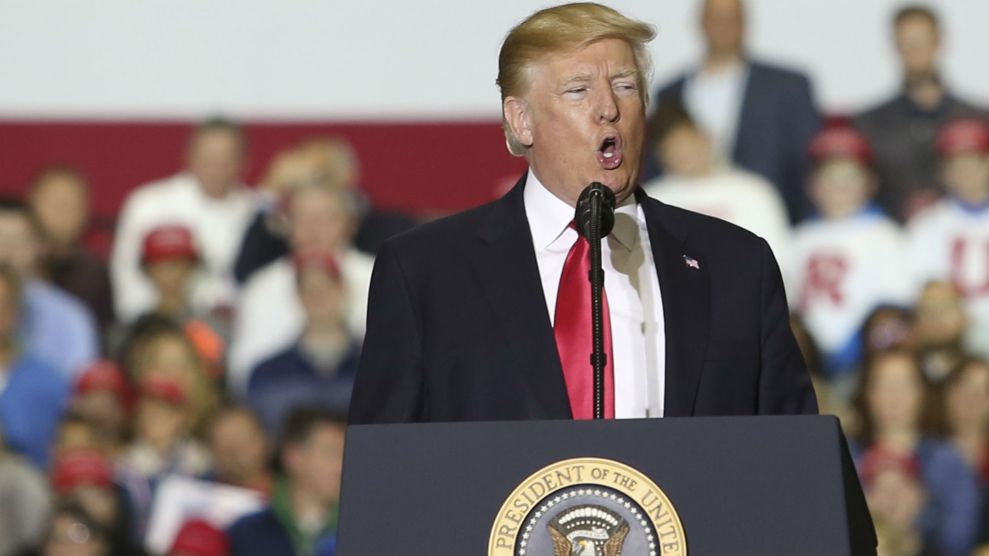 For the second year in a row, on Saturday night President Donald Trump opted to skip the annual White House Correspondents’ Association dinner and instead hold a rally.

The rally in Washington Township, Michigan came on the heels of Friday’s historic meeting between the leaders of North and South Korea, where the two presidents vowed to work to end the Korean War and denuclearize the region. Trump claimed that the South Korean president gave the US “tremendous credit” for this foreign policy achievement, and as he further discussed the Korean summit, the crowd started a boisterous chant calling for Trump to be awarded the Nobel Peace Prize.

OMG while Trump talks about North Korea, the crowd interrupts him by chanting, “NO-BEL! NO-BEL!” pic.twitter.com/k3PyAlYNkF

The chant reflects a mounting movement on the right for Trump to get the prestigious prize. A Friday Fox News op-ed declared that Trump, “not Obama,” deserves the Nobel Peace Prize.

“At the conclusion of the day-long summit between North Korean dictator Kim Jong Un and South Korean President Moon Jae-in Friday, one thing was clear: the meeting would never have taken place if not for President Trump,” the op-ed noted. “For this achievement, President Trump deserves the Nobel Peace Prize.”

When will we see the headline: “Trump Ends the Korean War”? Unlike Obama, he actually deserves the Nobel Peace Prize. @realDonaldTrump

And she doubled down on the idea during her show later that day, calling Trump “almost a shoo-in” for the prize. One of the guests on her show, Rep. Luke Messer (R-Ind.) made the same point:

Messer has been trying to gather congressional support to nominate Trump for the prize since March—and on Friday, he issued a statement renewing that effort: “Following this historic announcement, President Trump should get the Nobel Peace Prize. Our peace through strength strategy is delivering never before seen results,” he said.

Messer has support for this point in Washington—Sen. Lindsey Graham (R-S.C.) told Fox News on Friday that he thinks Trump should win the prize if peace and denuclearization are achieved on the Korean Peninsula. Former Trump admin appointee Carl Higbie—ousted in January over racist, sexist, and anti-gay remarks—weighed in with his support on Twitter.

Where is @realDonaldTrump #NobelPrize for getting N & S Korea to agree to peace? I’ll wait…