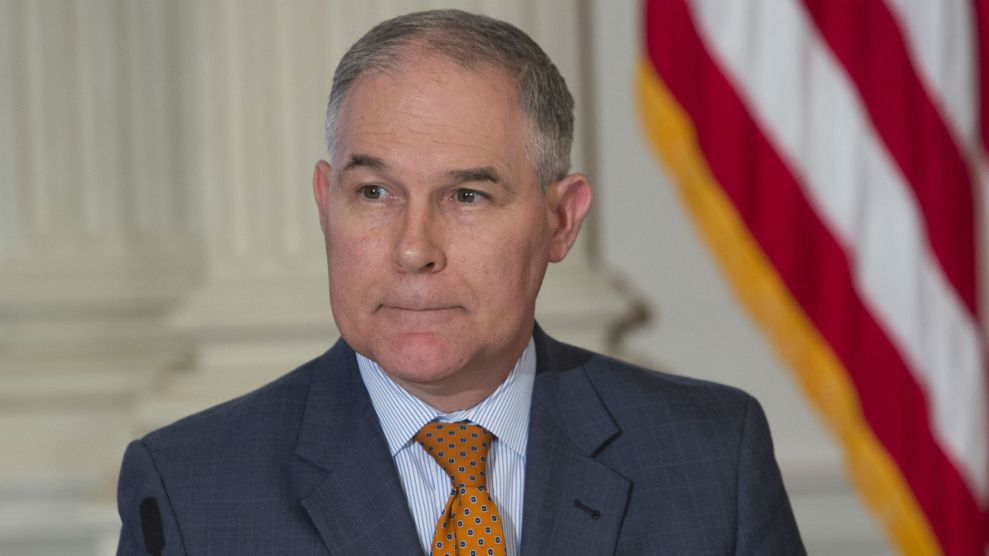 Congressional Democrats on Thursday released an eye-popping letter that describes a pattern of what the lawmakers call “wasteful spending, unethical behavior, and inappropriate use of resources and personnel” by Environmental Protection Agency chief Scott Pruitt. The new allegations in the letter come from Kevin Chmielewski, a senior EPA official who served as Pruitt’s deputy chief of staff until he was put on unpaid administrative leave after raising concerns about Pruitt’s actions.

Chmielewski, a Republican, is a supporter of and former campaign aide to Donald Trump. He told members of Congress recently that he spoke out about Pruitt’s lavish spending and other questionable behavior because “right is right and wrong is wrong.” A spokesman for the EPA said in a statement to reporters: “We will respond to members of Congress through the proper channel.”

Here are nine of the most shocking things Chmielewski told Congress about Pruitt’s tenure in charge of the EPA.

“The Nightmare Is Now Yours”

When Chmielewski first started his job as a senior official at EPA, Pruitt’s chief of staff, Ryan Jackson, had a message for Chmielewski: “The nightmare is now yours.”

Chmielewski told Congress that as he learned more about Pruitt’s spending and travel habits, he found that “every time you tried to find out about something you got in trouble.”

A Refinished Desk, a Standing Desk, and Smithsonian Art

Pruitt spent far more than the allotted $5,000 for office renovations and decorating, Chmielewski claims. That included refinishing an antique desk, paying for leases for art loaned out from the Smithsonian Institution, and building a $43,000 soundproof phone booth. (The phone booth construction project has been a subject of controversy since last fall.)

Pruitt used the EPA’s director of scheduling and advance as his “personal real estate representative, spending weeks improperly using federal government resources and time to contact rental and seller’s agents, and touring numerous properties in which [he] might wish to reside,” according to the allegations recounted in the letter from the Democratic members of Congress.

Chmielewski told lawmakers that Pruitt directed one of his aides to enter into a $100,000-a-month contract for a private jet rental for the EPA, confirming a report last week by the New York Times. The EPA administrator’s annual travel budget is $450,000. Chmielewski says he intervened to stop the arrangement.

“Find Me Something to Do”

Pruitt apparently instructed his staff to “find me something to do” in particular cities and countries he wanted to visit in order to justify the use of taxpayer dollars for the trips, according to Chmielewski. He also sought to fly on Delta Air Lines even when it wasn’t the federal government’s contract carrier on a certain route so that he could “accrue more frequent flier miles.”

Pruitt insisted on staying at expensive hotels that exceeded the federal government’s per diem rate, “sometimes even exceeding the 300 percent cap permitted in exceptional circumstances.”

Pruitt has earned a reputation for insisting on a huge, round-the-clock personal security detail that sucks resources away from EPA investigation of environmental crimes. But Chmielewski alleges that, on two international trips, Pruitt refused to stay at hotels recommended by the US embassy that had more rigorous security standards in favor of “more expensive hotels with fewer standard security measures.”

The final straw in Pruitt’s eyes, according to Chmielewski, was when Chmielewski refused to retroactively approve a first-class flight from Morocco to the United States for a trusted aide to Pruitt. The congressional Democrats’ letter to Pruitt says that Chmielewski “told our staffs that following his refusal, Chief of Staff Ryan Jackson called Mr. Chmielewski into his office and informed him that you [Pruitt] wished to fire or reassign him.”

Pruitt’s Head of Security Was Reported to Local Police

Pruitt’s head of security allegedly announced that he was going to go to Chmielewski’s home to seize his EPA credentials after Chmielewski had fallen out of favor with Pruitt. On a conference call that included the EPA’s liaison to the White House, Pruitt’s security chief said he “didn’t give a fuck who is on this call” when he described his plan to retrieve Chmielewski’s credentials, according to the letter. Chmielewski told Congress that he reported the security chief’s comments to the local police, the White House Office of Presidential Personnel, and EPA officials.

Read the full letter, signed by two US senators and three House members: