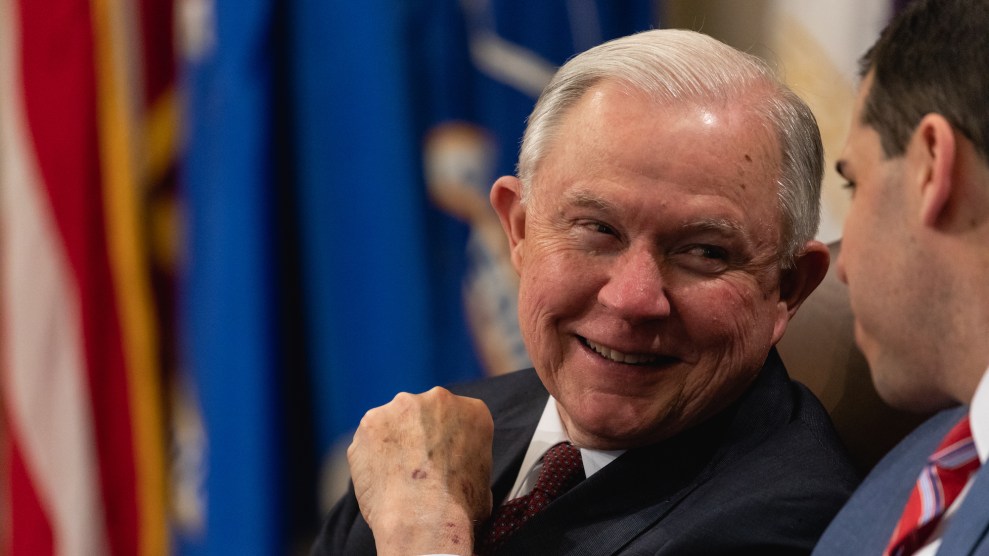 Attorney General Jeff Sessions has decided not to steer clear of the Justice Department’s investigation into President Donald Trump’s personal lawyer, according to a Tuesday report.

Sessions’ decision not to recuse himself from the probe into Michael Cohen raises questions both about his earlier pledge to recuse himself from any investigations related to the 2016 presidential election, and about the details of the Cohen probe itself. Bloomberg, which first reported Sessions’ decision to retain oversight, said the attorney general would consider stepping back from certain portions of the Cohen investigation.

Justice Department spokeswoman Sarah Isgur Flores declined to confirm or comment on Sessions’ decision to Mother Jones. Sessions has “said repeatedly that he consults career ethics advisors on any matters that come to his desk to determine whether he needs to be recused—as do all lawyers at the department,” Flores noted in an email.

In March 2017, Sessions announced that he would recuse himself from “any existing or future investigations of any matters related in any way to the campaigns for President of the United States” due to his role as a campaign adviser to Donald Trump.

It’s hard to see how the Cohen investigation wouldn’t be related to the campaign. The probe, which is being conducted by the office of the US attorney for the Southern District of New York, reportedly relates to Cohen’s election-eve payment of $130,000 through a Delaware shell company to Stormy Daniels, the pornographic actress. Cohen says he paid Daniels as part of a contract in which she agreed not to publicly discuss her claim that she had sex with Trump in 2006, when he was already married to his wife, Melania. Investigators appear to be looking at whether the payment, which Cohen claims he made without Trump’s knowledge, constituted an in-kind contribution to the Trump campaign that would exceed the legal limit for donations. Neither Cohen nor the Trump campaign reported the payment as a contribution.

In March 2017, Sessions said he would recuse himself from “any existing or future investigations of any matters related in any way to the campaigns for President.”

“To the extent campaign finance issues are part of the investigation, Sessions should be recused under department rules,” says John Bies, a former deputy assistant attorney general in the Office of Legal Counsel who is now chief counsel at American Oversight, a watchdog group that has faulted Sessions for not adhering to his recusal.

Sessions’ original recusal caused him to step aside from the FBI’s investigation into the Trump campaign’s contacts with Russia. That investigation was later taken over by Special Counsel Robert Mueller. Sessions’ recusal enraged Trump, who has publicly berated his attorney general for failing to protect him from the probe.

Since then, under White House pressure, Sessions has appeared to walk back his recusal. In a letter last year, the Justice Department acknowledged that Sessions played a role in responding to congressional Republicans’ calls for the department to investigate issues related to Hillary Clinton, when it boasted he personally “directed senior federal prosecutors” to undertake such a review. Sessions also oversaw a decision to fire FBI Deputy Director Andrew McCabe, though Trump had urged McCabe’s ouster due to McCabe’s role in probes related to both major 2016 presidential candidates. (Check out our timeline of Sessions’ apparent recusal violations.)

Trump renewed his attack on Sessions’ original recusal after federal agents raided Cohen’s property on April 9. On Saturday, Trump tweeted that Cohen will not “flip” and cooperate with prosecutors to build a case against the president. The New York Times has reported that Trump sees the investigation into Cohen as a bigger threat than Mueller’s probe.

Sessions’ decision not to recuse himself from Cohen’s case means that he can receive briefings and retain some control over an investigation that threatens Trump. Sessions could even influence decisions by prosecutors, including whether they should pursue subpoenas. His decision  leaves Session in a position where Trump can seek information about the course of the probe, or to pressure him to curtail it.

Bies says that Trump’s attacks on Sessions highlights the need for Sessions to recuse himself from the Cohen probe. “It would be very troubling if the president’s pressure affected how the attorney general thought about when he should recuse himself,” Bies says.