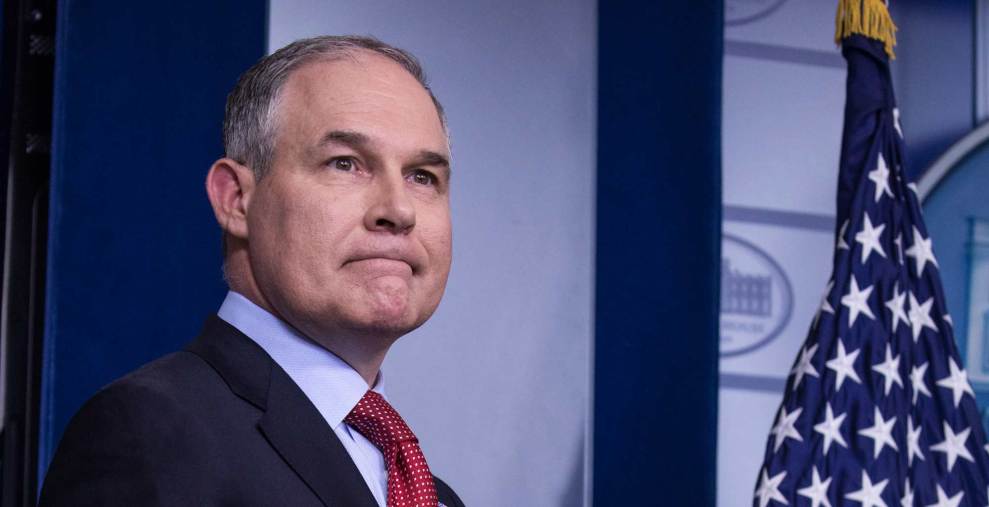 Pruitt has recently become embroiled in a number of scandals and controversies, many relating to his elaborate expenditures on security and travel, and to personnel assignments that have seen his personal critics sidelined. Pruitt’s arrangement to pay as little as $50 dollars a night to say in a well-located and furnished Washington condominium has also attracted scrutiny; the apartment is owned by the wife of a lobbyist who works with interests who have matters before the EPA.

The House investigators are seeking records documenting Pruitt’s travel, along with interviews with five agency officials, including Pruitt’s chief of staff and Pasquale Perotta, his head of security. You can read the committee’s request below:

Before Pruitt’s ethical troubles came to dominate the conversation around the EPA, discussion of Pruitt’s tenure tended to focus on his steps towards fulfilling President Donald Trump’s campaign promise to “get rid” of the EPA “in almost every form.” Here’s how Mother Jones’s Rebecca Leber explained his impact in her recent profile of Pruitt.

In just his first year in office, Pruitt has already made stunning strides in that direction. He’s dismantling the Obama administration’s landmark Clean Power Plan, which imposed greenhouse gas limits on fossil-fuel-fired power plants. He has slashed enforcement efforts against polluters and tried to repeal rules meant to safeguard drinking-water supplies. He has threatened to roll back fuel economy standards. He’s moved to weaken new rules for smog, coal ash, and mercury pollution, poorly enforced a new toxic-chemical law, and refused to ban the dangerous pesticide chlorpyrifos. He’s taken aim at dozens of lesser-known rules covering everything from safety requirements for replacing asbestos to emergency response plans in hazardous chemical facilities. In the process, Pruitt has driven away hundreds of experienced EPA staffers and scientists while putting old friends and industry reps in charge of key environmental decisions—a troubling trend that has led former EPA administrators from both parties to warn that he is doing irreversible damage to the agency.