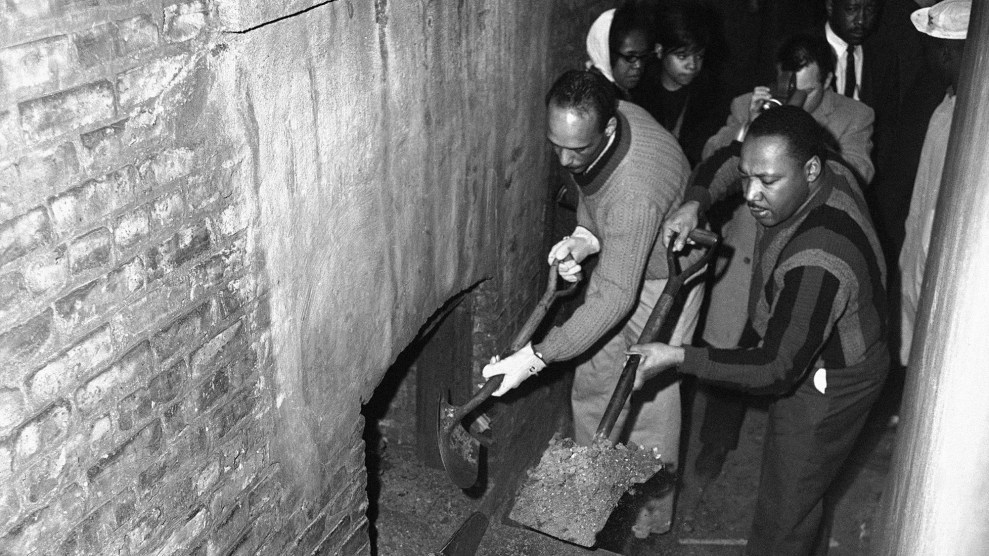 In a video message on Wednesday, President Donald Trump praised Martin Luther King Jr. on the 50th anniversary of his death. “I ask every American to join me in remembering this great American hero and to carry on his legacy of equality, justice, and freedom,” Trump said.

Today we honor Dr. Martin Luther King, Jr. on the 50th anniversary of his assassination. Earlier this year I spoke about Dr. King’s legacy of justice and peace, and his impact on uniting Americans. #MLK50 Proclamation: https://t.co/XXtPO0VX5A pic.twitter.com/SH0esMSyMT

What Trump didn’t mention is that he was once sued for violating a key part of King’s legacy.

The Fair Housing Act of 1968—the last major piece of 1960s civil rights legislation, and one that King had vigorously pushed for—was passed a week after King’s assassination. Five years later, Trump and his father, Fred, were sued by Richard Nixon’s Justice Department for violating the law by refusing to rent to black tenants at Trump-owned apartment complexes in New York City. According to the New York Times, applications from black apartment-seekers were marked “C” for “colored” and rejected by Trump Management employees.

Trump Management eventually agreed to a consent decree and gave the New York Urban League a weekly list of its apartment vacancies. But in 1978, the government accused Trump of violating the agreement. “We believe that an underlying pattern of discrimination continues to exist in the Trump Management organization,” a Justice Department lawyer wrote to Trump’s attorney.

Fair housing was a critical priority for King in the last years of his life. In 1966, he moved into a low-income tenement in Chicago to advocate an end to housing discrimination. “We are here today because we are tired,” King said during a speech at Chicago’s Soldier Field. “We are tired of paying more for less. We are tired of living in rat-infested slums.”

The Fair Housing Act banned racial discrimination in housing, but 50 years later, with Trump as president, the Department of Housing and Urban Development has dramatically scaled back enforcement of the law. HUD Secretary Ben Carson even removed the words “free from discrimination” from the agency’s mission statement.