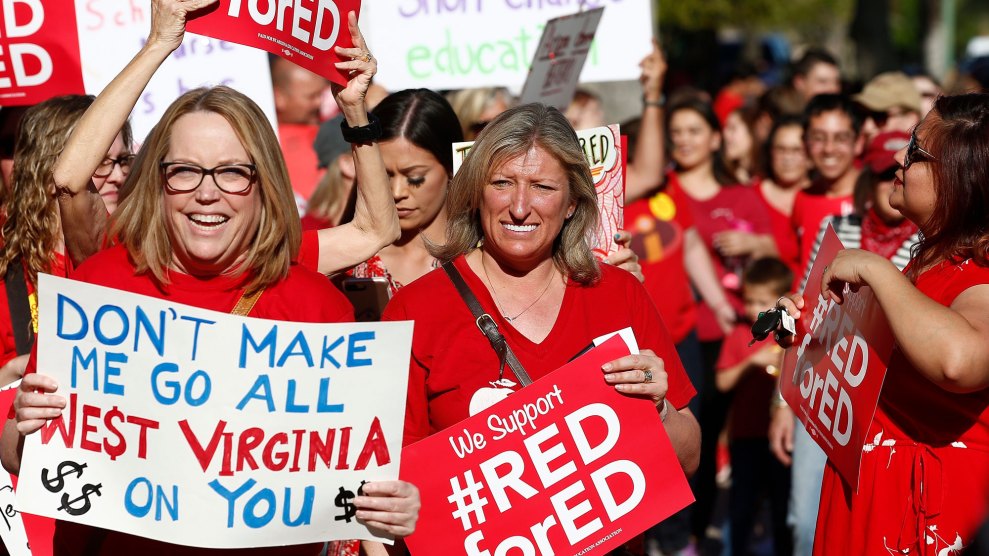 Update 5:54 p.m. ET: As the Arizona Senate adjourned for the day without an approved pay raise for teachers, at least 50,000 educators and others flooded the statehouse in one of the largest walkouts to date. While lawmakers were in session, teachers filled the Capitol House gallery. On Thursday, Arizona Gov. Doug Ducey said in a statement that he was focused on getting his teacher raise proposal approved. “To parents, I understand the pain and pressure caused by today’s strike,” Ducey said. “I want you to know, I am working to get this 20 percent raise passed at the Legislature. But we need your help to make it a reality.”

LOOK: A stunning image of just how many teachers are marching to the Arizona State Capitol. #RedForEd pic.twitter.com/1KygktI99N

No, this much red on a light rail train doesn't mean we're headed to Diamondbacks game. But we are headed to Chase Field for something even better.#REDforED@AZEdUnited@ArizonaEA pic.twitter.com/Kic6HuLt6E

Tucson teachers kick off the walkout by lining every intersection along Broadway for FIFTEEN MILES.

On March 7, just a day after West Virginia teachers successfully pressured lawmakers to pass a $2,000 pay raise, scores of Arizona teachers wore red to protest low wages and cuts to school funding. Thursday morning, after similar demonstrations in Oklahoma, Kentucky, and Colorado, Arizona educators walked out of schools to make their demands directly to the state’s decisionmakers.

Somewhere between 30,000 and 50,000 teachers are expected to rally outside the state capitol in Phoenix. At least 101 school districts and charter schools are closed, affecting 840,000 students, the Arizona Republic reported. “We’ve been pushed around for too long,” says Noah Karvelis, a music teacher in the western Phoenix suburb of Tolleson and leader of Arizona Educators United. “West Virginia showed us you don’t have to sit there and take it.”

“We’ve been pushed around for too long. West Virginia showed us you don’t have to sit there and take it.”

Since the nine-day strike in West Virginia, educators have protested at statehouses to pressure Republican-led legislatures to reverse years of cuts that have made it difficult to retain teachers and led to growing class sizes and outdated textbooks. Teachers in Oklahoma received a $6,000 average raise but failed to win the additional increases to school funding—raises for support staffers and $33 million for new textbooks—they were seeking. Teachers in Kentucky pushed back against a new law that reforms the state’s pension system and demanded more school funding; the state attorney general and Kentucky Education Association eventually sued over the legislation. And in Colorado, where reductions have led some districts to trim staff and implement four-day school weeks, teachers flooded Denver to rally against cuts to school funding in a state that underfunds its schools by $822 million each year.

Like their colleagues protesting elsewhere, teachers in Arizona are among the lowest paid in the country. In the 2016-17 school year, Arizona teachers made $47,403, a nearly 10 percent drop from the 2009-10 school year, according to the National Center for Education Statistics. In the last decade, Arizona lawmakers have cut nearly 37 percent of total state funding for schools, adjusted for inflation, according to the Center on Budget and Policy Priorities. In 2015, the state spent just $7,489 per student, far below the national average of $11,392, according to the Census Bureau. At the same time, Arizona lawmakers sliced income and corporate taxes, limiting funds for social services—moves that Arizona teacher organizers are calling for the Legislature to pause.

Teachers in Arizona are among the lowest paid in the country, and in the last decade, lawmakers have cut nearly 37 percent of total state funding for schools.

In late March, members of Arizona Educators United, a grassroots group of teachers initially organized on Facebook, began signaling that a walkout was a possibility. On April 11, Arizona educators, under the banner of #RedForEd, staged “walk-ins” at more than 1,000 schools throughout the state. On April 13, Gov. Doug Ducey pitched a plan to raise teacher salaries by 20 percent over three years. If passed, it would cost the state $648 million and rely not on tax increases but on an optimistic economic forecast for the state and reduced Medicaid spending. But organizers for Arizona teachers have expressed skepticism over how financially stable the plan is.

Last Thursday, Arizona Educators United and the Arizona Education Association, the state’s teachers’ union, announced that after a vote from 57,000 teachers, 78 percent agreed to walk-out. On Monday, Ducey told a local radio station that he didn’t know why the walkout was moving forward after he unveiled his plan. “Whatever the leaders in that movement are doing, I don’t think they’re really representing the teachers that are there for their kids every day, that are there for their parents,” Ducey told a local radio show. Ducey’s proposal, says Arizona Educators United leader Karvelis, felt like an “empty promise” and failed to outline a long-term plan for how the state would invest in schools. A separate proposal, floated by Republican state Rep. Noel Campbell, would raise the sales tax in Arizona by 1 cent for three years, sending $880 million to traditional public and charter schools.

A survey of 172 school districts and charter schools found that about 2,000 teaching positions in Arizona had gone unfilled four months into the school year.

Teachers have called for a restoration of school funding cut in the last decade, a total of $1 billion, and criticized Ducey for failing to address the group’s other demands: competitive pay for school staffers, bringing back salary schedules with annual raises, and pausing tax cuts until school funding is restored. The state also faces a shortage of teachers filling classrooms: A survey of 172 school districts and charter schools by the Arizona School Administrators Personnel Association in December found that about 2,000 teaching positions had gone unfilled four months into the school year. At least 3,400 other positions were filled by teachers who didn’t meet state standards, including long-term substitutes, those with pending certifications, and those who were emergency certified, meaning they have a degree but lack teacher certification.

“When they cut this funding, you are seeing students sitting in broken desks studying out of 25-year-old textbooks without the proper resources for them to be successful,” Karvelis told Mother Jones. “You have a full-on education crisis. We have one full generation who have had their academic future thrown away because of the lack of investment.”

Joe Thomas, president of the state’s teachers’ union, blamed the state’s deep tax cuts for years of lost revenue and squeezed education budgets. He noted that teachers have felt emboldened to act after seeing their peers in West Virginia and Oklahoma. “The struggle is far more than a raise for teachers,” he told Mother Jones. “The struggle is for better schools for our students.”