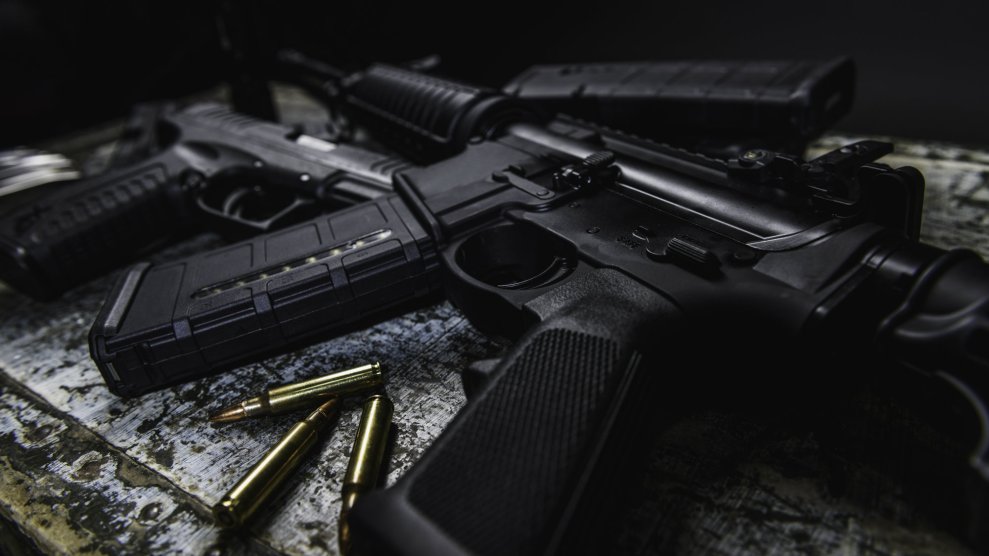 Politicians across the country have debated new gun laws in the wake of the shooting at Marjory Stoneman Douglas High School in Parkland, Florida that left 17 dead, and many state legislators have begun pushing laws that would allow cops to remove guns from people suspected of being threats.

Red flag laws, sometimes called extreme risk protection order laws, allow a judge to issue an order that enables law enforcement to confiscate guns from individuals deemed a risk to themselves or others. Since the Parkland shooting, at least two dozen states have considered enacting similar laws in their states. In Vermont, a red flag law has already passed the both the Senate and House.

“We think this is a sensible approach to put power in the hands of family members who are concerned about [someone] but don’t have any tools in their hands,” says Kristin Brown, the co-president of the Brady Campaign to Prevent Gun Violence.

According to the Brady Campaign, 42 percent of mass shooters exhibited warning signs before committing their crimes. Nikolas Cruz, the 19-year-old responsible for the Stoneman Douglas shooting, was on law enforcement’s radar and the FBI had been alerted about his behavior.

Red flag laws are a fairly simple process. Depending on the state, family members or law enforcement can go to court and seek an order that would allow police to remove guns from the individual’s home and restrict their ability to purchase firearms. The person seeking the order must first fill out a form providing evidence of danger to others or self, then the court holds an expedited hearing. If a judge agrees that the individual is a threat, their guns will be removed for a temporary period that can last from a few weeks to a year.

Right now, only five states—Connecticut, Washington, Indiana, California, and Oregon—have red flag laws, most of them put into place after tragedy struck even though law enforcement and family members knew the individual was a threat.

Connecticut’s statute, known as the risk-warrant law, has been in place since 1999, after a man who had previously attempted suicide and was being treated for depression, used a gun and a knife to murder four colleagues. He then committed suicide.

In 2017, a team of researchers from Duke University conducted a study of the Connecticut law and found that between 1999 and 2006, only about 20 gun removals were made per year. But beginning in 2007, the same year Seung-Hui Cho murdered 32 people at Virginia Tech, the number jumped up to about 100 a year.

California put a similar law into place in 2014 after 22-year-old Elliot Rodger killed six people in a shooting spree in Isla Vista, California. Rodger’s parents, concerned about his mental health, had tried to intervene twice—the first time just one month before the attack, they called his counselor after seeing his bizarre YouTube videos. His counselor alerted law enforcement. Then, before the killing spree, Rodger’s mother called the police after he emailed his manifesto to his counselor declaring his intent to kill. But they were too late.

“He didn’t have a criminal record, he wasn’t legally prohibited from owning guns, and the cops thought they just didn’t have any tools to intervene,” William Rosen, the deputy legal director for Everytown for Gun Safety, explains. According to records obtained by Everytown, 106 orders were issued in California in 2017. Only six orders came from family members, the rest of the petitioners were law enforcement.

But critics of the law say it could infringe on civil liberties.

But the American Civil Liberties Union of Rhode Island released an analysis warning that the proposed legislation could harm certain individuals. “We are deeply concerned about its breadth, its impact on civil liberties, and the precedent it sets for the use of coercive measures against individuals not because they are alleged to have committed any crime, but because somebody believes they might, someday, commit one,” the group wrote in response.

The state’s ACLU listed several concerns regarding the proposed legislation. Among them were giving police broad authority to search the property of an individual subjected to an order, coerced mental health evaluations, and the standard for issuing an order being so broad that it could be used against people using “overblown” rhetoric on social media or against alleged gang members when law enforcement wants to seize legally-owned weapons.

But gun safety advocates insist that these laws follow due process. “There is a very comprehensive process in place,” Rosen says. “We don’t think criticisms hold merit and are, in fact, disingenuous.”