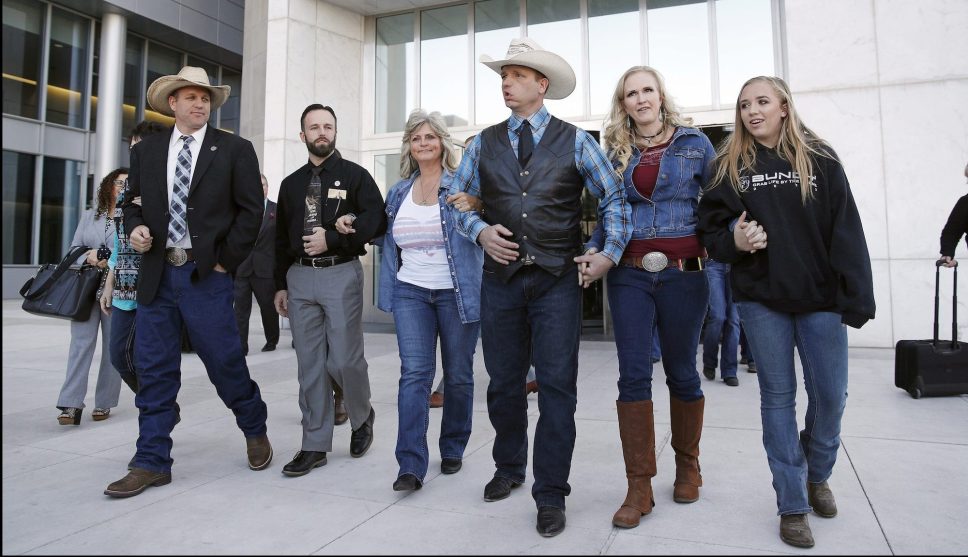 Ryan Bundy, with his family and supporters, leaves a federal courthouse in Las Vegas in December after the judge declared a mistrial in his case. John Locher/AP Photo

Ryan Bundy is not a lawyer. Before he was arrested for his role in the 2014 armed standoff with federal officials trying to impound his father’s trespassing cattle, Bundy was a general contractor with a 20-year history of run-ins with the law. Yet he represented himself during his federal court trial in November, sometimes filing handwritten legal documents filled with conspiracy theories, and he managed to fluster seasoned federal prosecutors in the courtroom. His amateur legal work ultimately helped lead to the dismissal of all the charges against him, his brother Ammon, and his father, the rancher Cliven Bundy.

It was an embarrassing moment for the US Justice Department, and hardly the first one in recent years. The mistrial declared in December marked the fourth time the Bundys and their supporters had bested the Justice Department in court. Three weeks earlier, the government had failed to prevail on most counts in the trial of Ahmed Abu Khattala, the only person tried in connection with the 2012 attacks on the US diplomatic compound in Benghazi that resulted in the death of Ambassador Chris Stevens. And on January 31, a judge threw out all charges against Sen. Robert Menendez (D-N.J.) in a federal bribery case.

The Justice Department’s humiliating defeats in these cases—and in prosecutions of Enron executives, former presidential candidate John Edwards, former Virginia Gov. Bob McDonnell, and other high-profile targets—don’t bode well for what could be the biggest trials in decades: those stemming from special counsel Robert Mueller’s investigation into Russian meddling in the 2016 presidential election.

Justice Department spokeswoman Sarah Isgur Flores scoffs at the notion that the department is flailing. “This is a silly story,” she said in an email in early February. “Just this week, we sent out national press releases on over a dozen guilty verdicts, pleas and sentences—and that doesn’t count the dozens more that would have come out of 94 US Attorney districts across the country this week.”

Prosecutors definitely win more cases than they lose. But the overwhelming majority of those guilty verdicts come in cases that never go to trial. And a notable number of the most significant prosecutions that do go to trial have been debacles for the Justice Department, due in part to overreaching in indictments and widespread prosecutorial misconduct.

Ninety-eight percent of all convictions in the federal criminal system come as a result of plea bargains. The number of actual criminal jury trials in federal court has plummeted over the past few decades. Between June 2016 and June 2017, federal courts saw more than 75,000 criminal cases filed. Only about 1,500 of those went to a jury trial, about half the number of trials in 2000, even though the number of criminal cases was around the same. Of the cases that do go to trial before a jury, the majority last a single day. In 2016 in Nevada, where Cliven Bundy and his supporters were tried, there were 71 criminal trials in federal court before both judges and juries. Of those, 60 lasted one to two days. Not one of them went 20 days or more. The failed Bundy trial, with four defendants, was slated to run six to eight weeks before a mistrial was declared five weeks after the opening statements.

The disappearing trial has many implications. One is a lack of experience among lawyers who are supposed to represent the government before juries. “As fewer and fewer cases go to trial, you’re necessarily going to have fewer and fewer government prosecutors with substantial experience,” says Stephen Vladeck, a law professor at the University of Texas.

I sat through some of the Bundy trial, and the prosecutors’ performance was bad. So bad that Bundy supporters in the peanut gallery were openly mocking it, observing that when Bundy lawyers were getting under the skin of Assistant US Attorney Daniel Schiess, the back of his head would turn bright red. Prosecutors frequently got agitated, sometimes showed up unprepared, and struggled to connect with the jury.

In December, the judge overseeing the case decided that the government’s failure to turn over evidence helpful to the defense, as required by law, amounted to such egregious misconduct that it warranted a full dismissal of the charges. Ian Bartrum, a constitutional law professor at the University of Nevada-Las Vegas, told the Oregonian that the prosecutors were arrogant and failed to take the case seriously. “There was this mindset: ‘We can kind of just show up to win,”’ he said.

Another problem at the heart of some of the government’s recent losses is the common practice by prosecutors of larding up indictments with every charge under the sun, not necessarily because they’ve got solid goods on a perp, but because the potential sentence for all those crimes is long enough to convince most people to avoid the risk of going to trial.

Without trials, the evidence in a criminal case rarely gets subjected to legal scrutiny or judicial review. But it does in high-profile cases that do go to trial, where it often comes up short. Lucian Dervan, a law professor at Belmont University in Nashville, explains that prosecutors’ habit of putting forward broad theories and laundry lists of charges in order to extract a guilty plea “is less successful when you see those theories tested at trial.”

In the Bundy case, some of the government’s allegations simply weren’t true. For instance, the government claimed that the Bundys had spread false rumors that the ranch was surrounded by snipers, then later admitted that there were indeed snipers surrounding the house. That admission helped sink the case.

The Justice Department’s recurring habit of overreaching on charges in hopes of securing a plea deal could hamper prosecutions resulting from Mueller’s investigation.

The government has had a particularly hard time making corruption charges stick, especially when it’s tried novel theories that attempt to criminalize behavior not normally considered a crime. In 2011, prosecutors indicted John Edwards, a former senator from North Carolina, on campaign finance charges, alleging that he’d used illegal campaign contributions to hide the existence of his mistress and their child from voters during the 2008 presidential campaign. The charges were a reach; as one campaign finance expert told the Washington Post at the time, “It’s not illegal to be a pig.” Less than a year later, jurors acquitted Edwards on one count and deadlocked on the others, leaving him a free man.

A similar phenomenon was at work in the Menendez case, where the government again failed to convince jurors that being sleazy is a crime. The 68-page indictment charged the New Jersey senator with 14 counts of bribery and conspiracy. Some of the charges related to efforts Menendez allegedly made to help arrange US visas for the overseas girlfriends of his longtime friend, Florida ophthalmologist Salomon Melgen, and failing to report gifts from Melgen on his financial disclosure form, including eight flights and a luxury hotel stay in Paris. But the government couldn’t prove that Menendez had explicitly promised to help Melgen in exchange for the gifts, and in January the judge acquitted Menendez on half the charges. Soon afterward, prosecutors dropped the case entirely. (Melgen himself was sentenced Friday to 17 years in prison for Medicare fraud.)

A similar dynamic derailed the McDonnell case, where the government attempted to prosecute the former governor for conduct that was actually legal under Virginia state law, which allowed state politicians to take unlimited loans and gifts from supporters. The former governor and his wife were accused of accepting bribes from the head of a dietary supplement company in the form of thousands of dollars in loans and gifts, including a $6,500 Rolex in exchange for arranging meetings for the man with state officials. The Supreme Court unanimously overturned McDonnell’s conviction, finding that setting up meetings hardly qualified as the sort of “official act” required to trigger a corruption conviction. Chief Justice John Roberts Jr. wrote, ”There is no doubt that this case is distasteful; it may be worse than that. But our concern is not with tawdry tales of Ferraris, Rolexes, and ball gowns. It is instead with the broader legal implications of the Government’s boundless interpretation of the federal bribery statute.”

The Justice Department’s recurring habit of overreaching on charges in hopes of securing a plea deal could hamper prosecutions resulting from Mueller’s investigation. Mueller recently expanded his indictment of former Trump campaign chairman Paul Manafort and his business associate Rick Gates to 32 counts, putting the squeeze on both men to take a plea. The move worked on Gates, who pleaded guilty last week to one count of lying to the special prosecutor, but it only seemed to embolden Manafort, who released a statement reiterating his intention to fight the charges in court.

Perhaps the most worrisome precedent for the government as it brings its case against Manafort is its 2002 prosecution of the Arthur Andersen accounting firm in the wake of the Enron scandal. The firm had instructed its employees to shred documents related to its Enron business not long after discovering it would be the target of a Securities and Exchange Commission investigation. A Justice Department task force made the unusual move of indicting the entire company, and a jury convicted the firm of obstruction of justice. But three years later, the Supreme Court unanimously overturned the conviction based on faulty jury instructions that had largely been crafted by the government and did not require the jury to find that the accounting firm had intended to commit a crime. Another conviction spearheaded by the task force, of four Merrill Lynch employees accused of helping Enron cook its books, was also overturned in federal court.

The prosecutor overseeing both of those cases was Andrew Weissman, the head of the Enron task force, who is now a senior prosecutor working for Mueller on the Russia investigation. Weissman and his colleagues may be tempted to bring sensational charges and focus on outrageous details in the cases stemming from the Mueller investigation. (The indictment of Manafort goes on at great length about his shopping sprees for expensive suits and rugs.) But such an approach could backfire. Like the Bundys, Trump family members are not likely to plead guilty should they be charged, and Manafort has shown no signs of willingness to skip the trial. So the government will have to be on extremely solid ground to convince a jury of its allegations. Like McDonnell’s Rolex and Menendez’s five-star vacations, fancy men’s suits may not be enough to persuade a jury, or the American public, that a crime has been committed.