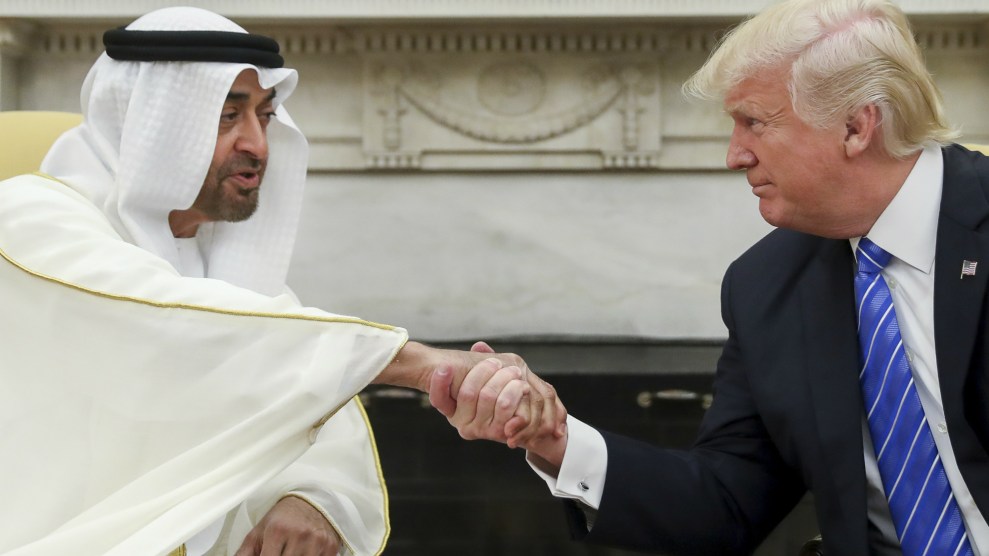 Special counsel Robert Mueller has expanded his investigation to look into the Trump White House’s ties to a Lebanese-American businessman who works closely with the de facto ruler of the United Arab Emirates, the New York Times reports.

Saturday evening, the Times reported that Mueller has interviewed George Nader, a businessman with long standing ties to the Middle East. Mueller has also pressed other witnesses about what role Nader might have played in trying to influence the White House and possible attempts by the UAE to buy influence during the presidential campaign. Since his election, Trump has forged a close relationship with the UAE After feuding broke out last year between Qatar, a close US ally in the Persian Gulf and the home of a large US air base, and other Arab states, including the UAE, the Trump administration loudly sided with Qatar’s opponents—even over the objections of Secretary of State Rex Tillerson.

The Times reported that Nader, who has been working as an adviser to Abu Dhabi’s Crown Prince Mohammed bin Zayed al-Nahyan, the de facto rule of the UAE, has also worked closely with a top Trump fundraiser, a businessman named Elliott Broidy. Broidy has had significant access to Trump, according to the report.

In one example of Mr. Nader’s influential connections, which has not been previously reported, last fall he received a detailed report from a top Trump fund-raiser, Elliott Broidy, about a private meeting with the president in the Oval Office.

Mr. Broidy owns a private security company with hundreds of millions of dollars in contracts with the United Arab Emirates, and he extolled to Mr. Trump a paramilitary force that his company was developing for the country. He also lobbied the president to meet privately “in an informal setting” with the Emirates’ military commander and de facto ruler, Crown Prince Mohammed bin Zayed al-Nahyan; to back the UAE’s hawkish policies in the region; and to fire Secretary of State Rex W. Tillerson.

Nader also reportedly made numerous trips to the White House himself, and met with former Trump senior adviser Stephen Bannon and Jared Kushner.

Trump began openly bashing Qatar as a major source of terror in June of last year, not long after he visited Saudi Arabia, a close ally of the UAE (even though Trump once tried to open a hotel in Qatar, and in 2015 on the campaign trail declared that Qatar’s airport made America look like “the third world” by comparison). Last year the Washington Post broke a story that Erik Prince, the founder of Blackwater military contractors and the brother of Secretary of Education Betsy DeVos, had worked with UAE officials to set up backchannel communications between the Trump administration and Russian president Vladimir Putin.