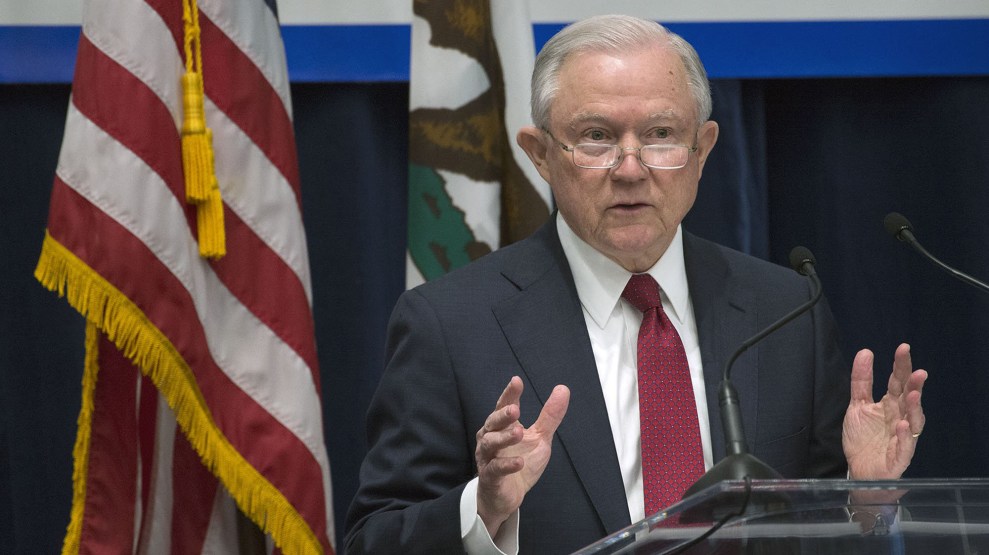 Attorney General Jeff Sessions on Thursday declined to appoint a second special counsel, who would be charged with investigating matters related to a series of 2016 probes related to Hillary Clinton and Donald Trump. But Sessions left open the possibility of making such an appointment in the future.

Last year—after Sessions’ deputy, Rod Rosenstein, appointed Special Counsel Robert Mueller to oversee the investigation into Russian interference in the presidential election—GOP lawmakers began urging Sessions to use the same statute to appoint a prosecutor to investigate the Department of Justice and the FBI. In the months that followed, more Republicans have piled on, suggesting that a new special counsel probe could look into the handling of investigations into Clinton’s emails and foundation, as well as allegations that the FBI abused the process for obtaining a secret warrant in order to surveil Trump campaign adviser Carter Page.

In a letter Thursday, Sessions declined to make such an appointment—for now. He argued that the circumstances do not necessarily warrant the a second special counsel at this time. In place of a special counsel, Sessions stressed that concerns raised by Republicans are being investigated by the Justice Department Inspector General as well as by the US attorney in Utah, John Huber, whom Sessions has personally tasked with determining whether a special counsel is warranted and what other steps the Justice Department should take. The letter was addressed to Senate Judiciary Committee chairman Chuck Grassley (R-Iowa), House Judiciary Committee chairman Bob Goodlatte (R-Va.) and House Oversight and Government Reform chairman Trey Gowdy (R-S.C.).

These three Republicans and others have advocated a special counsel to open investigations into matters related to Clinton’s use of a private email server, her family foundation, and the bogus Uranium One “scandal.” In March, Goodlatte and Gowdy informed Sessions that a special counsel should also investigate alleged FBI misdeeds documented in the infamous Nunes Memo, which alleged that the bureau improperly obtained a surveillance warrant on Page. Trump’s personal attorney, Jay Sekulow, has also publicly called on Sessions to appoint a special counsel to investigate the FBI.

Sessions’ involvement in a decision to appoint a special counsel—or even his decision to respond to these requests—is in apparent violation of his repeated promises to recuse himself from investigations related to Clinton and the presidential campaign. Though he declined to appoint a special counsel Thursday, he did not bow out of the decision-making process. “Please contact me personally if you have any additional questions or concerns,” Sessions told the Republicans in his letter.