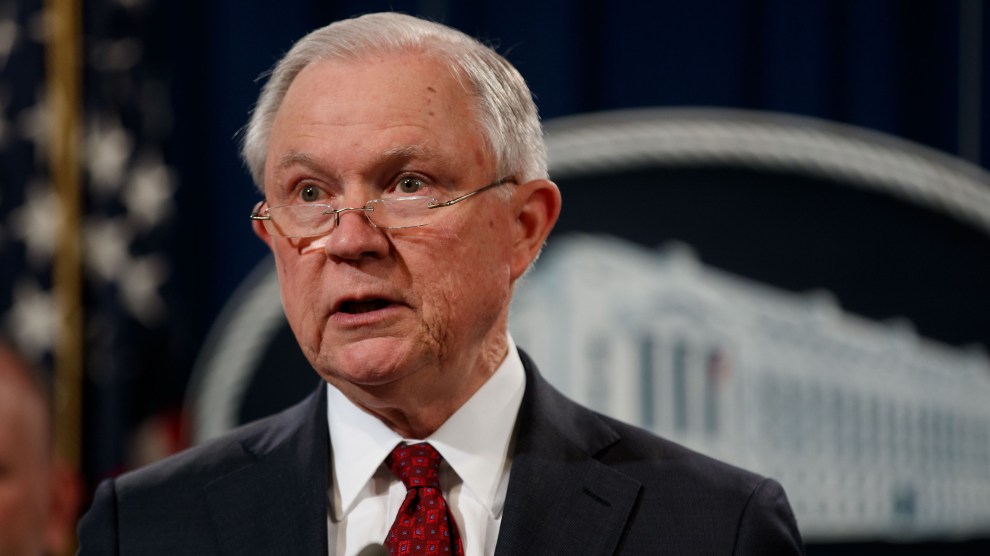 Last April, when a federal judge in Hawaii blocked the Trump administration’s effort to ban entry to people from six Muslim-majority nations, Attorney General Jeff Sessions took to conservative talk radio to vent his frustration. “I really am amazed that a judge sitting on an island in the Pacific can issue an order that stops the president of the United States from what appears to be clearly his statutory and constitutional power,” he told host Mark Levin.

Residents of Hawaii pointed out that it was every bit as much a state as the other 49, but Sessions was making a broader legal point, one that the Supreme Court will now consider. The Justice Department wants to permanently remove the ability of federal judges to issue nationwide injunctions—orders that stop a policy from taking effect until the court has officially ruled on its legality. Instead, a Hawaiian judge overseeing a travel ban case brought by the state of Hawaii would be able to block the ban only in that state. The implications, if the Supreme Court agrees with the Justice Department, will be enormous for the future of judicial review and the federal government’s balance of power.

Federal courts have repeatedly blocked the administration’s efforts to implement a hardline immigration agenda. More than a year into Donald Trump’s presidency, attempts to crack down on sanctuary cities, end Obama-era deportation protections for Dreamers, and block nationals from Muslim-majority countries have been stopped by federal judges enacting nationwide injunctions.

In January, the Justice Department asked the Supreme Court to find that the global injunction against its travel ban was overly broad. The same month, the court agreed to consider the issue. Its ruling, expected in June, could affect not only the administration’s immigration crackdown but the ability of future presidents to keep their controversial—and possibly unconstitutional—agendas in place while they’re being challenged in court.

The Trump administration is not the first to be frustrated by federal judges unfriendly to its policies. In the final years of the Obama administration, federal judges in Texas halted President Barack Obama’s attempt to provide deportation relief to more undocumented immigrants, a Labor Department rule that would have boosted wages, and a Department of Education policy on treatment of transgender students in public schools. Once in office, Trump began to experience the same frustrations. After the Hawaii ruling, Justice Department spokesman Ian Prior criticized a system in which “a flawed opinion by a single judge can block the president’s lawful exercise of authority to keep the entire country safe.”

The nationwide injunction in the travel ban case “continues a deeply troubling trend in the lower courts of entering relief that extends well beyond the parties” to a given case, the Justice Department stated in its brief to the Supreme Court. “Constitutional and equitable principles require that injunctive relief be limited to redressing a plaintiff’s own cognizable injuries.” The government’s position, in other words, is that the lower courts should be able to issue an injunction only for the individuals or states who bring the lawsuit. Everyone else would continue to be subject to the policy in question until the court issues a final opinion.

The implications, if the Supreme Court agrees with the Justice Department, will be enormous for the future of judicial review.

While the Justice Department prepares to make its case against nationwide injunctions in court, Sessions remains preoccupied with the issue. In a speech Saturday at a symposium hosted by the conservative Federalist Society, he focused on the issue, describing nationwide injunctions as “limitless” and “unconstitutional.” He called the judges who issue them “super legislators” who abuse their power to overrule the legislative and executive branches. The Supreme Court, he said according to his prepared remarks, “must end government-by-litigation.  I am hopeful that soon they will, and that—with your help—we will restore the rule of law in this country.”

The government is entering a debate that has largely played out in academic circles. Several legal scholars, mostly conservatives, have argued that nationwide injunctions are beyond the constitutional authority of the judicial branch. “I think the injunction should protect the individual plaintiffs who are suing,” says Samuel Bray of the University of California-Los Angeles School of Law, whose work has shed light on the increasing frequency with which courts have issued broad injunctions in recent years.

On the left, lawyers and scholars believe nationwide injunctions protect civil rights and are a critical tool to prevent government overreach. The debate is “really about what you think the role of the courts should be,” says Amanda Frost, a constitutional law expert at American University’s Washington College of Law. “My view is the courts need the power to curb or check the power of the executive branch.” What if a state passed an illegal voter restriction law right before an election and got sued by a disenfranchised voter? Without the nationwide injunction as a tool, she says, that could affect the outcome of an election; it wouldn’t make sense to restore voting rights to just the one person who sued.

The biggest problem with nationwide injunctions is what is known as “forum shopping.” That’s when a group strategically files a lawsuit in a jurisdiction where the judges will be friendlier to its position. For Republicans during the last administration, Texas was the best place to file suits—conservative judges there reliably backed their claims. Under Trump, suits have come in blue states such as California and Hawaii. Frustration at forum shopping is bipartisan. “When there is a Republican president, Republicans don’t like” nationwide injunctions, says Frost. “When there’s a Democratic president, Democrats don’t like them.” The Justice Department, as an institution, resists injunctions that hinder its ability to carry out the government’s work, so Frost and Bray both find it unsurprising that the department would ask the Supreme Court to limit them.

The increased scrutiny of judges’ use of nationwide injunctions is already having an effect, Frost says. When issuing injunctions, judges are beginning to include written justifications of them. “We can’t assume this is proper anymore,” says Frost. “We have to talk about it.”

Despite agreeing to hear the travel ban case, the Supreme Court won’t necessarily decide on the fate of nationwide injunctions. If the court agrees with the government that the ban is constitutional, it would have no reason to reach a decision on the secondary question of whether the injunction is overly broad. But the justices could get a second shot next term. The government is making the same argument in another case over the Justice Department’s attempt to crack down on sanctuary cities. In that suit, currently before the 7th Circuit Court of Appeals, the government’s briefs go into much more detail to support its position that injunctions should apply only to the parties in a case.

“At some point, the court is going to have to decide it,” says Bray. “Because the status quo is just not tenable.”