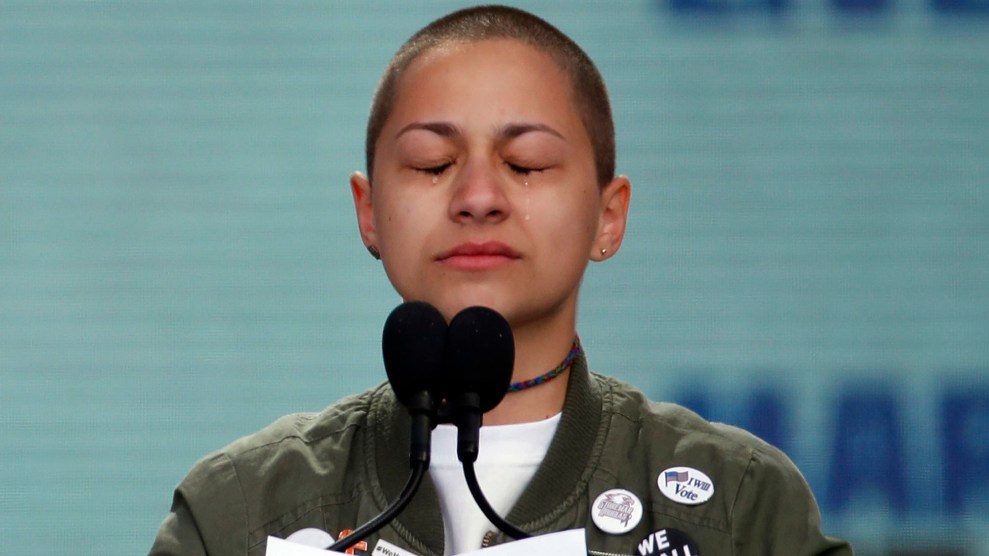 Emma Gonzalez speaks at the "March for Our Lives" rally in support of gun control in Washington, DC, March 24, 2018.Alex Brandon/AP

“Six minutes and about 20 seconds. In a little over six minutes, 17 of our friends were taken from us.” That’s how Emma Gonzalez, a senior at Marjory Stoneman Douglas High School and one of the organizers of the March for Our Lives, began her remarkable speech on Saturday afternoon at the rally in Washington, DC.

After reading the names of her classmates who were killed in the mass shooting, Gonzalez stood at the podium in silence for six minutes, fighting back tears. It was an incredible, chilling moment. All of the major cable networks carried it live. “Loudest silence in the history of US social protest,” my colleague David Corn tweeted.

“Never again,” many in the crowd of 500,000 chanted in response. After her timer went off, Gonzalez said, “since the time when I came out here, it has been six minutes and twenty seconds. The shooter has ceased shooting and will soon abandon his rifle, blend in with the students as they escape, and walk free for an hour before arrest,” she said. “Fight for your lives before it’s someone else’s job.” And then she left the stage.

Gonzalez speech capped a remarkable day of speeches by students who spoke out about the epidemic of gun violence in the US. They shared their haunting stories and called on Congress to take action to stop the killing. “To those people that tell us that teenagers can’t do anything, I say that we were the only people that could have made this movement possible,” said Gonzalez’s MSD classmate Alex Wind, a junior. “To all of the politicians who have taken money from the NRA, you have chosen death.”

MSD junior Alex Wind: "People believe that the youth of this country are insignificant … To those people that tell us that teenagers can't do anything, I say that we were the only people that could have made this movement possible." #MarchForOurLives pic.twitter.com/Mi1ym1vSsX

On February 14, MSD senior Samantha Fuentes was shot in both legs and had shrapnel in her eye. “Day in and day out, our kids are getting shot up,” she said in an impassioned speech on Saturday. “And the moment we speak up, we’re scolded that we are not old enough. It’s as if we need permission to ask our friends not to die. Lawmakers and politicians will scream guns are not the issue. But can’t look me in the eye.” She then paused, put her hand over her mouth, and vomited on stage. Amazingly, she pulled herself together and finished the speech.

Hey, lawmakers: This girl was shot by an AR-15 five weeks ago, vomited on international TV, and still managed to deliver a killer speech on gun reform and inspire thousands to make a difference in gun legislation.

What have you done lately to help? #MarchForOurLives https://t.co/nldtGzU6Co

She ended by singing happy birthday to one of her fallen classmates, Nicholas Dworet, who would have turned 18 on Saturday.