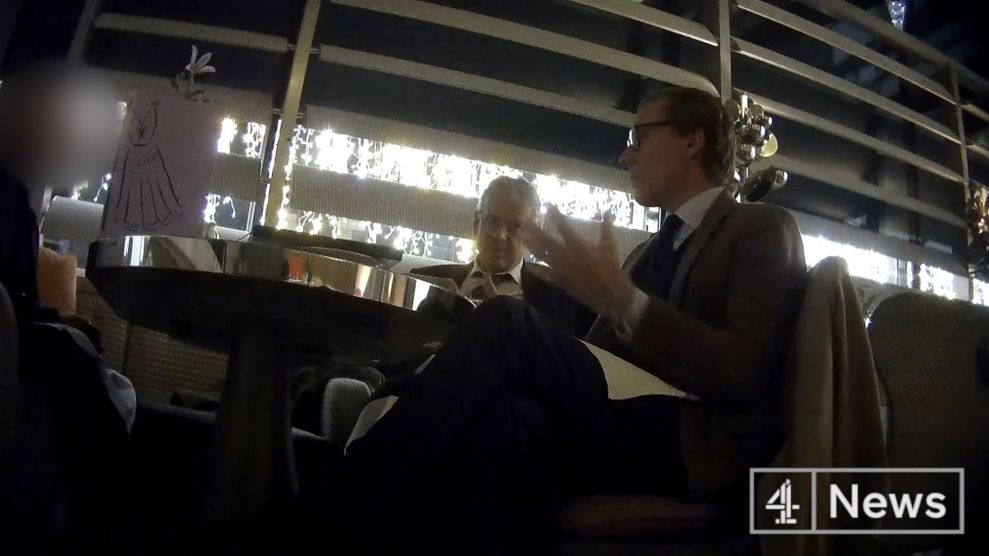 An undercover video report by Britain’s Channel 4 has captured footage of top executives at Cambridge Analytica, the controversial data-analytics firm that worked on Donald Trump’s 2016 presidential campaign, talking about sending Ukrainian “girls” to the home of an opposition candidate and covertly spreading propaganda online.

According to Channel 4, an undercover reporter for the network spoke with top officials from Cambridge Analytica on five separate occasions between November 2017 and January 2018 at different locations in London. The reporter posed as a “fixer” for a client hoping to influence Sri Lankan elections. One of the recorded meetings and a subsequent phone call included Cambridge CEO Alexander Nix.

On Saturday, a former employee for Cambridge Analytica went public with allegations that the company had harvested the Facebook data of 50 million people without their knowledge in a scheme that may have violated Facebook’s terms of services and data privacy laws. Facebook responded to the allegations by suspending Cambridge from accessing its platform until it had investigated the allegations. The company denied the charges, saying in a statement that ​it “fully complies with Facebook’s terms of service and ​is currently ​in touch with Facebook ​following its ​recent statement​ that it had suspended the company from its platform, in order to resolve this matter as quickly as possible​.” The company also denied allegations that it misused Facebook data as reported this weekend by the Observer, New York Times, and Channel 4.

On Monday, Cambridge Analytica responded to Channel 4’s undercover report. “The report is edited and scripted to grossly misrepresent the nature of those conversations and how the company conducts its business,” the statement says. The statement includes this quote from Nix: “In playing along with this line of conversation, and partly to spare our ‘client’ from embarrassment, we entertained a series of ludicrous hypothetical scenarios. I am aware how this looks, but it is simply not the case. I must emphatically state that Cambridge Analytica does not condone or engage in entrapment, bribes, or so-called ‘honeytraps,’ and nor does it use untrue material for any purpose. I deeply regret my role in the meeting and I have already apologized to staff. I should have recognized where the prospective client was taking our conversations and ended the relationship sooner.”

The first segment of Channel 4’s undercover report aired Monday afternoon. The footage shows that, in response to a question about obtaining opposition research on political candidates, Nix says his firm could “send some girls around to the candidate’s house.” He adds that Ukrainian girls “are very beautiful, I find that works very well.”

Here is the full exchange, according to a Channel 4 preview of the segment:

Reporter: “For example you’re saying when you’re using the girls to introduce to the local fellow and you’re using the girls for this, like the seduction, they’re not local girls? Not Sri Lankan girls?”
Nix: “I wouldn’t have thought so no, we’ll bring some, I mean it was just an idea, I’m just saying, we could bring some Ukrainians in on holiday with us you know, you know what I’m saying.”
Reporter: “They are very beautiful Ukrainian girls.”
Nix: “They are very beautiful, I find that works very well.”
(…)
Nix: “And the answers are hypothetical and that’s really important is, is please don’t pay too much attention to what I’m saying because I’m just giving you examples of what can be done and what, what has been done. The right solution will be made for the right, for your problem.”

In another instance, Nix describes how to allegedly entrap a political candidate with a purported business offer. “We’ll offer a large amount of money to the candidate, to finance his campaign in exchange for land for instance,” he says. “We’ll have the whole thing recorded, we’ll blank out the face of our guy, and we post it on the Internet.”

At a January 2018 meeting, Nix also speaks about Cambridge’s supposed methods for going undetected in its efforts to influence campaigns:

“…we have a long history of working behind the scenes you know, many of our clients don’t want to be seen to be working with a foreign company… So often we set up, if we are working then we can set up fake IDs and websites, we can be students doing research projects attached to a university, we can be tourists, there’s so many options we can look at. I have lots of experience in this.”

Former Cambridge employees who’ve spoken to Mother Jones describe Nix as a consummate salesman who wouldn’t shy away from saying whatever was necessary to win new business—without always following through on those pledges. “Alexander was always entertaining when meeting prospective clients,” one former Cambridge staffer told me.